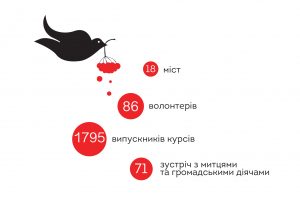 MOVA UA’s main project “Free Ukrainian Language Courses” has already been running for three years and boasted as many as 1795 graduates for the time being. Over 80 activists affiliated with the project are currently engaged in the volunteer work for popularization of Ukrainian language, book publishing and literary culture throughout the territory of Ukraine. The idea of launching Free Ukrainian Language Courses emerged in 2012 in response to adoption of the odious Law “On Languages”. Back then, civil activists and philologists joined their forces so as to build and activate an extensive network of non-formal language courses for those Ukrainian citizens who would have liked to achieve proficiency in the Ukrainian, however, had no opportunity to study the state language or was lacking access to enabling language environment.

As of today, the project covers 18 regions with standing participation of over 80 volunteers and has a special focus on Eastern Ukraine. The language courses are permanently held in the controlled territories (Sievierodonetsk, Mariupol, Druzhkivka, Kramatorsk. Slovyansk, Konstantinivka), and also in Kyrovohrad, Zhytomyr,Vinnitsya, Herson, Kharkiv, Dniepr, Zaporizhia, Nikopil, Chernyhiv.

Despite the fact that the courses held in Donetsk, Luhansk, Sevastopol have been suspended upon escalation of the armed conflict, the resettlers from the said regions are able to attend the courses in Kyiv, Lviv and Ternopil specially organized for such purposes. Of note, 687 resettlers subscribed for Free Ukrainian Language courses last year.

Apart from teaching Ukrainian language, we co-operate with locally-based activists on organizing various social and culturally oriented actions, such as meetings with creative artists, “Books for Eastern Ukraine”, “Book Forum on Wheels”, “Mykolaychiki (Gifts for the Day of St. Nicholas) for Eastern Ukraine”, charity assistance to Ukrainian soldiers and orphanages.

VIDEO | NEW PROJECT: IN THE EAST AND SOUTH OF UKRAINE MANY DON’T SPEAK UKRAINIAN

«If there are more books out there at the East, and if those books are read, then maybe, we won&