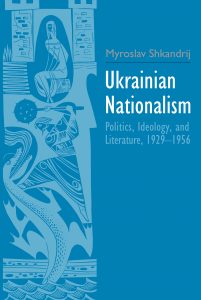 By Myroslav Shkandrij, Professor of Slavic Studies at the University of Manitoba.

Both celebrated and condemned, Ukrainian nationalism is one of the most controversial and vibrant topics in contemporary discussions of Eastern Europe. Perhaps today there is no more divisive and heatedly argued topic in Eastern European studies than the activities in the 1930s and 1940s of the Organization of Ukrainian Nationalists (OUN).

This book examines the legacy of the OUN and is the first to consider the movement’s literature alongside its politics and ideology. It argues that nationalism’s mythmaking, best expressed in its literature, played an important role. In the interwar period seven major writers developed the narrative structures that gave nationalism much of its appeal. For the first time, the remarkable impact of their work is recognized.

““Ukrainian nationalism” frequently eludes lucid characterization and contextualization, not to mention sober understanding. At this critical time, Shkandrij’s important book sets out to change this state of affairs. He places the ideological tenets and historical actions of the Organisation of Ukrainian Nationalists within a broader socio-historical and cultural frame, a refreshingly original approach that allows us to see contestation not only within Ukrainian nationalism but also within the OUN itself.”—Rory Finnin, University of Cambridge.