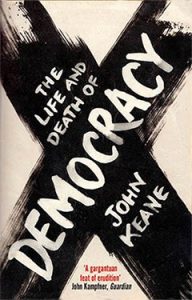 By John Keane, Professor of Politics at the University of Sydney and at the Wissenschaftszentrum Berlin (WZB).

The Life and Death of Democracy will inspire and shock its readers. Presenting the first grand history of democracy for well over a century, it poses along the way some tough and timely questions: can we really be sure that democracy had its origins in ancient Greece? How did democratic ideals and institutions come to have the shape they do today? Given all the recent fanfare about democracy promotion, why are many people now gripped by the feeling that a bad moon is rising over all the world’s democracies? Do they indeed have a future? Or is perhaps democracy fated to join the poor dodo and the forests of Easter Island in the land of extinction?

The work of one of Britain’s leading political writers, a man whose work on democracy is of ‘world-wide importance’ (The Times), this is no mere antiquarian history. Stylishly written, this superb book confronts its readers with an entirely fresh and irreverent look at the past, present and future of democracy. It unearths the beginnings of such precious institutions and ideals as government by public assembly, votes for women, the secret ballot, trial by jury and press freedom. The Life and Death of Democracy explains how and why democracy spread in modern times to Latin America, Africa and Asia. It tracks the changing, hotly disputed meanings of democracy; retells the best jokes about it; and describes quite a few of the extraordinary characters, many of them long forgotten, who dedicated their lives to building or defending democracy. The book proposes that we are now living in a new age of ‘monitory democracy’, explains why it is potentially the best form of government on earth – and why democracies everywhere are sleepwalking their way into deep trouble.