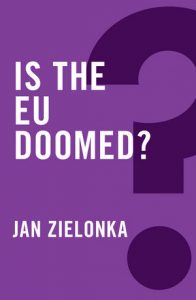 The European Union is in crisis. Crippled by economic problems, political brinkmanship, and institutional rigidity, the EU faces an increasingly uncertain future.

In this compelling essay, leading scholar of European politics, Jan Zielonka argues that although the EU will only survive in modest form – deprived of many real powers – Europe as an integrated entity will grow stronger. Integration, he contends, will continue apace because of European states’ profound economic interdependence, historic ties and the need for political pragmatism. A revitalized Europe led by major cities, regions and powerful NGOs will emerge in which a new type of continental solidarity can flourish.

The EU may well be doomed, but Europe certainly is not.

“Zielonka offers a new and refreshing vision of Europe’s future – one that chimes perfectly with the EU’s motto ‘United in Diversity’.”
Giuliano Amato, former Prime Minister of Italy

“A provocative and thoughtful book which comes at a critical moment for European integration.”
Lionel Barber, Financial Times

“Jan Zielonka is one of the most original and sophisticated observers of European politics. So when he expresses disillusion with both the EU and its Member States we should pay attention to where he thinks we are heading. This lucid and incisive book is a key source for understanding the current impasse.”
Christopher Hill, University of Cambridge

“The EU may be not doomed but it is in deep crisis. In this provocative book Jan Zielonka offers an original and controversial proposal for a radically different model of European integration.  Challenging conventional views he considers the prospects of a ‘neo-medieval’ Europe composed of networks of cities, regions and ONG’s where a ‘polyphony’ among actors will replace the current cacophony of the centres.”
Josep Borrell Fontelles, former President of the European Parliament and former President of the European University Institute

“Jan Zielonka has written a punchy, incisive and devastating account of the EU and its malaise after the financial crisis. He combines his plea to move away from ‘sanctimonious protestant preaching’ with a convincing sketch of how a more chaotic pattern of networks between cities, provinces but also a wide range of social and corporate institutions might produce a more durable, effective and also legitimate governance.  The treatment is eloquent but also wise.”
Harold James, Princeton University

“A fascinating and thought-provoking book that will change our view of the EU as neither a true state nor an ever-changing cacophony of nations.”
Josef Joffe, Stanford University and Editor of Die Zeit

“Jan Zielonka’s brilliant analysis of European disintegration is packed with big ideas that are elegantly expressed. It acts as an original and iconoclastic challenge to both the euro-sceptic and the euro-federalist discourses on the crisis. This is a must-read book for anyone who cares about the future of Europe.”
Mark Leonard, Director of the European Council on Foreign Relations

“Whether or not you agree with Jan Zielonka’s arguments, you will find this book a stimulating read. I’m sure it will provoke much discussion about the future development of the European Union.”
Lord Patten of Barnes CH, Chancellor of the University of Oxford and former European Commissioner for External Affairs

“A brilliant and profoundly original analysis of the European Crisis.  A work of optimism, as well!”
William Pfaff, Author and Syndicated Columnist

“Zielonka is an intellectual provocateur in the best sense of the word…this book will stimulate debate on Europe’s continuing multinational experiment.”
Foreign Affairs