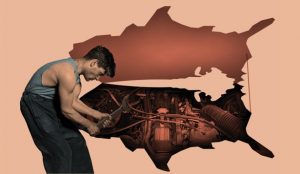 Critical review by Alexander Svitych of Francis Fukuyama paper “The Future of History: Can Liberal Democracy Survive the Decline of the Middle Class?”. The review was first published in Journal of Australian Political Economy, Issue No. 76, Summer, 2015/2016 : 141-146. Photo credit: Jackie Lay

Francis Fukuyama is probably best known for his article and a subsequent book The End of History? published more than twenty years ago. In that work the author argued that history ended with the collapse of the Soviet Union and the reign of liberal democracy and capitalism all over the world. Fukuyama’s position thus contradicted the idea of Karl Marx that communism would eventually replace capitalism. The author coined the term ‘end of history’ not to describe a series of events, but rather as the notion that democracy would become more established since the ‘ideological evolution’ had ended.[1]

However, in his more recent piece, The Future of History, Fukuyama takes a different stance. Now he says that, in view of the ongoing economic crisis and troubling social trends, a new political and economic ideology needs to be born that ‘could provide a realistic path toward a world with healthy middle-class societies and robust democracies.’[2] Most importantly, this ideology must be created by the middle class and incorporate the concepts of capitalism, democracy and freedom. It is not all plain sailing, of course, as Fukuyama acknowledges. For example, China is posing a serious challenge to liberal democracy, favoring a more authoritarian ‘China model’ to increase social stability, especially since the recent financial crisis. However, Fukuyama contends that this model is still unlikely to become a viable alternative to liberal democracy outside the Asia Pacific due to a number of internal constraints. Nor is the growing middle class in China likely to behave differently compared to the rest of the world.

While the author’s standpoint is clear, he ends up in the sort of ideological dead-end typical of the Western liberal school of thought. This dead-end is caused by the shared assumption that liberalism and democracy must ultimately win. This is why Fukuyama cannot soberly evaluate the problems of the post-crisis society.

Fukuyama claims that we have hit an ideological wall. Capitalism is dying in front of our eyes, and we therefore need a new ideology. We cannot build it on the existing intellectual premises as there are too many restrictions on us. Indeed, these restrictions appeared due to the struggle with the USSR and with spread of communism in general. Since the communist project is no longer relevant, all the barriers can be removed now. Yet Fukuyama emphasizes four political economic features that must be retained under all circumstances – private property, freedom, democracy, and the middle class. It is clear why the middle class appears in this list. This is the class that requires private property, freedom and democracy. The poor do not need these values, as they do not help them to become better off. At the other extreme, the rich may not need freedom and democracy, as they can protect their property themselves. In this regard, the middle class becomes an essential link.

The view that capitalism is endless by default is supported by liberal political thought and neoclassical economics. This is the reason why the new philosophy, as proposed by Fukuyama, will be nothing but a non-structural refurbishment of capitalism. In the aftermath of the global financial crisis that emerged in 2008, the world’s leading economists made a call through their political elites, global institutions and transnational corporations for a more ethical form of capitalism, rather than revision of the model itself.

Is such renewal possible? To answer this, it is first necessary to understand how the idea of the collapse of capitalism got into the communist ideology. It was articulated by Karl Marx and follows from the Marxist theory of the change of socioeconomic formations.[3] But why did Marx decide to elaborate this theory? As a scientist – not as an ideologist or agitator – he was critically engaging with political economic ideas that appeared at the end of the 18th century, developed by Adam Smith and David Ricardo. According to Smith, the level of division of labor in a particular society is limited by the size of this society, i.e. by the market. The larger the market, the more differentiation of labor is possible. A small hospital operating in a small town will have a few physicians; while a large hospital serving a large population can have many specialists that a small town (market) cannot support. The growth of the market will increase the division of labor and, hopefully, will generate bigger profit. A simple yet important consequence follows – further division of labor can be made only by means of market expansion. According to Marx, yet more profound contradictions limit the expansionary prospects of capitalism: class conflict and deepening crises open up the prospect of a change to communism.

Today we are observing the situation where capitalism is literally everywhere, and the globalization of capitalist economy has reached its limits.[4] As a result, further division of labor is not possible in the existing economic paradigm. Something can be done in particular industries, of course, but not in the whole economy. The current economic crisis is therefore a general crisis of capitalism. The system has run out of resources for development, and the world can no longer move forward in the grip of the capitalist ideology. Not only have corporate globalization and capitalist growth mainly benefited the interests of the few while disregarding those of the public, they have also increased polarization between the rich and the poor, exacerbated environmental degradation, prioritized the needs of transnational corporations over the needs of society, and aggravated global inequality and injustice. Capitalism’s insatiable drive for expansion is no longer sustainable, as it destroys communities and extinguishes the world’s natural resources.

Fukuyama’s emphasis on the need to adapt the variety of capitalism, rather than denouncing it, is therefore not persuasive. We have not arrived at the end of history; the changing political economic conditions may indeed render another major change necessary. Fukuyama’s failure to consider this possibility is symptomatic of the conservative elements in the Western philosophical tradition, ignoring the insights of Marx and other scholars of fundamental socio-economic change.

Fukuyama’s attempt to advocate for the middle class as the bearer of the new ideology is subject to similar criticism. The former existence of the USSR as an alternative to capitalism created fears that induced the elites to share some of their profits in the interests of social stability. From the economic point of view, however, the middle class can only exist with continuous economic growth, as it is created and maintained under the conditions of broadening production and increasing consumer demand via bank loans. Fukuyama’s failure to engage with the bigger issue of the prospective end of capitalism devalues considerably his rhetoric on the future of history. Why should we expect continuity of the same policies that led Western capitalist society to emphasize liberal ideas, democracy, and the middle class? Under the current crisis, this population stratum will no longer be a socially-necessary factor, similarly to what happened to the proletariat in the second half of the 20th century. The inequality gap between the very rich and the very poor has been growing at an alarming rate in recent decades, and is squeezing the middle class in both developed and emerging economies, as warned by the World Economic Forum.[5] The question of who can replace the middle class remains open in this regard.

The tragedy of Western economic thought as represented by Fukuyama’s writing is that it cannot recognize the current crisis as marking the end of the paradigm of scientific and technological progress. While some speak about the ongoing end of the Westphalian epoch, we are now witnessing the signs of the end of the long–spanning modern epoch that has lasted for about five hundred years. As in the past, a new epoch is bound to bring new social, political and economic forms of existence.

In summary, while Fukuyama presents an attempt to revise the concept of ‘the end of history’ into ‘the future of history’, he targets the form rather than the essence of the concept. He follows political elites in their choice of capital as a lead agent in the process of historical development. He serves ideologically those who advocate intensification rather than revision of the model of corporate globalization that had brought so many negative consequences over the last few decades. What Fukuyama fails to see, or purposely evades, is that the crucial issue today is to find a new development mechanism and a new language that can describe it. He notes in The Future of History that: “The alternative narrative is out there, waiting to be born.”[6] Indeed, those who achieve an understanding and description of this narrative will become civilization’s champions for the next decades, if not centuries.

[2] Francis Fukuyama, The Future of History. Can Liberal Democracy Survive the Decline of the Middle Class?, Foreign Affairs, January/February 2012, http://www.foreignaffairs.com/articles/136782/francis-fukuyama/the-future-of-history

[3] Marx and Engels’ scientific and theoretical understanding of the change of the social-economic formations (from primitive communal to ancient, feudal, capitalist (bourgeois) and inevitably communist) is elaborated in the works The German Ideology, Manifesto of the Communist Party, A Contribution to the Critique of Political Economy, Capital, The Origin of the Family, Private Property, and the State, and others. For Marx’s remarks on the inevitable breakdown of capitalism see, for example, chapter 32 of volume I of Capita, entitled The historical tendency of capitalist accumulation, available at: https://www.marxists.org/archive/marx/works/1867-c1/

[4] The assertion on the limits of growth was already formulated by The Club of Rome, The Limits to Growth (1972). For more recent political economic analysis, data and evidence see, for example, David Harvey, The Enigma of Capital and the Crises of Capitalism (2010).

[6] Francis Fukuyama, “The Future of History. Can Liberal Democracy Survive the Decline of the Middle Class?”, Foreign Affairs, January/February 2012), http://www.foreignaffairs.com/articles/136782/francis-fukuyama/the-future-of-history