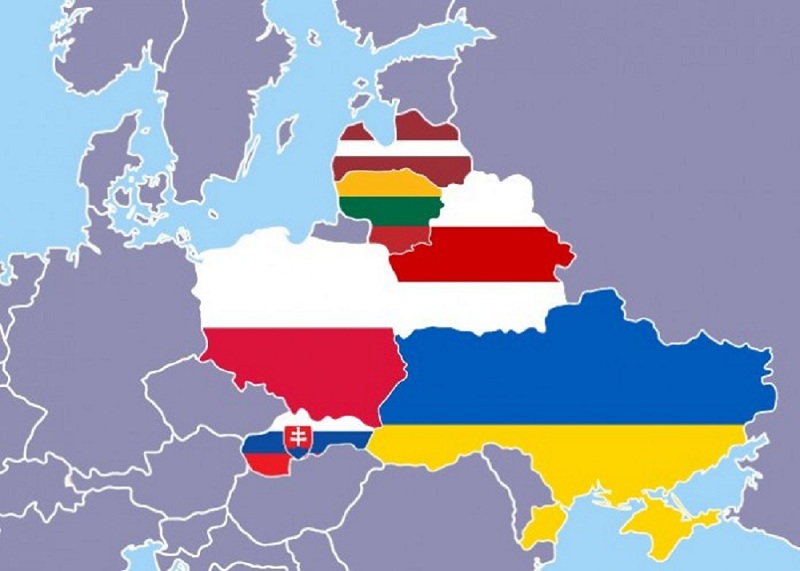 Intermarinium as a political project refers to the federation for Central-Eastern European countries. Jozef Pilsudski introduced this idea after the Word War I. The integration project was to stretch from Adriatic, Baltic to Black Seas, and to include Poland, Latvia, Estonia, Lithuania, Belarus, Ukraine, Czechoslovakia, Hungary, Romania, Yugoslavia, and eventually Finland.  For Pilsudski the proposed federation would introduce multiculturalism of the Polish–Lithuanian Commonwealth. It would also protect certain countries within Central-Eastern Europe from Russian and German political domination. It did not succeed at the time. Lithuanians saw the idea as a threat to their newly founded independence. In turn, Ukrainians considered Intermarinium to challenge their sovereign aspirations. Russia, and most countries of Western Europe, except France, was against such integration. From time to time, potential participants (Belarus, Poland) revived discussions of the project at different periods with various interpretations.

In the XXI century the world around us already looks different. Integration and cooperation between countries is accepted even by most nationalistic movements. After two world wars, European states formed the European Union (EU), scaling their national sovereignty for a more peaceful future in their continent. The EU and NATO offered security and development to those countries that joined them. However, a few former Soviet republics in Eastern Europe were left behind and retained close ties with Russia. Ukraine, Belarus, Moldova, Georgia and some others become lodged within the crossroad between the EU, NATO members, and Russian-lead integration projects (such as Eurasian Custom Union). The West offers help with reform implementations within these countries, as a means to support desires for joining their international organisations. On the other hand, Russia economically and even military attacks states that demonstrate such aspirations. For instance, Georgia and Ukraine experienced Russian military intervention. Other states in the region constantly encounter economic and political pressure from such big neighbor. As an alternative for the EU’s membership, Eastern partnership was formed for Armenia, Azerbaijan, Belarus, Georgia, Moldova and Ukraine. However, this cooperation does not mirror the security guarantees of the EU or NATO.

After the Ukrainian crisis, post-Soviet republics felt threatened by Russian foreign policy. Baltic States, and Poland, remained insecure, although members of the EU and NATO. In this way, Eastern European countries continue to explore new forms of integration. For instance, the old project was relived, when newly elected Polish President, Andrzej Duda, resurrected the idea of Intermarinium in 2015. Indeed, Poland could become an engine for driving the new formation. This is related to the way Poland is often considered to exemplify a successful economic development and beneficial integration into the European Union by its Eastern neighbours. During Ukraine’s recent crisis, Poland played crucial role in pushing the EU for a bigger response to Russian aggression. Ukraine, fighting Russian militants on its territory, and searching for closer connections with Europe, could use the opportunity as a chance of a lifetime.

Baltic States’ officials realized that they could not get reliable military or political-military support from the EU in response to threats from the Kremlin. Therefore, from one side, they see the perspective in cooperation with the countries that have a powerful enough army and ability to repel aggression. From the other side, these partners should have close to Baltic foreign policy grounds. Ukraine and Poland are perfect examples. The current war in Eastern Ukraine and Russian policy towards the West push Poland, Ukraine and the Baltic States for integration and mutual response to new challenges from the common potential enemy. The Alliance could involve also Belarus, however, it could happen only after the change of political regime in the country. Georgia may also be included in this new Intermarinium, due to the similar experience of threats and common goals.

Many scholars see Intermarinium as an alternative to NATO membership for Eastern European states. It will provide a way to accumulate strength against Russian aggressive foreign policy. In the present situation, when NATO membership for these countries becomes objected by Russia, Intermarinium could serve as a vital alternative for security cooperation. Forging a union with NATO members could guarantee greater security for non-members. An attack on one of the Intermarinium member states would activate the alliance, including the countries belonging to NATO. Consequently, a response from NATO would follow. This would make Russia more cautious in its actions.

Intermarinium proves beneficial to all of possible participants. A Polish-Ukrainian political and economic union, together with a military alliance, could bring them on a similar platform as Germany, Britain and France, ahead of Russia. With the Polish population at around 40 million, and Ukrainian at over 44 million, heavy industries and closed industrial production chains, which could compete with European goods within the common market, the Union could prosper. Moreover, Intermarium could serve as the end point for the new “Silk Road” and strengthen member states’ economies due to its favorable geopolitical location, extensive logistic networks, and combined industrial, alonside agricultural potential. The geostrategic position of Intermarinium would give it considerable political weight as well.

The military importance of the Union has a great potential. It would receive trained in battles with a strong rival Ukrainian 250 000 army and 140 000 Polish one. The combined Polish-Ukrainian military budget counts for about 16 billion dollars plus heavy weapons . Additionally, the possibility of placing Anti-Ballistic Missile inside the members’ territories would turn this region into a secure and reliable one. After military unification and the introduction of modern technologies, the United Polish-Ukrainian forces could obtain a role in NATO similarly to France and Britain. The army of the Union could be the strongest on the European continent.

How feasible is the establishment of Intermarinium?

To put it realistically, Intermarinium could not be implemented as an integration project entirely in the nearest future. Presently, it would be difficult for the Baltic states and Poland to achieve a coup, factoring the issues of non-EU members. Additionally, economic difficulties, instability with security, and dependency on Russia further hinder the establishment of the Intermarinium. Ukraine alone is conflated by energy supply troubles, major external debt, and the war in Donbas.

Differing historical memories of the prospective members is another obstacle for the creation of the alliance. Every country in the region wants their neighbours to accept its historical leading role. In reality no Pole would ever agree to be part of a Ukraine-dominated Intermarium, and no Ukrainian would tolerate a Polish-dominated one. Other states in the region have quite the same perspective.

The actual actions in creating Intermarium will only then be taken, once the idea is embraced by wider social groups and becomes a viable political trends for all potential member states. Then such union could bridge these Eastern European countries closer to joining the EU. For example, it could promote the transformation of Eastern Partnership into a new integration project.

If the core goal of Intermarium is to deter possible threats from the East, the establishment of joint military units is necessary. This would involve a unification of military forces, and synchronization of military doctrines among future members. A collective Lithuanian-Polish-Ukrainian military brigade is already possible. Establishing such a brigade could be one of the first steps in creating the Bloc.

To conclude, creating an Intermarium could provide an integration alternative for Eastern Europe during the present crisis of such organisations  as the OSCE, the EU and NATO. After Brexit, the Intermarinium project was also seen as one of the forecast options for ensuring the existence of the EU. The new alliance substitute NATO and the EU. It can furthermore serve as an initial stage for Eastern European countries to join the NATO and the EU. From the other way of thinking, it provides the potential for developing a new form of integration, with the capacity to becoming a power bloc. Nevertheless, it is Eastern European societies that have to transform Intermarinium into a tangible prosperous reality for their countries.