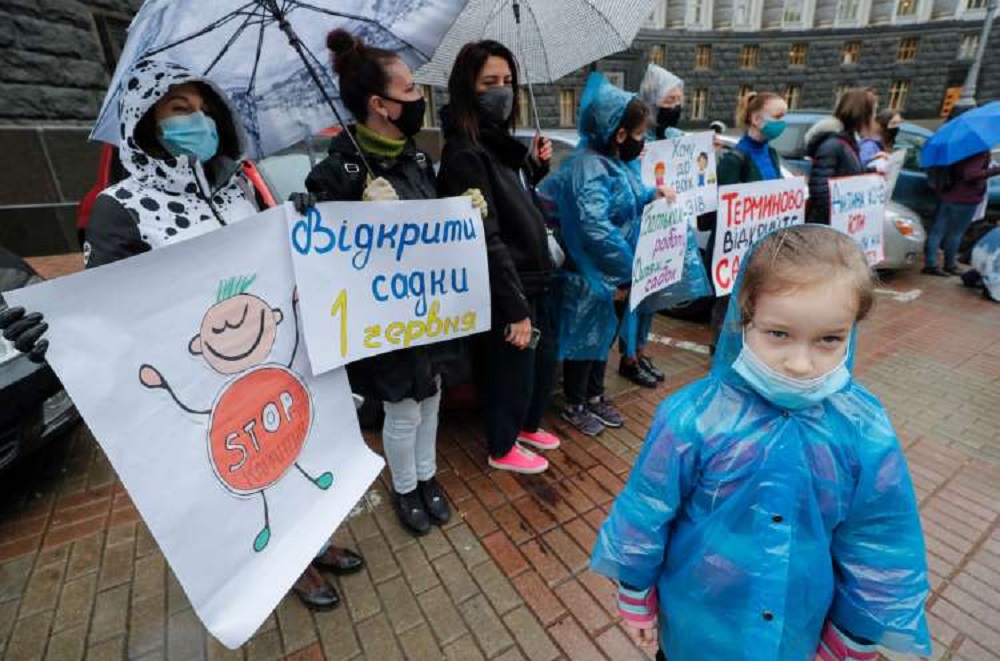 Ukrainians wearing protective face masks hold placards during a protest in front of the Cabinet of Ministers building in central Kyiv on Tuesday. (Sergey Dolzhenko/EPA-EFE/Shutterstock)

The article was originally published at The Waschington Post. By Henry E. Hale, Volodymyr Kulyk, Olga Onuch and Gwendolyn Sasse.

In the covid-19 fight, at what point do people think the cure is worse than the disease?

Our new survey evidence from Ukraine shows that for countries in conflict, economic fears aren’t the only issue. National security threats may pose significant barriers to slowing down the virus.

How we did our research

All countries face short-term trade-offs between fighting the virus and keeping the economy going. We wanted to uncover people’s priorities in a country that also faced an immediate security threat, as do many of the world’s countries.

Ukraine fits this bill. Not only are economic choices hard there — we document that 58 percent of all citizens found it difficult to afford clothing as of April 2020 — but Ukraine’s ongoing war with Russia-backed insurgents in the Donbas has claimed over 14,000 lives since 2014.

To learn how Ukrainians prioritize these concerns against battling the pandemic, we partnered with the Kyiv International Institute of Sociology (KIIS) as part of our international and multi-university project on Identity and Borders in Flux: The Case of Ukraine. KIIS included a series of our questions in their April 22-24 telephone “omnibus” tracking survey of a nationally representative sample of 2,024 adult residents of Ukraine.

We first confirm the pandemic indeed strikes fear among Ukrainians. Our results indicate most people in the country (57 percent) are “very” or “somewhat” afraid of contracting the new coronavirus. But a substantial 17 percent are “not too afraid” and 23 percent “completely unafraid.”

At the same time, we find large majorities believe the government’s efforts to fight the virus should be tempered by economic and security concerns.

In fact, only 31 percent of the population would combat the virus regardless of economic cost. That said, just 19 percent would prioritize the economy over fighting covid-19.

More Ukrainians (26 percent) would prioritize security and territorial integrity over anti-pandemic measures, with only 20 percent believing security and territorial concerns should not limit the battle with the coronavirus at all. Potential limitations are about not just budget, but also the focus of government attention, where and how medical personnel are mobilized, and military activity that compromises social distancing.

Who puts economy and security over public health?

When we look at who takes these different positions, we find a striking divergence between people who are subjectively and objectively at risk.

People who are subjectively at risk — those who personally fear infection for any reason, valid or not — tend more often to give free rein to the coronavirus fight. But people who are objectively more at risk than others, including urban and older populations who are more vulnerable, are on average more likely to prioritize the economy and security over fighting the virus.

From the perspective of limiting the pandemic’s spread, this finding is particularly worrisome as it relates to the economy. It suggests people who are actually most likely to die of the virus (older people, in particular) are more likely to take risks, for example by engaging in economic activity that brings them into close contact with other people.

Interestingly, poor people (those finding it difficult to buy clothing) are not much more likely on average than anyone else to favor saving the economy over fighting the covid-19 virus. This group does, however, tend to oppose giving security top priority. For Ukraine’s poorer citizens, it seems, the virus and the economy both are on average more immediate concerns than national security.

People who would place national security and territorial integrity over public health are often also those who reject compromise with Russia as a path to settling the conflict in the Donbas. They are also, on average, slightly less likely to be potential voters for President Volodymyr Zelensky.

This makes sense. Zelensky campaigned on a pragmatic desire to bring peace to the region — prompting many of his opponents to worry this would involve giving up too much to Russia — and has strongly championed anti-virus measures. His voters are also more likely to prioritize battling the virus over rebooting the economy.

What about ethnic and regional divides?

While patriotic fervor directed at an enemy apparently does lead many to accept fiscal and other constraints on battling a pandemic, we find little evidence this fervor is rooted in ethnic divides. Some analysts see Ukraine as an ethnically divided country, though our prior research suggests this reputation is frequently exaggerated.

In fact, positions on the health-security trade-off are remarkably consistent across Ukraine’s main ethno-linguistic and linguistic groups. They also don’t vary much by the level of pride respondents noted in being a Ukrainian citizen.

That said, people in Ukraine’s western regions display a somewhat higher than average pro-security positioning (independently of Ukrainian language use or ethnolinguistic identity as “Ukrainian”). And Donbas residents — who have borne the brunt of economic costs associated with the war — display, on average, a greater willingness to limit the anti-coronavirus struggle for economic reasons.

War can have a far broader effect

It’s no secret that war, including the one playing out with Russia in Ukraine, can negatively impact public health far beyond the battlefield. Our survey results reveal war can also make it politically difficult for countries to do all they can to combat a pandemic.

Moreover, in a country like Ukraine where a sizable minority of hawks do not trust the current president, some of these people may disregard or even rebel against the leadership’s anti-pandemic measures if they start to fear the virus issue is being used to force a compromise peace solution they view as worse than the disease.

The possibility just described creates incentives for aggressors like Russia not to ease up. By prolonging security threats faced by their adversaries, they can weaken their opponent’s anti-virus resolve, causing off-the-battlefield casualties and stirring up political turmoil.

Countries in conflict can thus wind up facing difficult choices not only involving the economic costs of self-isolation, but trade-offs between what makes them feel secure as a nation and what makes them healthy.

Volodymyr Kulyk is head research fellow at the Institute of Political and Ethnic Studies, National Academy of Sciences of Ukraine, in Kyiv.

Olga Onuch is Senior Lecturer in Politics at the University of Manchester.

Gwendolyn Sasse is Director of the Centre for East European and International Studies (ZOiS) in Berlin and Professor in Comparative Politics at the University of Oxford.