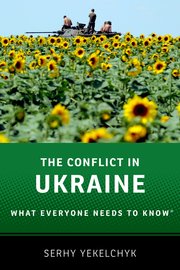 When guns began firing again in Europe, why was it Ukraine that became the battlefield? Conventional wisdom dictates that Ukraine’s current crisis can be traced to the linguistic differences and divided political loyalties that have long fractured the country. However this theory only obscures the true significance of Ukraine’s recent civic revolution and the conflict’s crucial international dimension. The 2013-14 Ukrainian revolution presented authoritarian powers in Russia with both a democratic and a geopolitical challenge. President Vladimir Putin reacted aggressively by annexing the Crimea and sponsoring the war in eastern Ukraine; and Russia’s actions subsequently prompted Western sanctions and growing international tensions reminiscent of the Cold War. Though the media portrays the situation as an ethnic conflict, an internal Ukrainian affair, it is in reality reflective of a global discord, stemming from differing views on state power, civil society, and democracy.

The Conflict in Ukraine: What Everyone Needs to Know explores Ukraine’s contemporary conflict and complicated history of ethnic identity, and it does do so by weaving questions of the country’s fraught relations with its former imperial master, Russia, throughout the narrative. In denying Ukraine’s existence as a separate nation, Putin has adopted a stance similar to that of the last Russian tsars, who banned the Ukrainian language in print and on stage. Ukraine emerged as a nation-state as a result of the imperial collapse in 1917, but it was subsequently absorbed into the USSR. When the former Soviet republics became independent states in 1991, the Ukrainian authorities sought to assert their country’s national distinctiveness, but they failed to reform the economy or eradicate corruption. As Serhy Yekelchyk explains, for the last 150 years recognition of Ukraine as a separate nation has been a litmus test of Russian democracy, and the Russian threat to Ukraine will remain in place for as long as the Putinist regime is in power. In this concise and penetrating book, Yekelchyk describes the current crisis in Ukraine, the country’s ethnic composition, and the Ukrainian national identity. He takes readers through the history of Ukraine’s emergence as a sovereign nation, the after-effects of communism, the Orange Revolution, the EuroMaidan, the annexation of the Crimean Peninsula, the war in the Donbas, and the West’s attempts at peace making. The Conflict in Ukraine is essential reading for anyone who wants to understand the forces that have shaped contemporary politics in this increasingly important part of Europe.

What Everyone Needs to Know® is a registered trademark of Oxford University Press.