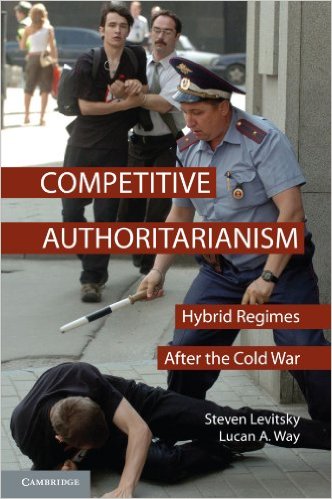 By Lucan A. Way and Steven Levitsky

Competitive authoritarian regimes – in which autocrats submit to meaningful multiparty elections but engage in serious democratic abuse – proliferated in the post-Cold War era. Based on a detailed study of 35 cases in Africa, Asia, Latin America, and post-communist Eurasia, this book explores the fate of competitive authoritarian regimes between 1990 and 2008. It finds that where social, economic, and technocratic ties to the West were extensive, as in Eastern Europe and the Americas, the external cost of abuse led incumbents to cede power rather than crack down, which led to democratization. Where ties to the West were limited, external democratizing pressure was weaker and countries rarely democratized. In these cases, regime outcomes hinged on the character of state and ruling party organizations. Where incumbents possessed developed and cohesive coercive party structures, they could thwart opposition challenges, and competitive authoritarian regimes survived; where incumbents lacked such organizational tools, regimes were unstable but rarely democratized.

‘This is a brilliant and truly pathbreaking book that should be closely studied by any serious student of democracy or comparative politics. Its precise conceptualization, striking theory, rigorous comparative methodology, and breathtaking range of case study evidence distinguish it as the most important study of political regimes and regime transitions in a generation.’ Larry Diamond, Stanford University

‘[Levitsky and Way] have made a rich contribution to [a] growing body of literature. Among the many merits of their book is [their] effort to bring greater clarity to the concept they investigate.’ Ergun Özbudun, Turkish Review