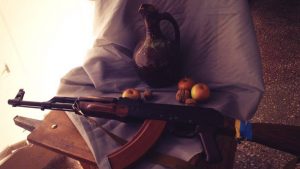 The following piece is based on a press release, where Oksana Mikheieva, Doctor of Historical Science, Head of the Department of Sociology at Ukrainian Catholic University, summarised her initial insights into the experiences and motivations of volunteer militants engaged in combat across Eastern Ukraine. Photo Credit: Vitalii Ovcharenko.

On 23rd March 2016, Oksana Mikheieva, presented the first results of “Homo Militans” research conducted in November 2015 – February 2016. The work was co-funded by the Ukrainian Peace-building School and British Embassy in Ukraine. She discussed the attitudes and self-defined motivations of pro-Russian Rebels, Military, Russian citizens, Ukrainian military officers, and volunteers that directly worked in ATO.

The research draws from an analysis of 58 in-depth interviews. These included 22  interviews with participants of Occupied Regions of Donetsk and Luhansk (ORDLO) volunteer military units, 36 interviews with members of pro-Ukrainian volunteer military units. The sample breakdown for volunteers’ social-demographic parameters included: 1) “ORDLO”: in the majority represented by young people aged 25-35, single; 2) Pro-Ukrainian volunteers in the majority are men aged 35-50, married. There is no significant difference in the education level of volunteers from both side of the conflict. Professional and educational careers of the rebels from Donbas are characterized as interrupted. Respondents often changed the place of their employment. Their life strategy shows us the situation which is characterized as “closed social lifts”. This situation formed their low level of grievance sympathy to the Ukrainian political system. Most of the pro-Ukrainian volunteers speak about success in education (gold or silver medals at school, honors degree at the University etc.) and steady professional career or successful self-realization as a private entrepreneurs. In what follows, Oksana provides insightful junctures and parallels in attempting to ascertain the motivation for war in Eastern Ukraine.

In considering the military incidents and aftermath of the armed conflict in Eastern Ukraine, it became apparent that the attitudes of voluntary militas were overlooked in understanding the realities on the ground. As part of a larger exploration of “Homo Militans”, this summary of press release provides a contextual background on the dynamics and the politics within which such units operate.

The armed conflict in the Donbas region of Ukraine started in April 2014. According to UN body OCHA, the number of documented deaths was estimated at 9,167 in February 2016.

According to the point of view of the rebels from Donbas, the inception of the conflict in Eastern Ukraine, particularly within the occupied Regions of Donetsk and Luhansk (ORDLO) was incited by “third forces.” The underlying confrontation occurred between the US, Europe, and Russia. Amidst the triad of protagonists, Ukraine acquired a distinct position that objectified its role in the unrest. It became entangled in the wider global political changes. Pro-Ukrainian volunteers‘, firstly, describe the events as inspired by Russia. Combatant incidents were growingly presented as the initiative of Russian political constituencies that were considered to be with longstanding agendas and preparations. Secondly, the emphasis went to the role of regional oligarchs and their fight for self-governance in the form of “patrimony”. Thirdly, the various events (between April 2014 and February 2016) reflect the emergence of a specific lifestyle and mentality held by local Eastern Ukraine citizens.

As a result, the negotiation process for ending combat became complicated by the vastly disparaging interests of political representatives from different sides of the conflict. However, those engaged in combat, namely the voluntary forces, regard themselves as victims of circumstances. More poignantly, as participants in the conflict, they project a limited consciousness with their possible role as mediators, exhibiting an inability to negotiate and overt further conflict. 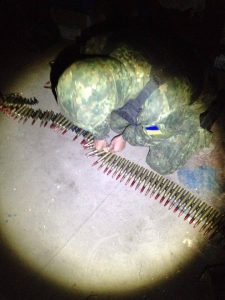 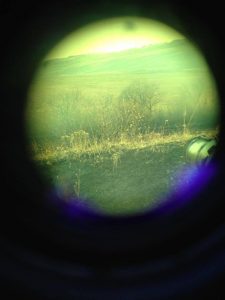 With the intensification of armed combat among participants emerged the view that the conflict has entered into a long-term phase of 2 – 5 years active war. Beyond the immediate phase participants estimate and predict a 10 to 25 year struggle with a stagnating and tense finalisation process. However, aside from the fact that mutual relegation of responsibilities, and the establishment of a negotiation process can only occur once all claims and conditions are met.

Reconciliation is seen to possibly occur with the next generation. Participants are considered to be most capable of interpreting these events as distant spectators. This stage is where disputing parties do not envision a political reunion as more beneficial than ongoing confrontation. As previously mentioned, “object” views on possible conflict resolution are separate from a willingness and ability to overcome divergent interests.

Moving to the more recent context of current events, “Slavic” and “Soviet-nostalgic” concepts are removed from Ukrainian political ideas. Instead, these concepts are composites of the Russian model for governance known as the Russian Federation that takes modern versions of the restored USSR and merges them with “Pan-Slavism” construct.

The geopolitical constructs, emerge as fictitious correlations of territories. For instance, ORDLO respondents have a wide range of areas that include: the Soviet Union, Russia and New Russia (“Novorossiya”), and Little Russia (“Malorossiya”), and “South-East” etc. Among the aforementioned, only Russia in their minds exists as a political entity with defined borders. From their subjective perception the Russian state appeals to the idea of imagined “our land.” Such nation-identity has become the main object of conflict without tangible linkages to borders. As a result, the negotiation process became more complicated by the position that territorial gain is the main solution.

According to political constituents, any adaptation to peaceful existence is problematic. This is because, through the political disputes and ground combat several fibres of society have been fractures. These include, the loss of social relations, and the emerge of social isolation among civilians. This dynamic emerged more in ORDLO. More specific to the societal impacts are the severe psychological needs that will not be met due to lack of resources with the capacity for exacerbating psychological wellbeing of citizens. There is also the issue of insufficient professionalism from volunteer psychologists that fail to provide adequate information and support to potential clients. In another sense, peaceful coexistence is further compromised by a lack of moral compensation. I refer to the tensions that emerge from different attitudes towards the volunteer military units and their activities, including former soldiers that face various reactions, often feeling unappreciated.

One of the other major insights and observations during time spent amidst the different voluntary military forces were the issues related to employment. For instance, the main concerns of employers are the psychological wellbeing of state, a possible disloyalty of employees with minority political stances. The reluctance of former military volunteers to work in the standard vertical (centralized) structures also emerged as a considerable issue. There was also the problem of this group to comply with management structures in the workplace, due to the tendency to see themselves in business. This self-perception directly impacted on business incubators, and maintaining favorable conditions for entrepreneurship). Part of ex-soldiers experienced problems with employment. This was largely because they were either marginalized, or forced to return to war (as a professional military officer). This trend is typical for all volunteers, but is more particular of ORDLO.

Contrastively, there was a high level of readiness to participate in the protests. Most of the former militaries emphasized the need to respect legitimate form of protest. However, the list of possible political activities goes beyond conventional operations.

Willingness to protest mobilization can be canalized by engaging volunteers with local activist groups, which aimed at addressing social problems and changes of local environment and possible willingness for mobilization protests. If the potential combatants won’t be taken in “peaceful course” we can expect dangerous vectors of their self-realization.

Another area of attitudinal significance is the problem of rights re-distribution and the limits of political legitimacy. Some members of the volunteer military units claimed they had already performed their role in the combats, and required support (searching for “way out”). At the other end of the attitude spectrum, other members rejected any prosecution of volunteers that were considered to have committed crimes. This sub-group of member expressed feeling monopolized, insulted and dissatisfied with the lack of remuneration for services. Inherent among Pro-Ukrainian volunteers, was the willingness to die for country or nation that was balanced out by strong levels of distrust for political elites, which were considered incompetent and corrupt.

Taking these observations in to consideration, we suggest that participation in war varied. First, Pro- Ukrainian military units assess future prospects in terms of protecting their land, and do not plan to pursue a military career after the end of the war in Ukraine. Second, ORDLO volunteers are eager to continue such activity in other “hot spots,” planning to help “brotherly nations” as an extended motivation to not become part of Ukraine. Instead, the objective is to build Novorossiya.

Investigation was carried out in November 2015 – February 2016 (field stage). The respondents were selected according to their voluntary participation in hostilities (because they are strongly motivated part of the militaries).

The sampling technique was the snowball method with not more than two steps in one chain. Local interviewers worked in each region. That gave us an opportunity to achieve a greater level of confidence for respondents. Interviewees represent almost the entire territory of Ukraine (Donetsk, Luhansk, Kirovohrad, Dobropillia, Artemivsk, Lviv, Vinnytsa, Mariupol, Mykolayiv, Kyiv, Zhytomyr, Stryi, Makiyivka, Sevastopol, several villages of Lviv and Kirovohrad region; respondents from the occupied parts of Donetsk and Luhansk region (ORDLO) are residents of Donetsk, Lugansk, Makiyivka, Gorlivka, Sevastopol, as well as a number of Russian cities, and Russian citizens). Categories of respondents: volunteer military units of occupied territories of Donetsk and Luhansk regions; local territorial defense (Ukraine / ORDLO); Ukrainian volunteer battalions; Ukrainian volunteers who serve in the regular army; Volunteers who work directly in the area of ATO (Ukraine / ORDLO); injured, disabled (Ukraine / ORDLO); military – citizens of Russia; self-defence of Dobropillia.

Logical blocks of the guide: Evaluation of the events in Crimea and Eastern Ukraine by respondents; Paramilitary motivation; The question of subordination / trust / submission; Volunteers’ evaluation their own experience adaptation to war and military environment; Volunteers’ reflection on their own choice; Volunteers’ vision of their future life in Ukraine after war (new / old sphere of their self-realization).