For the past quarter of a century, Ukraine’s post-Soviet national identity crisis has been a constant point of political contention and source of social tension. What is the best route to future national cohesion, security, and prosperity? 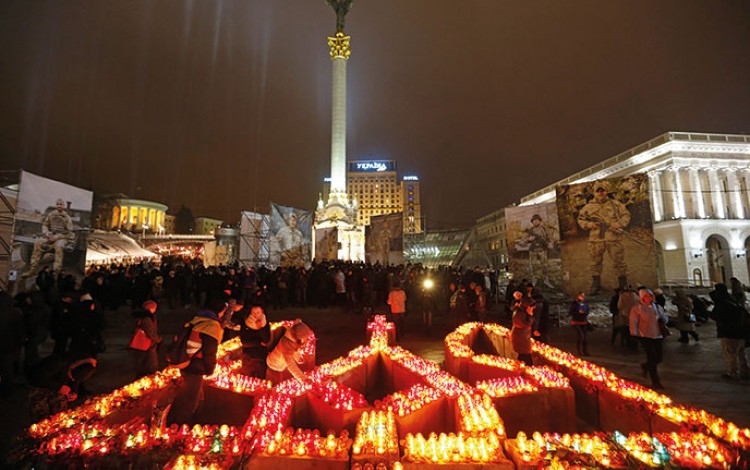 The debate was first published at Business Ukraine.

Ever since achieving independence in 1991, Ukraine has struggled to foster an inclusive sense of national identity capable of uniting the entire nation. Advocates of an ancestral Ukrainian identity rooted in traditional elements of language and culture have faced opposition from supporters of alternative visions that accommodate Soviet notions of fraternity with Moscow and membership of a wider “Russian World”.

The struggle to determine a definitive sense of post-Soviet Ukrainian national identity has repeatedly spilled over into the political arena and been played out in endless disputes over interpretations of Ukraine’s troubled and tumultuous past. Twenty-five years since the collapse of the USSR, this unresolved national identity debate is an underlying factor helping to fuel the Russian hybrid war in eastern Ukraine.

What is the best solution for the future of the country? In this month’s Business Ukraine debate, Business Ukraine magazine Chief Editor Peter Dickinson outlines the advantages of embracing Ukraine’s unsung multicultural heritage, while Ivan Lozowy argues the case for a more Ukrainian Ukraine.

ARGUMENT: Multiculturalism is the answer to Ukraine’s identity crisis 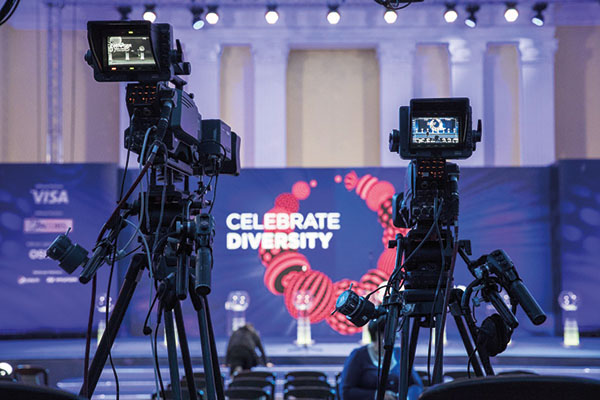 Celebrating diversity: that’s the official theme of the 2017 Eurovision Song Contest, which will take place in Kyiv this May. This is an inspired choice; Ukraine has been one of Europe’s most diverse and multicultural lands for centuries. Since the Soviet collapse, this organic multiculturalism has played a disappointingly minor role in Ukraine’s nation-building efforts. However, it is perfectly in tune with the new and inclusive sense of national identity that has flourished in Ukraine thanks to the Euromaidan Revolution and Vladimir Putin’s hybrid war.

By officially embracing the country’s demographic diversity at Eurovision, Ukraine can begin to consolidate the national identity gains of the past few years. With a global audience numbering in the hundreds of millions, the song contest is the perfect platform for redefining what it means to be a modern Ukrainian.

Ukraine’s historic diversity may come as a surprise to anyone without firsthand experience of the country. After all, the Kremlin has spent the past three years working hard to present outside audiences with a vision of Ukraine as a hotbed of nationalistic intolerance. This xenophobia narrative has proven surprisingly persuasive, particularly among outside observers unaware of the colonial context underpinning Ukraine’s long road to statehood and subsequent post-Maidan national awakening.

For hundreds of years prior to 1991, the territory of today’s Ukraine lay divided among rival neighboring powers that ranged from Mongols and Ottomans to Poles, Habsburgs, Russian tsars and Soviet commissars. Throughout this pre-independence epoch, Ukraine was a crossroads of empires where borders ebbed and flowed and cosmopolitan interaction was the norm. It was home to thriving communities of Greeks, Tatars, Georgians, Jews, Poles, Russians, Germans, Turks, Hungarians, and Swedes, to name a few. It is no exaggeration to say that it was probably the most diverse place in Europe.

These centuries of foreign rule prevented the emergence of an all-embracing Ukrainian national identity capable of binding the country’s many communities together. Instead, most people came to understand Ukrainian identity along purely ethnic and ancestral lines. In this patchwork context, a picture emerged of an ethnically Ukrainian community within a broader mosaic of ethnic, religious, and national groups, all residing in what would eventually become independent Ukraine. Unsurprisingly, many of those who acquired Ukrainian citizenship in 1991 did not necessarily regard themselves as Ukrainians at all.

This makes the transformations of the past few years all the more noteworthy. Since 2014, Ukraine has witnessed an unprecedented outpouring of patriotic fervor of a self-consciously inclusive nature that is totally at odds with the anti-immigration nativism currently on display elsewhere in Europe and across the Atlantic in President Donald Trump’s America. Popular perceptions of Ukrainian identity have moved beyond the narrow confines of language and ethnicity to embrace members of the country’s ethnic and religious minorities.

This burgeoning sense of civic identity has been in evidence across Ukraine. Russian-speaking Ukrainians from the south and east of the country have responded to the existential challenge of Putin’s hybrid war by overwhelmingly siding with Ukraine. Muslim Crimean Tatars have become some the country’s most vocal patriots. Jewish community leaders have repeatedly debunked Kremlin attempts to portray post-Maidan Ukraine as an anti-Semitic menace, while numerous other national minorities have publicly rejected Russian efforts to stoke separatist sentiment.

The irony of this situation must be painfully evident to the Kremlin. Moscow had expected Ukraine to collapse under the weight of its internal divisions once subjected to outside attack. Russian aggression has actually had the opposite effect, uniting diverse communities in the face of a common enemy and creating an overarching sense of identity that might otherwise have taken decades to emerge.

An increased emphasis on Ukraine’s historic diversity is also the perfect antidote to the kind of toxic ethno-nationalism championed by many on the country’s nationalist fringe. Ukrainian election results since 2014 reflect the low levels of public support these nationalist groups currently enjoy; none has managed to rise beyond a few percentage points in national polls. Nevertheless, the absence of a competing multicultural narrative has long allowed nationalist actors to play a disproportionally prominent role in Ukraine’s ongoing national identity debate. Over the past three years, nationalist groups have repeatedly embarrassed Ukraine on the global stage and provided Kremlin propagandists with priceless new material. Despite claiming to be arch-patriots, they have done more to damage Ukraine’s international image than the most insidious of the country’s pro-Russian politicians. It is time for the moderate, multicultural majority to reclaim the narrative.

The 2017 Eurovision Song Contest in Kyiv, with its apt slogan of celebrating diversity, is a timely opportunity to shift the debate. There will be hundreds of international correspondents in the Ukrainian capital for the song contest. They will all be eager to file additional coverage on Ukraine that provides insight into this relatively unexplored but important corner of Europe. Ukraine should grab this chance to portray itself as diverse rather than divided.

Ukraine’s national identity discussion needs to continue long after the Eurovision bandwagon has left Kyiv. Celebrating the nation’s diversity will help consolidate a civic sense of identity that Ukrainians of all backgrounds can embrace. This process is already well underway at the grassroots level, where it has played a key role in upsetting  Russia’s imperial ambitions. It might also be the best way of immunizing the country against future Kremlin attempts to exploit minority groups and turn Ukrainians against one another.

About the author: Business Ukraine magazine Chief Editor Peter Dickinson is a Kyiv-based British journalist who has been covering Ukrainian affairs for more than 15 years.

COUNTER ARGUMENT: Towards a Ukrainian Ukraine 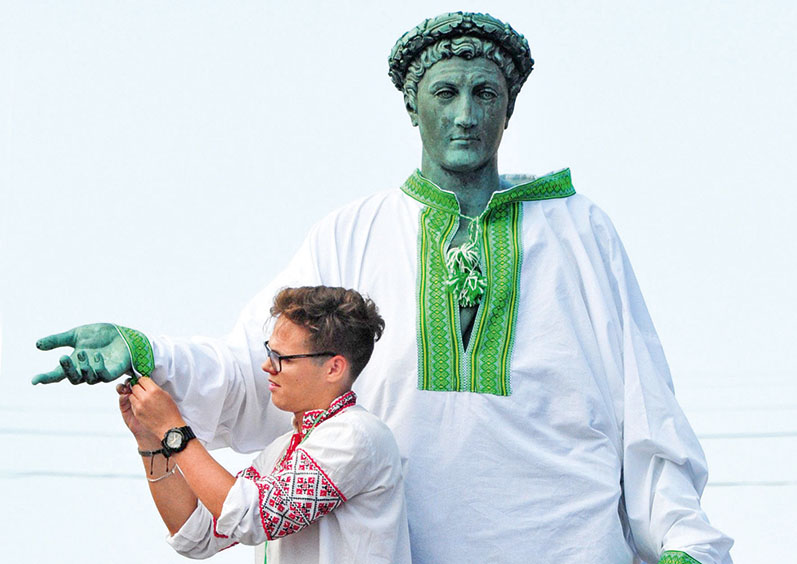 The answer to Ukraine’s identity crisis is not the dilution of Ukrainian identity via artificial or enforced multiculturalism, but its revival and rebirth.

Ukraine is neither very culturally nor ethnically diverse. Its 78% ethnic Ukrainian population puts it on a par with countries such as Lithuania, Turkey, and Israel – hardly hotbeds of ethnic diversity. Subtracting the Russian minority in Ukraine, which was artificially buttressed during the hundreds of years during which Russia occupied Ukraine (large numbers of Russians were shipped into Ukraine after the artificial Holodomor famine wiped out entire Ukrainian villages in the 1930s, for example) would, of course, yield a far more monolithic cultural and ethnic map.

Richness and diversity in the world depend on nation states that serve as fertile grounds for the organic development of local languages, customs, and culture. Artificial efforts or accidental processes consisting of large immigration influxes have often yielded bad results. Examples include the riots among immigrant communities in France. Violent race clashes have periodically taken place in Great Britain and other EU countries. This should hardly be unexpected. People naturally form local communities, often over the course of centuries, building a common culture and identity. Disrupting this communal zeitgeist leads to conflict.

Diversifying local populations creates potentially negative consequences. The United States, a country of immigrants, is an excellent case in point of the dynamics involved. Although practically every American is an immigrant, sufficient time has elapsed for an American identity to take shape. As a result, the continued and intense policy of US immigration, particularly as per the consequences of NAFTA, has riled many Americans. Their dissatisfaction helped to form the basis for presidential candidate Donald Trump’s 2016 electoral success.

Some people tend to go overboard in practically any situation. The same holds true for advocates of monoculturalism. The rise of neo-Nazis in Europe is a negative tendency that is on the rise in recent times. But these are almost always fringe groups and they do not present a real danger to societies in general. As for anti-immigrant populism in Europe, which at times lends harbor to racists, this phenomenon is a natural response to aggressive and expansive immigration policies.

This is not to say that Ukraine should shut itself off from immigration completely in the manner of countries like Japan. A constant inflow and outflow of citizens is not only natural – it is desirable. Yet for a country such as Ukraine, deprived of its own state for hundreds of years, the starting point should be a revival of the Ukrainian language, culture, and historical awareness. This is precisely what is happening today.

The omnipresent salutes of “Glory to Ukraine,” hugely popular since the 2014 Euromaidan Revolution, are encouraging signs that, as Ukrainians, we are well on our way to recovering our identity. The Ukrainian language, still overshadowed in many areas by Russian, is undergoing a revival, particularly since the war with Russia in eastern Ukraine. The dream of many Ukrainians is a “Ukrainian Ukraine” where Ukrainians, in the first instance, feel comfortable. The only thing that many Ukrainians want is what any country with an indigenous population wants – namely the opportunity to develop ourselves as distinctly Ukrainian. This is essential because Ukraine is the only place in the world where the Ukrainian language and culture can thrive.

As Ukrainians, we want the same opportunities and cultural context enjoyed by practically every nation in the world. The French envelope themselves in their own sense of Frenchness and are even very interested in exporting it. No one questions the primacy of the German language in Germany. Every nation has the right to its own place under the sun. This is not, sadly, the case in today’s Ukraine. For example, a look at any typical magazine stand across most of the country shows that at least 90% of publications are still in the Russian language.

Over the past 25 years of independence, the push for a Ukrainian rebirth has come almost exclusively from the bottom up. Unfortunately, the state has largely ignored this important aspect of rebuilding society. The consequences have been disastrous. In Crimea, a staunchly pro-Russian ethnic minority was able to aid the Kremlin in the easy, albeit illegal, annexation of the peninsula. On the other hand, across most of Ukraine, Ukrainians are now more interested than ever in their heritage. There are many popular Ukrainian pop artists. The Ukrainian national costume, the vyshyvanky, is now a regular feature on city streets. Ukraine’s parliament has passed a law requiring old, communist-era nomenclature to be replaced. The replacements are often the names of historical Ukrainian heroes. This is all good. Because only after fully recovering our own identity can Ukrainians be responsible for developing our country as a modern, tolerant and developed society. Slava Ukrayini!

About the author: Ivan Lozowy is a writer, policy analyst and civic activist. Born in the US, he came to live permanently in Ukraine in early 1991 and adopted Ukrainian citizenship in 1997.