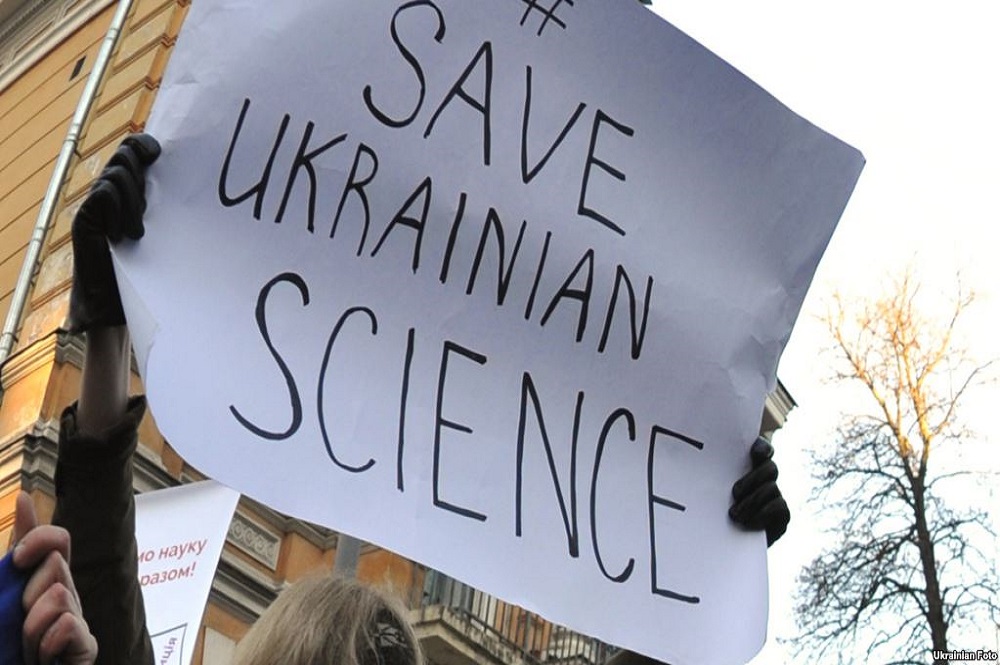 The interview was conducted by UDI Content Manager Alina Nychyk and originally published at Hold the Trend.

An interview with a Ukrainian professor and member of Ukrainian National Academy of Science, who did not want to reveal his name due to fear of losing his job.

From my point of view, there was a stable crisis in Ukrainian science during the last 5 years. There were no positive changes, even after the Euromaidan. The number of research institutes decreases, scientific workers are being fired, the government does not finance fundamental and applied scientific research. Additionally, the level of preparation of candidate and doctoral theses is gradually declining, corruption is becoming stronger during thesis defenses, and plagiarism is widespread.

Only 10 percent of Ukrainian scientists are under 35 years old. In most institutes, around 30 percent of scientific workers are pensioners, with an average age of 71 years. The vast majority of them do not contribute positively to science; they just occupy positions which could be taken by people with more youthful perspectives. Also, older scientists are paid by the government from state funds, which could be used for the development of science.

Funding for science is reduced each year. At the same time, funds are not distributed according to scientific subjects, but according to the number of employees in institutes, which is not conducive to the full and objective study of the scientific problems. Unlike in other countries, the Ukrainian government also creates obstacles for scientists applying for international grants or foreign investment. There is nothing that encourages young scientists to conduct their researches in Ukraine, therefore the government supports ‘aging of Ukrainian science’.

It is overwhelming. To get any scientific title you need to pay a bribe. Due to this, it is extremely difficult for quality scientists to get the titles they deserve, but very easy for people with money, but without any knowledge, to buy them. There are many members of Ukrainian National Academy of Science who should not be in the positions they currently hold. Let us consider the example of any huge human or animal disease in the country. Officials are earning money on people’s grief by buying expensive medicine of bad quality with state money.

Due to foreign investment, the material and technical foundations of institutions increase. However, without state support for investment, institutions, and the financing of research workers’ salaries, research is being conducted only formally. Consequently, there is no objectivity and innovation. The government is not interested in supporting even a technique bought with foreign funds, as it cannot make money on this.

Presently, the USA is the most significant investor in Ukrainian science, while the European Union – which has experienced Ukrainian corruption – does not trust Ukrainian officials, and is no longer interested in such investment.

The international community could help to introduce system reforms of the main Ukrainian National Academy of Science and its branches, and, in particular, the system of financing of science and defense of scientific works. Academics should be replaced by good modern managers with organizational skills, while the same academics can be involved as consultants in projects where they can really contribute. It is a common practice abroad. Foreign experience could be a chance for Ukraine to change a number of Soviet issues, such as the small ’starting salaries’ for young scientists.

There is no possibility for self-realization for a scientist in Ukraine. It is not possible to conduct comprehensive research, and it is not possible to survive with Ukrainian salary. The average salary of a scientist in Ukraine is $150. In other countries, scientists earn $800-1200. Salaries correspond to the scientist’s level abroad, and he can conduct quality research with state financing.

Some scientists are, of course, staying in Ukraine due to different reasons. However, their life is a constant fight against corruption schemes and for survival. Some could go into the private sector, and realize themselves to some extent. Working for international companies and research initiatives in Ukraine is another alternative, as long as their projects have minor connections with Ukrainian government.

The situation in science in Ukraine could not change for better until the scientific system, specifically the leadership of big and branch academies, is reformed. However, if the situation does not get better in the next 2-3 years, all the promising young researchers will emigrate, scientific institutions will close, and Ukrainian science will be thrown back for decades.

Unfortunately, the young generation mostly does not have moral principles in the situation of overall corruption. They want to get as many titles as possible, and do not think about the development of science in the country. The only chance for positive change comes when young people get study or work practice abroad, and then return to Ukraine with their knowledge and experience. Even if a young scientist goes for a traineeship abroad for only one month, after coming back to Ukraine, his perception is already different. He remembers the respect he was treated with and the conditions of work for scientists abroad.

However, I would stress that all reforms in Ukraine should be done only with foreign control, otherwise, the new generation will not be able to change anything. Another thing is that many pensioners who do not contribute into the development of science should be hired to make space for young generation.