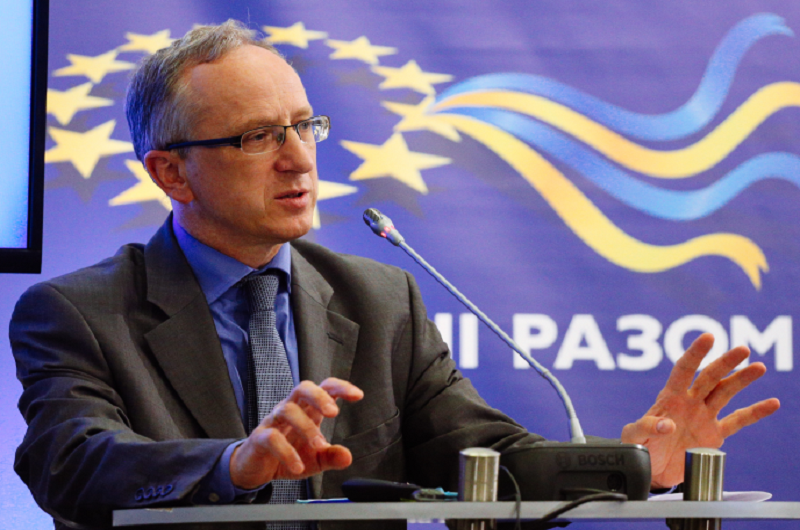 This interview has been produced by the EU Neighbours East project and was firstly published by Vox Ukraine. The Head of the European Union Delegation to Ukraine, Ambassador Jan Tombiński, highlights Ukraine’s huge potential, as it takes responsibility for its own future.

Which are the values that Europe is promoting in Ukraine, which are shared in this country?

The main basis of our values is to put every individual person in focus, at the centre of attention. This has a specific bearing in the regions of Europe with a post-Soviet heritage, where the ‘collective interest’ – undefined or defined by a small group of people – was predominant in the past.

When I present this European approach to my Ukrainian interlocutors, I very often quote the difference between this collective approach and the individual approach. The European policy of human rights is about defending the individual against oppression by a majority group.

Likewise, in European competition policy, for example, we focus on the business and economic activities of every individual person, by breaking monopolies and by being vigilant against the establishment of a dominant position in the market. Here too, it is about the rights of the individual in the economic process.

The same goes for the rule of law, where the individual rights of every person are in focus: it’s not just about public order and the principle of collective security. The protection of minorities is also about the interests of small groups against larger groups. The same in the European policy of protecting the consumer – the individual is at the centre of our approach.

The philosophy and the message that we are sending to Ukrainian citizens is that we put the citizen at the centre of attention. And over the past three years, Ukrainians too have shown this desire: ‘We are the citizens, we wish to be subjects of a political process, and not only an object of political engineering by groups of people who seek to dominate us. We wish to break monopolies, we wish to get rid of the mentality of corruption.’ Corruption is also an element of dominance, reducing the person to the status of an object that you can buy for money.

Do you see any difference between the values here in Ukraine and those we have in Europe?

I do not see many differences. As human beings we have the same wish and the same approach to life. We wish to live our life using our potential, and to leave the world a bit better for our children than we inherited it from our parents. And I see the same desire among my Ukrainian friends and partners.

Why is the partnership between Europe and Ukraine important for Europe?

This is important for Europe because Ukraine is a part of Europe. Unless the European Union reaches out to this part of Europe, Europe will not understand its own history, because this part of Europe is also a part of European history. In Western Europe, there is a big gap in the understanding of what happened in the Eastern part of Europe. It even reflects now in our political approach to Ukraine. Often, people do not realise that Ukraine is something different from Russia, that Ukraine has an identity, that there is much more diversity than people expect in this region of Europe. If we talk about the confessional landscape of Ukraine, people discover how many churches there are here, and that there is an Islamic heritage in Ukraine that dates from 12th-13th century, not something imported later on with immigrants.

Europe needs Ukraine also in order to reconcile with its own past, but also to understand its own destiny and values better.

What can Ukraine contribute to Europe?

We have seen in the Revolution of dignity a call for European values. It is rare in the European Union to see people go out into the streets to demonstrate support for European values, for the rule of law, for human rights, for freedom – the basic values of democracy. And Ukrainians stood up for this and they paid a very high price for it; and they are paying a high price for this Ukrainian choice even now. We tend to forget that there were pro-European demonstrations in Simferopol, in Kerch in Crimea, as there were in Donetsk in 2013, when people protested against the decision of the previous government and President not to sign the Association Agreement with the European Union at the Vilnius Summit in November 2013. People saw this European project as a tool to modernise the country, a remedy for the shortcomings and weaknesses accumulated over the past 25 years.

We can learn from our neighbours how much we owe to the European project: in Europe people have a very short memory, so looking at this helps us to reflect about what the European Union gives us, and what European integration has brought us over past decades.

What impact does the EU have here in Ukraine?

We have seen over the past two and a half years public protests against regimes that wanted to manipulate the State for their own advantage. These people deserve the chance to have a sustainable State, a State they feel they can associate their future with.

The European project is at the centre of all that happened in Ukraine over the past three years. People sometimes tend to forget that it did not start with the Maidan, with the Revolution of Dignity. The Association Agreement was negotiated with the EU back in 2007, on Ukraine’s request, independent of the colour of the coalition or of the political coalitions in the Ukrainian parliament. It was and is a consistent thread in Ukrainian policy, not something that suddenly burst out at the Maidan. It was something that very much reflected the deep understanding of where the future of Ukraine lies, which has given Ukraine the incentive to modernise the economic, social and political structure of the country.

What is the focus of the EU in Ukraine, is it education, is it reforms, is it infrastructure, or something else?

It is much more than that. It is about systemic transformation of the State, to help to build up a sustainable structure for Ukrainian democracy. We will be best served if Ukraine is a stand-alone, sustainable, reliable partner of the European Union. It is not, as sometimes presented by Russia, a case of ‘either-or’, it was never so. We in the EU wanted to have a sustainable partner in Ukraine, with the understanding that we will all be well served in the long term if Ukraine is a country that is able to take its own responsibility for its own future.

Ukraine’s potential gives it the possibility to be an important contributor to international efforts to fight against most of the problems facing the world, to fight against famine, to fight against poverty, provided Ukraine’s economic and social potential is well used in the interests of the Ukrainian people. This is the core message that we have to convey to Europe, as well as in Ukraine and elsewhere.