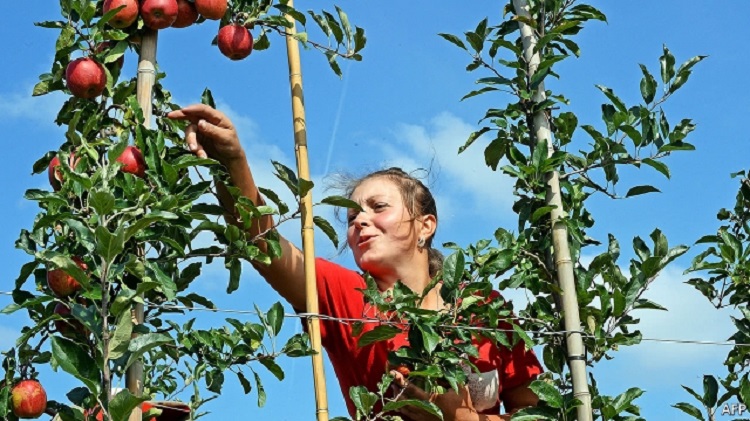 The article was originally published at the Economist.

POLAND’S most visible labour market begins shortly after dawn. About 30 women and a similar number of men wait in separate groups beside a road half an hour’s drive south of Warsaw. The eager stand at the kerb, craning their necks to search for cars. The more resigned slump in the shade of a tree or pace about, smoking. When a Volvo pulls up they dash towards it, awaiting offers of work. The youngest is 20, the oldest a gap-toothed 53-year-old. All of them are Ukrainian.

The number of Ukrainians in Poland has soared since fighting began in eastern Ukraine in 2014. There is no definitive figure, but around 1m are estimated to be working in Poland at any given time. Most did not flee the war but its economic consequences: a recession that lasted two years, unemployment and a plunging currency.

They can earn five times more than at home, picking tomatoes, mixing cement or driving for Uber, the ride-hailing firm. Companies can register them to work for six months at a time, but some, like those at the roadside, work illegally. Ivan, 28, knocks back an energy drink as he waits to choose his next boss. “No sleep!” he explains. “Work, work, work.”

Employers are chipper. A tumbling birth rate and the emigration of 2m Poles to other European Union countries has shrunk the labour supply. Unemployment is at its lowest since 1991 and the economy is surging. The Union of Entrepreneurs and Employers (ZPP) says 5m more workers are needed to sustain growth over the next three decades. As Katarzyna Sidlo of Warsaw’s Centre for Social and Economic Research points out, Ukrainians alone will not be enough to plug the gap, but they help. One businessman says he hires Ukrainian plumbers because they cost half as much as Poles and are “very respectable”.

In 2013 there were only 527 temporary foreign workers in the central Polish town of Kalisz. Now there are nearly 10,700. Most are Ukrainian. In March a Ukrainian priest arrived to minister to the migrants in their own language, one of 15 being posted across Poland. Karolina Pawliczak, the deputy mayor, welcomes the newcomers. “Poles can pick and choose” jobs, she says. Ukrainians “are saving our labour market”.

Voters are ambivalent about the newcomers. In a survey in 2016, 63% told CBOS, a pollster, that Ukrainians are good for the economy. But a similar number said the government should restrict the flow of migrants from the east. Meanwhile, government ministers invoke the influx of Ukrainians as an excuse for defying EU demands to accept refugees from the Middle East, saying their country is already shouldering the burden of migration from a war-torn country. In fact, most of the Ukrainians are economic migrants from the country’s peaceful areas. Only a few hundred apply for refugee status in Poland each year, and in 2016 just 16 received it.

Firms now fret that the stream of cheap labour could soon dry up. Rules introduced in May allow Ukrainians to travel in the EU (but not Britain and Ireland) for 90 days without a visa. They cannot work, but Polish employers worry that will change, and that many will find black-market jobs in the meantime. In the past few weeks, plenty have visited the Polish offices of Work Service, a temporary staffing agency, asking for help getting work further west.

ZPP wants the government to induce Ukrainians to stay in Poland by granting an amnesty to those working illegally. Alternatively, jokes its president, Cezary Kazmierczak, it should cut off power two nights a week to keep Poles at home in the evening. When a curfew was imposed in the 1980s, the birth rate soared.