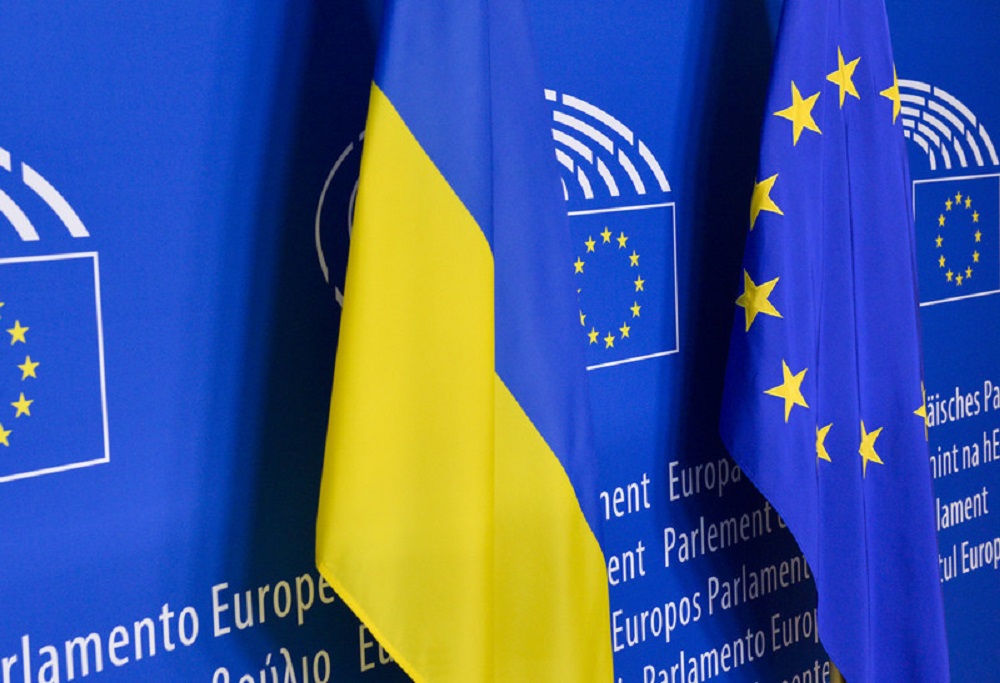 This is the speech by Ambassador Daniel Fried Distinguished Fellow, Atlantic Council “Ukraine’s Hard Road to Europe” at National Forum – Transformation of Ukraine in Kyiv, Ukraine on June 4, 2019. The speech was first published by the Atlantic Council.

The National Forum -Transformation of Ukraine has a noble goal: bringing together those who support Ukraine’s future as a democracy, secure and sovereign, with prosperity resting on the rule of law and free markets, and part of the European family.

On the Maidan in 2014, demonstrators waived the Ukrainian flag and also the EU flag, even as they were being attacked and shot at. What did this mean? As Ukrainians explained to me later, the demonstrators were expressing their commitment to their nation, Ukraine, and simultaneously to Ukraine’s future as part of an undivided Europe. This was a choice of values: for freedom against tyranny, for the rule of law against corruption, for the prosperity that comes from the application of these values, and for joining a Europe in which these values, as they saw it, have been institutionalized. These Ukrainian patriots believed in the values of Europe, and by extension the West, more than the West sometimes seems to believe in itself these days.

Vladimir Putin, of course, had another view of the Maidan. It was, he claimed, merely the “rampage of reactionary, nationalist, and anti-Semitic forces.” This reflects the Kremlin’s apparent view that Ukrainian patriotism and even the Ukrainian nation either do not exist or, if they do, take a fascist form.

This is not original to Putin: the Soviets regarded Ukrainian (and Baltic) dissidence as an expression of fascism and spent much time and effort seeking to equate them. In similar fashion, the reactionary Tsars of the 19th century also denied the existence of the Ukrainian language and nation. The Russian propaganda machine — both overt such as RT and covert such as trolls and bots employed by the Internet Research Agency funded by the Kremlin — generally maintains that Ukrainians do not really exist as a separate people; that Kyiv is a Russian city; and that Ukraine as an independent country is a mistake of history, an unfortunate bi-product, in the Kremlin view, of the tragic breakup of the USSR.

One of the best answers to Putin’s attack came in an open letter in March 2014 from a group of “Jewish citizens of Ukraine,” as they called themselves, expressing support for Ukraine and its multi-national population, against Russian aggression. Even the nationalist groups on the Maidan, their letter noted, “do not dare show anti-Semitism” because they are “well controlled by civil society and the new Ukrainian government — which is more than can be said for the Russian neo-Nazis who are encouraged by your security services.” The letter concluded that “we live in a democratic country…have a great mutual understanding with the new government, and a partnership is in the works.”

Another answer to the line of attack by Putin and his propaganda apparat came in 2016 when the Ukrainian singer Jamala, a Crimean Tartar, won the Eurovision Song Contest with her moving song about Stalin’s deportation of her people from Crimea in 1944. I was in Kyiv the day following the award and was struck by the enthusiasm with which Ukrainians of all backgrounds welcomed Jamala as a leader in a new Ukrainian culture.

My former professor and long-time mentor Zbigniew Brzezinski told me just after the Orange Revolution that Ukrainian national identity was developing in a democratic form. I think I knew what he meant.

What is a nation? Is it the political expression of an ethnic group living in a contiguous territory? Sometimes partly. Is ethnic homogeneity, a common faith, and linguistic commonality necessary to a nation? To what degree? What are the consequences of seeking to apply narrower definitions of nationhood to the reality of the world, where people generally do not live in homogenous units? These questions challenge Ukraine, Europe, and, in a different form, the United States, my country, which is a nation of immigrants but which continues to debate the definition of the American nation to this day.

I do not offer definitive answers. But let me say this:  a nation must combine the particular — its history, ethnic make-up, languages, religions, and historic narrative — with universal values which guide its actions. Those values include those of the Enlightenment, what we call democratic values. Universality without the particular risks becoming abstraction. The particular without universal values risks degenerating into the sort of chauvinism which brought misery to Europe and the world in the 20th century. We call the nation state sovereign. But in the Western tradition — dating from Medieval Christendom — sovereignty is not absolute. The sovereign is answerable to higher principles. National patriotism is at its most compelling and legitimate when it is respectful of these universal values.

What struck me about the open letter of the Ukrainian Jewish citizens, or Ukrainians’ embrace of Jamala, is that the Ukrainian society emerging over the past 15 or so years, and intensely after the Maidan, seems to have figured this out: Ukraine’s national identity in the 21st century, the identity of a free country that seeks to join with other free countries in the West, seems prepared to embrace all those who live here, offering a homeland and accepting civic loyalty, under the rule of law and democratic norms.

The title of these remarks is “Ukraine’s Hard Road to Europe.” What does this mean?

The Ukrainians on the Maidan, and the governments that have led this country afterwards, have proclaimed joining Europe as a national goal. It’s the right goal. The alternative, tried for years after 1991, of a middle road, or “bridge between East and West” produced results that you need no American to characterize.

Moving Ukraine to Europe is of course partly a question of institutions and technical work: it means taking advantage of the Ukraine-EU Association Agreement, which after all was the initial cause of the Maidan demonstrators, and deepening Ukraine’s relations with NATO.

But the Maidan demonstrators were right: flying the EU flag also means embracing and implementing those values which lie at the foundations of Europe.

Ukraine has its flaws, and Ukrainians know them far better than I do: they include corruption, disparities of wealth and opportunity. Ukraine is still at the stage of its post-Communist transformation that Poland and other countries experienced a generation ago.

But Ukraine is a free country. Despite being under attack by Russia, with part of its territory occupied by the aggressor, Ukraine just held an election where the outcome was not known in advance, in which society rendered a judgement respected by the institutions of the state and outgoing leadership. Ukraine experienced a change of leaders in a peaceful, orderly fashion. Putin’s Russia cannot say the same.

The bad news is that the West is more distracted and less confident than it was a generation ago when Poland and the Baltic states joined NATO and the EU, and Russia is more aggressive, ready to wage war to prevent Ukraine and Georgia from realizing a European future for themselves.

The good news is that we know something we did not know in the early 1990s: that post-communist and post-Soviet transformation is possible, and that free market democracies can emerge from the ruin of the Soviet system. Poland and the Baltic states showed the way in their time, and anybody who thinks that their success was easy or inevitable hasn’t looked at it.

Poland’s road is instructive: its initial leaders after 1989, 30 years ago, took the political capital from liberation and invested it in radical economic reform. It was a risky bet, but it worked. Poland’s GDP tripled in one generation. The economic results from their initial reforms generated more political capital, which the Poles then took and applied to their national goal of integration into the West. Poland’s reforms, and the results from those reforms, came first. The institutional consequences followed.

Putin’s Russia attacked Ukraine not so Vladimir Putin could hold victory parades, though I expect that he likes them, but in order to block Ukraine’s domestic transformation and its road to Europe. This remains Putin’s goal, because if Ukraine succeeds in realizing its European future, starting with reforms at home, Putinism will be wounded, perhaps fatally. President Zelensky was right when he reminded the Russian people that Ukraine shows that a better alternative is available, and available to them.

Ukraine has lost territory and is still under attack. It’s people — refugees, those under occupation, millions of people in different ways — continue to suffer from Putin’s aggression both direct and indirect. But the courage of its soldiers and resistance of Ukrainian society has given Ukraine the opportunity for strategic success: reforms at home which will open its road to Europe.

This new government, and the new Rada to come, must act fast, using their political capital now, while it is at its peak, to take the hard steps to transform the country. Breaking up the oligarchic system and opening up the economy is near the top of the list.

It’s not all on Ukraine. The West has its responsibilities. It must maintain faith with the Ukrainian people: no dirty deals with Russia over their heads, no rotten trade-offs or new Yaltas. The US and Europe should maintain sanctions and deepen them if Russia continues to refuse a settlement which restores Ukraine’s Eastern international border. NATO and the US should deepen their military cooperation with Ukraine. NATO and the EU need to keep their doors open to Ukraine, and what seems difficult now may seem otherwise later. I’m glad that the US issued an equivalent of the Wells Declaration, making clear that it will not recognize the Kremlin’s illegal annexation of Crimea. As the new government moves toward new reforms, the US and Europe, working with the IMF, will be able to help. All should work to loosen Russia’s energy leverage over Ukraine, and over Europe.

Above all, the US and Europe should take inspiration from those fighting for freedom, Ukrainians now, like Poles and Balts a generation ago. We should take heart from Ukrainians’ determination and faith in us, to recall and act on our own values and vision of an undivided Europe, with its institution extending as far in greater Europe as our common values extend.