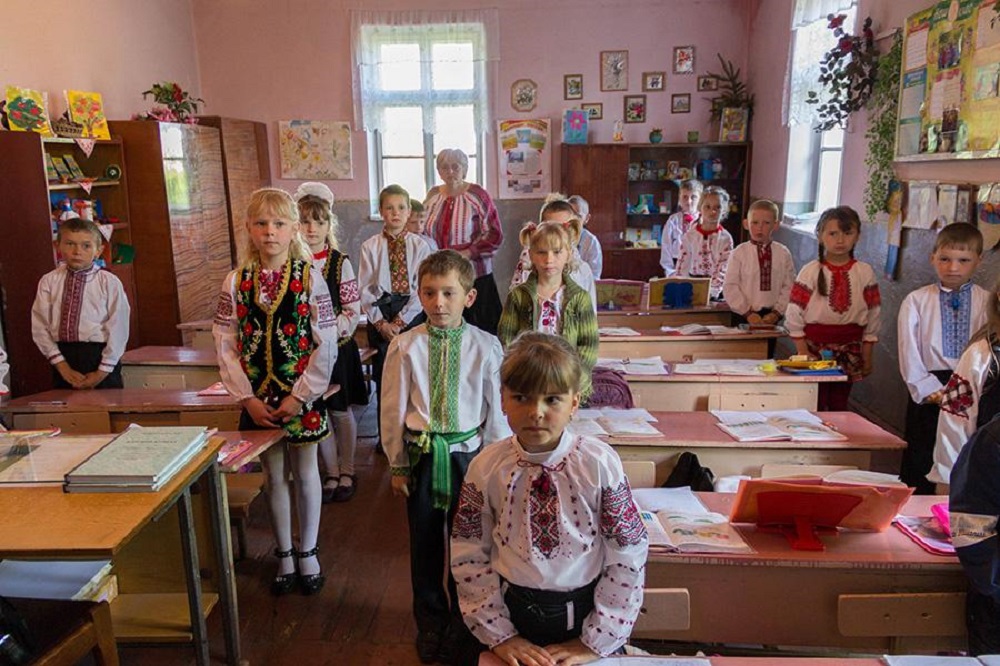 This piece was originally published here for Freedom House’s Freedom at Issue blog.

Mandating rather than simply encouraging Ukrainian-language schooling represents a swerve toward ethnic nationalism, and away from European allies.

Ukraine’s parliament, the Verkhovna Rada, passed a new Law on Education on September 5. Article 7 of the legislation mandates the use of Ukrainian as the language of instruction in all state-funded secondary schools beginning in 2020. The rule stands to affect approximately 400,000 students, or 10 percent of the student population, who are educated in Russian, Polish, Hungarian, Bulgarian, Romanian, and Slovak schools across the country.

Under the law, which President Petro Poroshenko signed on September 25, kindergartens and elementary schools will remain free to instruct children in the minority language of their choice. As students enter secondary schooling—typically at age 10—the language of instruction will shift to Ukrainian, with minority languages continuing to be taught as separate classes. If the minority language is a European Union (EU) language, as most are, additional classes will be offered in that language through high school.

While the law applies to most minority-language schools, it will not affect secondary schools instructing in a handful of recognized indigenous languages, like Crimean Tatar. Furthermore, a former justice minister confirmed that nothing in the new Law on Education prohibits the private funding of schools that teach in minority languages.

Nonetheless, Article 7 has triggered a strong response from Ukraine’s neighbors. Romania’s president, Klaus Iohannis, canceled a state visit to Kyiv in protest, while that country’s parliament unanimously adopted a statement declaring its “profound concerns and worries” over the perceived infringement of ethnic Romanians’ linguistic rights. Hungarian foreign minister Péter Szijjártó vowed to block Ukraine’s EU integration unless the law was repealed, stressing that “Ukraine will be hurt in the future” if Article 7 stands. The foreign ministers of Hungary, Bulgaria, Greece, and Romania jointly signed a letter to the Council of Europe and the Organization for Security and Co-operation in Europe (OSCE) calling for the protection of minority linguistic rights in Ukraine.

In Russia, the new law was unsurprisingly met with vitriol—despite the fact that Russia’s own education policy fails to provide Ukrainian-language schools for its population of roughly two million ethnic Ukrainians. Russia’s Foreign Ministry issued a statement on September 12 accusing Ukraine of attempting to “forcefully establish a monoethnic language regime in a multinational state.” The Russian state news agency Sputnik, in a September 26 article, quoted a Foreign Ministry spokesperson who called the law “linguistic genocide.” Moscow’s permanent representative to the OSCE, Aleksandr Lukashevich, decried the Law on Education as incompatible with Ukraine’s constitution, and argued that perceived infringements of linguistic rights had been a trigger for Russian-backed separatism in the country’s east. These claims were widely repeated by Russian news websites and internet users.

A bid for national unity

Ukraine’s position on reforming its education and language policies is understandable. This November marks four years since the beginning of the Euromaidan uprising, and after more than three years of war with Russia, the need to create and maintain a sense of national cohesion remains a priority.

Proponents of the law also argue that it reverses previous attempts at pro-Russian language reform, including Soviet-era education policies and the so-called Kivalov-Kolesnichenko language law that in 2012 sought to make Russian an official language in regions with large ethnic Russian populations.

And perhaps more importantly, it is entirely reasonable for a country’s government to expect its citizens to speak that country’s majority language. Test scores indicate that this is not currently the case. A significant number of students educated in minority-language schools do not possess adequate Ukrainian skills, with up to 75 percent of children educated in Hungarian-language high schools in the Berehove Raion failing their Ukrainian final exams. Thus, according to Education Minister Liliya Hrynevych, the new law “is in the best interest of children,” and will provide opportunities for integrating into the Ukrainian community. Deputy Education Minister Pavlo Khobzey echoed this reasoning, stating that the current level of Ukrainian-language instruction in minority schools hampered students’ education and career prospects.

The question is whether the recently adopted legislation is the best way for Ukraine to achieve its stated goals. Rather than using a “stick” approach to force ethnic minorities into the Ukrainian fold, lawmakers and supporters of the Ukrainian language could instead dangle a “carrot,” incentivizing minorities—through scholarships or community language courses, for example—to learn Ukrainian in a manner that gets results but does not hamper minorities’ cultural development or needlessly provoke resistance.

However, the new Law on Education comes at a time when the most ardent Ukrainian patriots and politicians conflate criticisms of government policy with attacks on Ukraine itself. Serious debate on government actions, legislation, or weaknesses—for example, high-level corruption, censorship of Russian-language broadcasts and social media, or increasingly invasive asset disclosure requirements for civil society organizations—is branded as anti-Ukrainian.

Risking a rift with Europe

The emotive response to critics of the education law illustrates this troubling trend in Ukrainian public discourse, and points to a dangerous deviation from one of the core principles behind Euromaidan: the Ukrainian people’s resolve to join the European community.

The drafters of Article 7 may have included virtually all minority languages in an attempt to preempt accusations that it was targeting Russian speakers in particular, but the comprehensive scope and mandatory nature of the rule is already having a marked effect on Ukraine’s relations with its European neighbors.

In addition to diplomatic spats, the new Law on Education could drag the government into lengthy legal challenges both at home and in Europe. Regional governors in Ukraine and members of the affected ethnic communities have criticized the new law, questioning its constitutionality and calling unsuccessfully for a veto by President Poroshenko. The legislation’s critics in the EU argue that it breaches Ukraine’s international legal obligations, particularly under the European Charter on Minority and Regional Rights.

These critics may be right. While the Charter lacks strong enforcement mechanisms, the European Court of Human Rights has previously ruled that a government’s failure to make continuing provisions at the secondary level for minority-language schooling amounted to a violation of the right to education enshrined in the European Convention on Human Rights, to which Ukraine is signatory.

Ukraine’s former justice minister and member of the Venice Commission, Serhiy Holovaty, has rebuked such challenges, arguing that the law is consistent with Article 10 of Ukraine’s constitution—which provides for the development of the Ukrainian language—and with European standards. Yet uncertainty over the validity of the law persists. Ukraine, of its own volition, referred Article 7 of the Law on Education to the Council of Europe for expert legal advice on September 18.

By pushing at the outer limits of European law and principles, Ukraine has inadvertently drawn closer to the rhetoric and practices of much more authoritarian states in the region. Throughout the post-Soviet space, governments are increasingly using language policy, particularly as it applies to children and educational institutions, to shore up, defend, or expand ethnic-based national identity and influence.

For example, in September, Georgia’s Russian-backed breakaway territory of South Ossetia made Russian the official language of schooling, forcing the few remaining Georgian-language schools to adopt Russian and restricting Georgian-language instruction to elective status. South Ossetia’s deputy education minister, Elisa Gagloeva, justified the changes with the same arguments employed by her Ukrainian counterparts, asserting that a Russian-language education would help ethnic Georgians in South Ossetia integrate and afford them greater opportunities for tertiary education. A similar process is advancing in Abkhazia, Georgia’s other separatist territory and also home to an ethnic Georgian minority, with the full transition to be completed by 2023.

While European critics of Ukraine’s education law have been quick to label it as a human rights issue, it also makes an easy target for Kremlin propagandists. Kyiv has credible concerns about the possibility of Russian government influence in Ukraine, particularly in cities like Kharkiv and Odesa with large Russian-speaking populations. It is also pursuing a legitimate aim in fostering the integration of potentially isolated minorities into the larger society. But making the switch to Ukrainian-language education compulsory does little to allay exaggerated fears of aggressive “Ukrainization” among Russian-speaking communities in Ukraine, the occupied territories, or Russia, not to mention European populists sympathetic to the Russian cause.

As the fourth anniversary of Euromaidan approaches, Ukraine must reassess the goals and legacy of its revolution, and decide what type of country it will become: a free, pluralistic, and democratic state, based on a respect for human rights and the European ideal, or an ethnically and linguistically homogeneous state that subdues its minorities in the name of national cohesion. The survival of Ukraine’s statehood, and the liberty and prosperity of the Ukrainian people, depend on pursuing the former.

Ukraine’s pivot toward Europe, and the liberal democratic principles to which European institutions are committed, are the best safeguard for the country’s future. A legislative reform that, by design or effect, chips away at the rights of minorities represents a move away from this path, and the emotive discourse that has developed around Ukrainian national identity risks alienating Ukraine’s EU neighbors while driving deeper wedges between ethnic minorities and the wider community. Both developments may ultimately play into Moscow’s hands.

Author: Nathan Stormont (@nathan_stormont) is a New York based occasional contributor and editor with Ukraine Democracy Initiative. He is a research associate for Nations in Transit, Freedom House’s annual survey of democracy from Central Europe to Central Asia.

Analyses and recommendations offered by the authors do not necessarily reflect those of Freedom House.