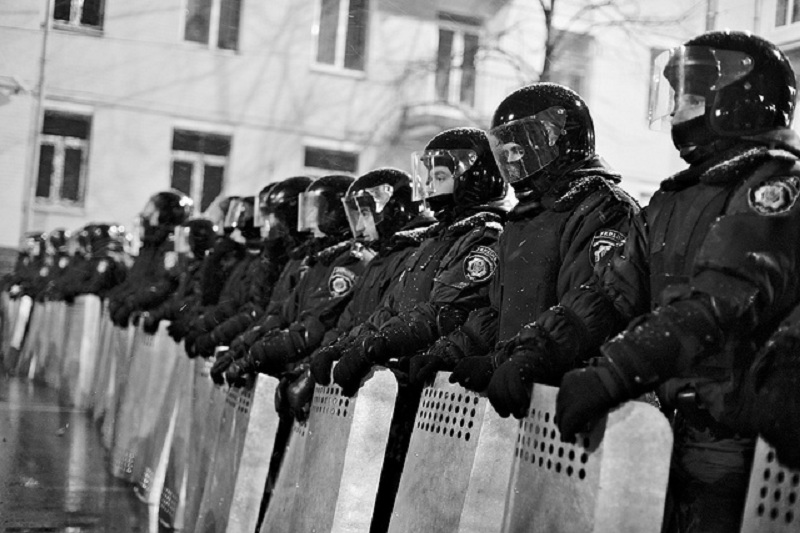 Image Source: Ivan Bandura, Flickr, Creative Commons
Riot police blocking the way to the parliament building on Sunday night
The March of Millions on Sunday the 8th of December in Kiev

The article by Mykhailo Minakov and Tymofiy Mylovanov was first published at openDemocracy.

Recent unconstitutional legislation is smoothing the way for direct rule in Ukraine — and repeating past mistakes.

21 June 2016: President Petro Poroshenko gives a press conference after a meeting with France’s President Francois Hollande. (c) Thibault Camus / AP / Press Association Images.Petro Poroshenko was elected to Ukraine’s highest office in May 2014. Today, there are indications that Ukraine’s presidential institution is winning the fight against both the parliament and the government again, while continuing to consolidate power. What makes Ukrainian presidents expend significant resources to subjugate other branches of power? Does the establishment of personalistic rule pose a threat to Ukraine?

It is easy to be pessimistic when looking at the history of independent Ukraine. In the 25 years since the collapse of the USSR, Ukraine has had 17 governments and several significant political crises, while its economy has mostly failed to grow. Moreover, Ukraine has lost part of its territory following Russian invasion and a separatist revolt in 2014, and is currently fighting a war with both.

At the same time, the history of independent Ukraine offers an inspiring story of freedom-loving and dignified citizens who have continued to struggle against kleptocratic governments. New governments and presidents replace old ones, new oligarchic groups emerge. But every time the government crosses the line, citizens storm the streets and take back power.

The recent history of Ukraine is the struggle of Ukrainians against authoritarian regimes, and this struggle is yet to produce a clear winner. Presidents and prime ministers, activists and opposition leaders follow in quick succession. Yet 25 years later, Ukraine still has no stable political parties with clear ideologies and lacks national leaders with untainted reputations.

In post-Soviet countries, the threat of authoritarianism emerges time and time again from the presidency

Alternatively, presidents subject the prime minister in the first several months (or years) after coming to power, thus strengthening their position. This is what happened when prime minister Arseniy Yatseniuk was sacked, and prime minister Volodymyr Groysman was appointed. Later, strong presidents may evolve into authoritarian leaders. Their actions cause yet another Maidan and the reshuffle of the ruling political forces after long protests.

An observer can see that the danger of a strong president is still very real today. There are signs that Ukraine’s presidential institution has once again won its struggle against the parliament and the prime minister/government and is continuing to consolidate power. Today, the president formally and informally controls key bodies of executive, legislature and judiciary through allies, new appointees and members of his financial-political group.

Throughout December 2015 and January 2016, many ministers of the previous government announced their resignations. The resignation of Aivaras Abromavicius, Ukraine’s minister of economy and trade, had a strong impact on the balance of power between president and prime minister, as he accused the president’s entourage of exerting undue pressure on him.

This political crisis lasted the whole winter and half of spring, leading to a slowdown in reforms and non-compliance with the conditions of the IMF programme and, as a result, a further delay in the delivery of the IMF tranche. (Ukraine’s financial stability is heavily dependent on western aid administered by the IMF.) On 14 April, Volodymyr Groysman, deemed by many to be more loyal to Poroshenko than former prime minister Arseniy Yatsenyuk, was appointed Ukraine’s new prime minister.

14 April 2016: Ukraine’s president Petro Poroshenko, right, and prime minister Vladimir Groysman celebrate after Groysman was appointed prime minister. (c) Efrem Lukatsky / AP / Press Association Images. All rights reserved.Groysman’s appointment was accompanied by numerous and grave violations of the law. These violations illustrate the diminishing importance of formal rules and the breakdown of the system of checks and balances. In particular, we witnessed the unusual legislative confirmation of the existence of a political agreement in the form of Resolution № 4423.

This resolution directly contradicts Ukraine’s constitution, several laws (parliamentary procedures of sacking old prime minister and cabinet, creation of new ruling coalition, and appointment of new prime minister and cabinet), as well as the logic of Ukraine’s premier-presidential model. The mutual distrust on all sides resulted in the inclusion in one document of numerous decisions that could have all been made legally through separate and quite different procedures.

For instance, new ministers and the prime minister were appointed with no formally registered coalition in place. Prior to this, the new speaker did not announce which MPs would be included in the new coalition and whether it really possessed a majority (226 votes or more). Ukraine’s parliament currently functions on ad hoc majority votes, which contradicts the constitution.

Only a formally created coalition with clear membership would have had the right to propose the names of ministers to the president (except the ministers in the presidential quota). Yet the aforementioned resolution was supported only by two parliamentary fractions (Poroshenko Block and National Front), which do not have a majority in the parliament. This is a violation of paragraph three of Article 114 of Ukraine’s constitution.

The resolution violates the right of the president to submit a nominee for the position of the prime Minister to parliament (paragraph two, Article 114 of the constitution). Another violation is the simultaneous inclusion in one document of the decision to dismiss the prime minister, appoint another prime minister and ministers from the presidential quota (Articles 114 and 115 of the constitution).

Other curious decisions include the appointment of incumbent ministers of the previous government as new ministers without first dismissing them, as well as the cancellation of the negative assessment of Arseniy Yatsenyuk’s government. (You can find the complete analysis of all the illegal aspects of Resolution №4423 in Ukrainian here.)

On 12 May, Ukraine’s parliament consented to the appointment of Yuriy Lutsenko, former head of the president’s parliamentary grouping, as the third post-Maidan Prosecutor General.

Earlier, parliament approved legislative changes that decreased the competence requirements for candidates for the post of prosecutor general, paving the way for Lutsenko. Besides, parliament illegally ignored an alternative draft law proposed by the opposition. Instead, the pro-presidential law was adopted and published immediately. New legislation was approved to suit Lutsenko’s profile, and procedures were violated to avoid proper oversight of appointment by opposition.

Finally, parliament has recently passed changes to Ukraine’s constitution and the law on the judiciary that strengthen the control the president has over judges for a transition period, which incidentally comes to an end at the time of the next presidential election in Ukraine.

We need a national debate on how to minimise the risk of authoritarian revanche and how to use this consolidated power to transform, modernise and democratise Ukraine

Changes in the above-mentioned law dissolves the “Supreme Court of Ukraine” (the only court that is able to impeach a president according to the constitution) and introduces “Supreme Court”. Following the loss of these two words, lawyers believe that the legal procedure of impeachment is no longer possible in Ukraine.

The president’s formal and informal control over Ukraine’s judicial and executive branches is rising. New anti-corruption agencies in the “presidential vertical” are yet to demonstrate consistent results in the struggle against corruption, but have already become an effective instrument of pressure against Ukraine’s financial and political elites. Local authorities, despite promises made during Euromaidan, have not become a counterweight to the almighty center. The current weakness of parliament, whose speaker is extremely loyal to the president, the not-yet-announced ruling coalition and divided opposition removes the only national legitimate counterweight to the presidency.

Unfortunately, we can see that the restoration of Ukraine’s parliamentary-presidential system, which originally took place in February 2014 after the victory of Euromaidan, is no longer valid.

Certainly, Poroshenko’s consolidation of power does not necessarily mean that this authority will be used against the public interest. At the same time, if parliament is no longer able to check Poroshenko’s power, there are no guarantees and constraints against the possible use of power for his own benefit or by interest groups.

Unfortunately, the history of independent Ukraine shows that its presidential institution has been one of the main sources of threats to the freedoms and dignity of citizens. The power of oligarchic clans of the past and current financial-political groups lies in the conditional support they lend to presidential authoritarianism.

Ukraine’s Constitutional Court is coming under increasing pressure. Read about the challenges for Ukraine’s judiciary and the perils of double speak here.

Together, the formal presidential institution and informal financial-political groups easily subject the judicial, executive and legislative branches of power, merging them into a single vertical and using them for their own benefit.

In post-Soviet countries, the threat of authoritarianism emerges time and time again from the presidency. The office of the president was invented at the end of the Soviet era to liberate the head of the state from the control of the Politburo and Central Party Committee. After the USSR collapsed, in most post-Soviet countries this office developed authoritarian characteristics in the struggle against other political institutions. Even the most democratic presidents have become champions of autocratic rule after spending two years on this Procrustean throne.

The danger of authoritarian rule is now very real in Ukraine. We need a national debate on how to minimise the risk of authoritarian revanche and how to use this consolidated power to transform, modernise and democratise Ukraine.

What’s your take on Ukraine’s current situation? Tell us what you want to hear about in the comments below, on social media and via email.

Mykhailo Minakov is Associate Professor at Kyiv-Mohyla Academy and President of the Foundation for Good Politics, Kyiv. He is also director of the Krytyka Institute, and editor-in-chief of the journal Ideology and Politics.