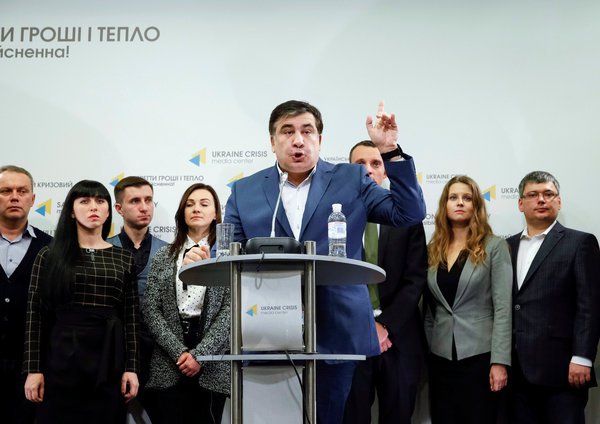 By MIKHEIL SAAKASHVILI The article was first oublished at The New York Times.

KIEV, Ukraine — Few politicians in the world have had to undergo the same experience twice in their career and in different countries. Yet this is exactly what happened to me in Ukraine and Georgia.

I was the president of Georgia for nine years, during which it went from a kleptocracy and failed state to a country that won international recognition for tackling corruption and became one of the easiest places in Europe to conduct business. Named the world’s top reformer by the World Bank in 2006, Georgia became a flagship among the countries of the former Soviet bloc.

After my second presidential term in 2013, I left to pursue academic work in the United States for a time, and then returned to Ukraine — where, as a young man, I had spent several years at Kiev University. Responding to calls from my Ukrainian friends to help apply my experience in government, I arrived along with the wave of enthusiasm for reform that followed the Maidan revolution.

I offered to work in Odessa, the largest region of Ukraine. It was highly unusual for a former president of another state to serve as a governor in a different country, but the very fate of Ukrainian statehood was at stake in Odessa. The province was not only riddled with local mafia groups infamous for their thuggishness, but it was also threatened by the conflict with Russian-backed separatists in the east. Odessa borders the breakaway region of Transnistria in Moldova, which is controlled by Moscow-backed separatists and Russian armed forces.

I brought with me a group of professionals from my previous government, who started to overhaul Ukraine’s police force and helped to lead the country’s first anti-corruption agency. The reform of the police force was an immediate popular success, while the new anti-graft agency established several high-profile investigations. We seemed to have the encouragement of Ukraine’s president to push ahead.

The city of Odessa was recovering from the clashes of May 2, 2014, with pro-Russian militants, in which scores of people were killed. Focusing on reconstruction and reform, I opened a competitive process to recruit the most talented Western-educated professionals to fill the leadership positions in district administrations. I created an economic development board to help local businessmen circumvent crooked officials in state agencies, and I invited Yulia Marushevska, a prominent young Maidan activist, to clean up Odessa’s customs service, which was notorious for bribery and kickbacks.

We began a program of repairing roads and other infrastructure. We worked hard to raise standards in public services to new levels and restore security to the region.

As the reform movement picked up pace and gained popularity, we suddenly ran into resistance where we least expected it — from people in prominent positions in government back in the capital, Kiev. The first sign of trouble was when I had to confront the then prime minister, Arseniy P. Yatsenyuk, over evidence of corruption involving government officials at a chemical plant in Odessa, one of the largest state-owned enterprises of its kind.

Starting in January, I toured the country to publicize our anti-corruption “Cleaning Up Ukraine” movement in order to put pressure on the country’s leaders to put a stop to this graft by Ukraine’s ultrarich. In March, Ukraine’s Parliament voted to remove the prosecutor general, and the following month, the prime minister resigned. Ukraine’s president, Petro O. Poroshenko, pledged to crack down on the old practices and bring in greater transparency.

That was more than seven months ago, yet we have not seen any major changes. There was no big clear-out of the cronies. I was left, instead, with the impression that local leaders of the president’s party were working to undermine the anti-corruption efforts. My administration was starved of funding for months, the appointment of several of my key deputies has been stalled, and some of our most able reformers have quit in frustration.

Ms. Marushevska, the customs agency head whom I appointed, said she was harassed with trumped-up official reprimands. Similar tactics were used by the prosecutor general’s office, which raided the office of one of my advisers. Despite these aggressive searches, no charges have been filed.

The final straw for me came when the online disclosures of Ukrainian officials’ personal wealth, the so-called e-declarations, were published last month. Here were the very public servants with whom I had to work on a daily basis shamelessly declaring the millions of dollars they had stashed under their mattresses.

It was the decades-long rule of this post-Soviet kleptocratic elite that turned this potentially wealthy nation into one of the poorest countries in Europe. Ukraine need not be poor, but corrupt officials have systematically pillaged the country, robbing Ukrainians of the prosperity that should be theirs.

While Ukraine’s soldiers are on the front line, heroically defending their country from Russian aggression, Ukraine’s elite keeps stripping the country of all it has left. In their lifestyle and mentality, Ukraine’s kleptocrats are identical to their counterparts in Russia’s oligarchy. The final freedom for Ukraine would be to free it not just from Russian aggression but also from the Russian-style political class that holds Ukraine back from its European aspirations.

Back in 2001, after failing to persuade Georgia’s president, Eduard Shevardnadze, to force through meaningful reforms and get rid of his corrupt entourage, I resigned from the government. I went on to found Georgia’s United National Movement, which led to the 2003 Rose Revolution, which finally brought real reform to Georgia. The success of Georgia’s revolution served as an inspiration to many of the Maidan activists of 2014 in Ukraine.

Just as with Mr. Shevardnadze, I’ve been severely disappointed with Mr. Poroshenko’s apparent inability to see that the status quo is unsustainable. Ukraine needs real change, not an imitation of it. Today, many of the reform initiatives we began have come to a halt. Just this week, Ms. Marushevska resigned from her post.

After my repeat experience here, I decided to resign to found a new political party in Ukraine. This is an amazing country, full of hard-working, educated and talented people who deserve a much better future. Its greatest resource is the young, educated Ukrainians who, given the opportunity, would become effective, honest public servants and political leaders, eager to rid the country of corruption.

Until now, Ukraine’s old corrupt establishment has discouraged and blocked these young reformers from assuming leadership positions in the public sector. I am pledged to help change that.