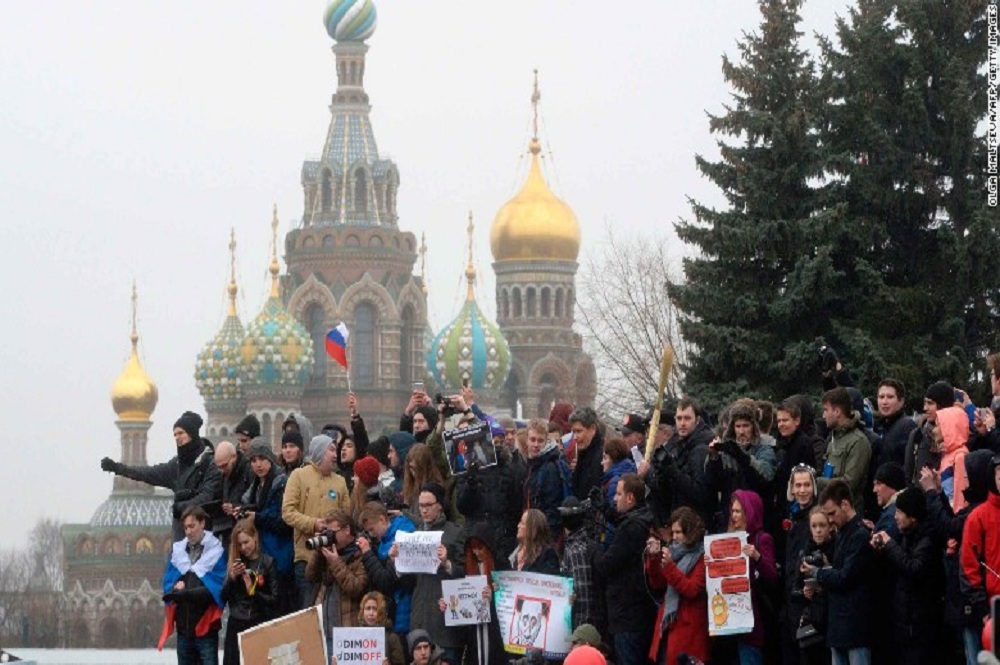 The article was originally published at the New Eastern Europe.

It has been a long time since Russia has seen such protests. However, it is not only about the numbers, since over the past three years several thousand (or even several dozen thousand) have come out to demonstrate in Moscow and St Petersburg, including in the anti-war marches in the spring and autumn of 2014 as well as in the memory of Boris Nemtsov after his assassination. This time, the fact that these protests were a coordinated action, which reached the whole country from Vladivostok to Smolensk and from Karelia to the Caucasus, is what is important. What is more, they were watched live on the internet. This is a huge success of the organisers – Alexei Navalny, Leonid Volkov and the rest of the anti-corruption foundation team and the members of Navalny’s campaign committees, which have been created over the past months ahead of next year’s presidential election. They also have created a growing challenge for the Kremlin.

In less than a month, it will be five years since Vladimir Putin became president for the third time. Since then, the authorities in Russia have made significant steps to prevent protests in the country, such as those that were seen at the end of 2011 and the first half of 2012 and which erupted after it was revealed that the results of State Duma elections were manipulated. The authorities have also made sure that any real opposition to Putin’s rule was completely marginalised. Legal actions were taken against the leaders of those protests as well as the participants of the demonstrations on Bolotnaya Square in Moscow from May 6th 2012. Laws curtailing the scope of action for non-governmental organisations were passed making it more difficult to acquire funding for the development of civil society. The freedom of speech has also been drastically constrained and the opposition is devoid of access to state media, which has launched a campaign against it.

At the same time, the criminal code was tightened and broadened to include laws which could imprison people for several years for illegally organising public gatherings. The authorities also created an Anti-Maidan movement with the aim to fight opposition in the streets, including the use of force. Moreover, the authorities set up a National Guard to fight the “internal enemy” and the Federal Security Service’s (FSB) powers were enhanced so that officers have the right to shoot with live ammunition into crowds – apparently in order to prevent terrorism. In addition, the Kremlin has tried to lower citizens’ interest in politics and convince Russians that that there is no alternative to the current governing system.

Yet, under such conditions, around 90,000 people in more than 90 cities across Russia (according to the estimates by Meduza) showed a willingness to take part in the protest action, part of which was not agreed upon with the local authorities. Hence, it became clear that suppressing civil society has failed. And increasing repression seems not to be in the interest of the Kremlin this time around. After a period of cold relations with the West, as a result of the annexation of Crimea and the war in Donbas, the Kremlin seems to be looking for ways to rebuild its relationship in efforts to ease the sanctions. Until recently, Russia had high hopes after the presidential victory of Donald Trump in the United States. However, in order to reach these goals, Putin has to improve his image and the image of Russia on the international stage. Therefore putting Navalny in prison or repeating the persecutions of the Bolotnaya Square activists would not work in his favour. For the moment, Navalny faces two weeks in prison and a 20,000 rouble fine for the Sunday protest. During this time, Putin and his advisors will undoubtedly think of ways to stop the activity of the most popular oppositional politician without shooting themselves in the foot. But for the Kremlin, finding such a solution will not be easy.

A pretext for the Sunday protests was the lack of any official reaction of the Russia’s authorities to the film titled “He is not Dimon to you” which was released by Navalny’s foundation at the beginning of March. The film presents evidence of Prime Minister Dmitry Medvedev’s enormous wealth, most probably as a result of corruption. It is not possible that such wealth – including yachts, vineyards and luxury mansions – could be obtained with a public salary, even if it is the prime minister and former president. Politicians’ wallowing in luxury outrage common Russians, who usually have rather modest income themselves (especially now in a period of high inflation and economic stagnation).

In this regard, Navalny was very strategic in his choice to highlight corruption as the main topic of his current campaign and political activity. Yet, the people who came out to protest on March 26th did so only in response to the film about Medvedev, nor because Navalny called them to protest. There are a variety of reasons why Russians might be disgruntled, be it social or political. The latter includes the ongoing war against Ukraine which has been the source of shame for many Russian democrats. During the protest action one could hear various slogans and speeches, but more interesting than what was being said, was who spoke. The absolute surprise for Russia watchers was the fact that young, even very young, people such as university students and pupils participated in large numbers. It became clear that there is a new generation rising in Russia, which is less prone to Kremlin propaganda. They generally do not watch television and cannot be convinced to support Putin based on the story about the miserable 1990s, the period before he came to power. This generation is growing up in the Putin era, but it is not his generation. If there is any name for it, this is Russia’s online generation and the internet is a difficult space for the authorities to control.

Commentators on Russia often focus on the question: “When will the fridge win over the television?” In other words, how much worse does the economic situation in Russia have to be in order for the people to protest, despite propaganda which says everything is great and any problems are temporary and have nothing to do with the Russian political system?

By focusing on this question we lose sight of the fact that there is a growing group of people in Russia on whom the TV has little or no influence. The Kremlin is trying to control the Russian internet, but so far it has done so using the wrong methods, funding “troll farms” and introducing strict fines for “improper” posts and likes. Meanwhile, Navalny and his associates have been operating in this space with ease. The materials they create – commentaries on current events, analytical pieces, short films and even long movie productions such as the abovementioned “He is not Dimon to you” – are modern, visually striking and often funny, which helps reaching the youth.

Navalny himself is among the most popular Russian-speaking Facebook users (13th place in the ranking from January 2017, 3rd if we only look at Russians and politicians – after Medvedev and Ramzan Kadyrov). Navalny’s profile on Twitter has over 1.8 million followers and his blog – from which his political career began – is updated almost daily. On top of that he has accounts on Instagram, Telegram, YouTube and on the Russian social networks VKontakte and Odnoklasniki. His online activity is in stark contrast with that of the Russian president, which is virtually non-existent. Putin does not trust the internet and does not have an account on any of the social networks.

Yet, the success of the March 26th protest is thanks to more than just Navalny’s online dominance. Navalny’s recent tour around the country, related to the opening of his regional campaign offices and the fact that his associates have been preparing the ground for him for some time (until recently Navalny could not travel around Russia due to criminal investigations against him) have played a significant role in mobilising the protesters.

To some in the West, it may seem a small achievement that 4,000 people joined a rally in Novosibirsk – a city of 1.5 million people; or that 1,000 people came out to protest in Tyumen (population 500,000) and 200 in Saransk (a city of 300,000). Yet in the conditions of Putin’s Russia, an authoritarian and oppressive country which over the past five years saw many active people fleeing, this is indeed significant.

Indeed, the scale of the civic awakening of the Russian youth, the protest potential of the provinces and the power of the internet should not be overstated and it would be unwise to get overly optimistic after one protest. And certainly the coming weeks will be difficult for the Russian opposition. A new possible wave of repressions may discourage many people from further activity like it was in the past. Nevertheless, no matter what will happen, the memory of March 26th will remain and will be a positive lesson for the future; as it should be for us, the outside observers who usually put too much attention on Putin and too little on the opposition and even less on average Russians.

Katarzyna Chimiak is a Warsaw-based historian, social activist and translator. Since 2015, she has been a member of the “For Free Russia” association, which aims to support the democratisation process in Russia and promote co-operation between civil society in Russia and Poland.