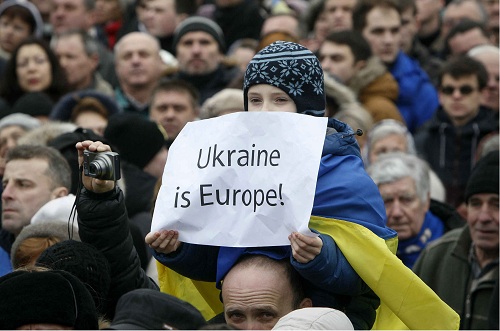 A boy wrapped in a Ukrainian flag holds a sign during a memorial rally to commemorate the people who were killed during the uprising on Maidan square the previous year, in Kyiv February 22, 2015.

The article was first publishe at Atlantic Council.

1. It’s been nearly three years since the Euromaidan protests began. How would you grade the pace and extent of Ukraine’s reforms?

Anders Åslund, Senior Fellow at the Atlantic Council: In 2014, Ukraine carried out two vital preconditions for economic reform, early presidential and parliamentary elections. Little economic reform could be done before then. In 2015, Ukraine carried out the most important economic reforms ever. They were pursued by half a dozen members of the government, the National Bank, and Naftogaz. The unification of energy prices stopped corrupt arbitrage between very different state prices. Sharp cuts in energy subsidies and excessive pensions cut public expenditures and nearly balanced the state budget. The floating exchange rate eliminated the current account deficit. The National Bank of Ukraine closed eighty banks, eliminating a major source of criminal revenue. Transparent electronic public procurement, ProZorro, was introduced. Substantial deregulation occurred. In 2016, reforms slowed down after President Petro Poroshenko ousted the Yatsenyuk government and its top reformers because they undertook reforms. The big shortfall has been the failure to reform the prosecutor general’s office and the judicial system. It is good that anticorruption bodies have been established, but it would be much better to dismiss all current prosecutors and judges and build up new, non-corrupt institutions.

John Herbst, Director of the Dinu Patriciu Eurasia Center at the Atlantic Council: Ukraine has achieved impressive reform in several essential areas. Most importantly, it has cleaned up massive corruption in the gas sector. By moving to market pricing, it has also fixed its huge budget deficit and ended its dependence on Russian gas. We have also witnessed major progress on government procurement and cleaning up the banking sector. But efforts to address corruption in the courts and prosecutor general’s office have been weak. Serious reform seems to need strong advocacy by civil society, reformers in the Rada, and in the government in league with international financial institutions and key Western governments.

Adrian Karatnycky, Senior Fellow at the Atlantic Council: The glass of reforms if not quite half full, is perhaps a third full: not enough to satisfy the thirst of a public that wants immediate change but more than enough to keep the reform process from dying of dehydration.

Public discontent with the pace of reforms is the result of two factors: rising public expectations and the pain such reforms bring to the lowest income groups. While post-Maidan governments have introduced transparent public procurements and eliminated price differentials in gas and oil, and while the massive scale of Yanukovych era high corruption has been replaced primarily by rent-seeking, much of the public mistakenly sees the ruling elite as tainted as its predecessors. One reason for this is that politically ambitious anticorruption campaigners gain advantage from painting a dire picture.

On the economic front, Poroshenko and the government have increased spending on national security from 1-2 percent to 5 percent in the face of Russian aggression while cutting the budget deficit from above 5 percent in 2013 to less than 3 percent in 2016. This has all been done at the cost of social spending.

It is no wonder that the public is unhappy with its elected leaders.

2.  Ukraine’s parliament passed an e-declaration bill that requires politicians and officials to disclose their assets online. It has been the subject of countless debates and amendments. How important is the e-declaration to Ukraine’s overall reform picture?

Åslund: Transparency is the alpha and omega in the fight against corruption. It needs to be general and appear in all areas. The Scandinavian countries took the lead in this area in the eighteenth century, and that has led to them being the least corrupt in the world. Ukraine has taken several brave initiatives in this direction, notably demanding the identity of all owners of banks or closing the banks. This should be true of all enterprises and property in Ukraine, and significant steps are being taken in that direction. The key in the fight against corruption in Ukraine is to bring transparency to the assets and income of top officials and parliamentarians as well as to their family members. The e-declaration is a highly laudable attempt to do so. The massive resistance of the old elite indicates that it is for real. There is no reason to give in to such resistance that only favors corruption.

Herbst: It would be good for Ukraine to implement this reform because it committed to do so and it would strike a major blow at corruption. At the same time, this reform is quite intrusive and even honest individuals might not want to provide the information about their assets that this reform demands. It would be a mistake to make this issue a major indicator of reform efforts in Ukraine.

Karatnycky: Ukraine’s e-declaration system is so extensive and contains so many public details that it will be counterproductive in the long term. It may make officeholders subject to the predations of criminals by revealing the extent of their assets (including watches, fur coats, jewelry and art) and will deter prosperous Ukrainians from entering politics. Ukraine has been pressed into this intrusive asset and wealth declaration regime by a zealous civil society and a wrong-headed Western reform agenda into adopting the most transparent income declarations for officials in the world.

This legislation requires many mid-level officials and legislators to make extensive revelations about their holdings, which may make them subject to theft and robbery in a country in which criminality is on the rise. Additionally, a significant portion of the public retains a post-Soviet attitude to wealth and prosperity, assuming it all to be the byproduct of corruption and harbors resentment of those better off than themselves. This opens the door to populists and those who hide their true assets to make hay about economically comfortable government officials and legislators and to play on public resentment of wealth. As a result, much of the current elite, which despite everything, has advanced the reform agenda, could be displaced by a new set of populists, who will undo fiscally responsible budgets and plunge the country into new crises.

3. What’s going on with the fight between the National Anti-Corruption Bureau of Ukraine and the Prosecutor’s Office?

Åslund: Few things in Ukraine are more easily understood than the fight between the old corrupt elite and the anticorruption bodies. This is what the struggle between the prosecutor general’s office (PGO) and the new and decent National Anticorruption Bureau of Ukraine (NABU) is about. The PGO together with other old law enforcement bodies (the courts and the old police) is fighting hard to maintain the old corrupt system, while NABU is trying to defeat Ukraine’s pervasive corruption.

Herbst: This is an unfortunate development that has raised questions about Ukraine’s commitment to the fight against corruption. Early in the Poroshenko presidency, the decision was taken to fight corruption by setting up NABU, rather than by cleaning house in the prosecutor general’s office. Critics at the time complained this was a delay in fighting corruption. Now that NABU is up and running, its efforts against corruption are hindered by an intermural fight with the PGO. The PGO’s claim to part of NABU’s portfolio raises the question of why Ukraine spent two years setting up NABU. The government needs to establish a clear demarcation of responsibilities between NABU and the PGO and push both to focus on fighting corruption.

Karatnycky: There is a turf fight between the PGO and NABU. Yuri Lutsenko, a former political prisoner of the Yanukovych era who was a leader of both the Orange Revolution and the Maidan, now leads the prosecutor’s office. Lutsenko believes that NABU does not have exclusive jurisdiction over investigating crimes by high-level officials. NABU’s leaders claim that right, although there is no legislation limiting the larger procuracy. Simply put, the PGO has a parallel right to investigate and prosecute high-level officials.

There is evidence that bureaus and networks within the PGO with links to dodgy businessmen are engaged in their own trench warfare with NABU. But it remains to be seen whether Lutsenko will tolerate this state of affairs. He has brought in former US federal prosecutor Bohdan Vitvitsky to establish an Inspector General’s office that is intended to clean up the PGO.

Lutsenko is right about one fundamental issue: the entire procuracy needs to be reformed. NABU is not large enough to fulfill all its tasks, nor is its scope large enough to attack the country’s widespread corruption. Moreover, it is important to note that NABU is primarily composed of former officials from the PGO and from the state security service, which reformers assert are riddled with corruption. NABU needs as much pressure and monitoring as the PGO.

The best way to reform the justice sector is by working to help both NABU and the PGO in their efforts to attack the scourge of corruption.

Melinda Haring is the editor of the UkraineAlert at the Atlantic Council. The interview has been shortened and edited for clarity.