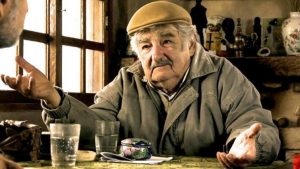 By John Keane, Professor of Politics, the University of Sydney. First published in The Conversation on 08 May 2016.

José ‘Pepe’ Mujica may not be a household name beyond the pampas and ocean shores of Uruguay, but his thoughts on power, politics and sobriety, captured in the remarkable video that follows, surely are of special relevance for politicians and citizens everywhere.

Mujica was president of his country from 2010 to 2015. Poised to celebrate (on May 20th) his eighty-first birthday, he has lived a lot of life. He was born into a poor farming family of Basque and Italian immigrants. As a young man, Mujica found himself attracted to the newly formed MLN-Tupamaros movement, an armed political group inspired by the Cuban Revolution. His time as a guerilla ended badly. Shot six times while resisting police arrest at a Montevideo bar, he managed somehow to survive. The fascist military dictatorship rewarded him with prison sentences that lasted nearly 14 years.

Mujica was released in 1985, when constitutional democracy was restored. Pardoned for his political crimes, he gradually worked his way back into public life, first as a member of the Movement of Popular Participation, then as a senator and cabinet minister. Backed by the Broad Front (Frente Amplio, FA), he was the winning candidate in the 2009 presidential elections. His campaign slogan was simple: ‘Un gobierno honrado, un país de primera’ (‘An honest government, a first-class country’). So was his political philosophy. ‘It’s a mistake to think that power comes from above’, he liked to say. ‘It comes from within the hearts of people’.

During his time as president, Mujica supported many progressive reforms, including the legalisation of abortion, same-sex marriage and marijuana. Striking was his rejection of the peacockry of presidents like Hugo Chávez (Venezuela) and Evo Morales (Bolivia). Mujica’s unpresuming character, principled modesty and imaginative politics refute the claim, championed by Ernesto Laclau and Chantal Mouffe, that radical democratic politics requires populism. Whether in office Mujica proved to be ‘the world’s “humblest” president’ is a matter of opinion. He found that kind of talk much too pompous. It was as self-contradictory as the claim that he was an ‘anti-politician’. Truth is he was a political representative with a difference: a ‘nothing’ (his word) who pushed for everything, ‘a campesino with common sense’, a politician who was sure elected office requires a mixture of bold vision, cool-headed judgement and humility.

Filmed during the final months of his presidency, the video reveals his strong dislike of showy arrogance, abusive power and humiliation. Note his disavowal of money, ‘free markets’ and the frippery of consumption. Observe his radiant generosity towards the world, his country-bred resilience, the unyielding conviction, drawn from many years of reflection when in solitary confinement, that there’s always dawn when the night ends. And be sure not to miss the one-sentence remark that he doesn’t ‘idealise humanity’. It’s his personal and political ode to a dear companion of nearly two decades, a three-legged centenarian dog named Manuela. ‘The more I know people’, he once said of the ‘most loyal member of my government’, ‘the more I love animals very much.’