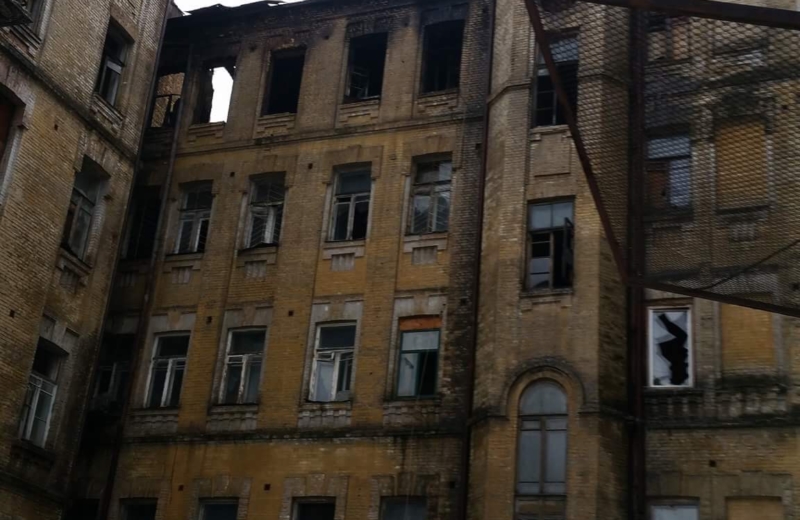 Kyiv is attractive for its unique natural landscape, unparalleled charm of architecture and invaluable cultural heritage. Despite a tough history, our city has been going through the centuries very elegantly.

However, in recent years, a real hunt has begun among developers for unique ancient buildings in the historical center of the Ukrainian capital. The main goal is to make as much money as possible by building new high-rise monsters in lieu of those magnificent former aristocratic residences.

It is a crime to destroy or even to damage objects of architectural or cultural heritage, according to Article 298 of the Criminal Code of Ukraine.

Yet building owners, with the help of corrupt officials, do not hesitate to try to ruin their old historical houses and seek to remove its “protected status” — the designation that proves that the building belongs to a register of protected historical houses.

After the building is ruined, they then try to demonstrate that the ancient house no longer has any historical value and that its restoration, which they are obliged to carry out by law, has become impossible.

Therefore, hundreds of historic Kyiv houses, bought in most cases for little or nothing, are repeatedly burned or deliberately destroyed.

The problem is not the absence or imperfection of the relevant laws – those laws exist in Ukraine to protect this “architectural patrimony.” The problem is that these laws are not respected or enforced and the guilty owners are never held responsible for their crimes. The impunity only encourages more crime.

2018, the Year of Cultural Heritage Protection in Ukraine, began with a major arson in the center of Kyiv of a protected architectural momument — the estate of the Wolf merchants, built in 1883 and located at 12-14 Bohdan Khmelnytsky St.

Two upper floors burned in the fire. Unfortunately, it is doubtful the arson will be properly investigated.

Here’s a short history of the property: In 2004, this house was first listed as being in need of restoration. After that, Geoinvest Ltd. appeared. The founder of the company is well-known in political circles, the wife of a former minister in Prime Minister Mykola Azarov’s government. The company came on the scene as an investor-savior, with the assistance of Shevchenko District State Administration.

But this investor was ready to unlawfully reconstruct a five-story historical house into a 20-story high-rise with underground parking in accordance a plan in 2005. Reconstruction of a protected historical monument is a violation of the law protecting cultural heritage.

But instead of investing millions in the building and obtaining ownership after its restoration, Geoinvest Ltd. simply decided to take ownership for free and ruin the place.

And, in May 2015, when the monument was unlawfully removed from communal property, the homeowners’ association 12-14 Bohdan Khmelnytsky got its legal standing.

With the building taken over, the illicit action began for the unlawful removal of its protected status, in parallel with addressing the Kyiv City Council with an application for seizing the land on 12-14 Bohdan Khmelnitsky St. for new construction. This also contradicts Ukrainian law, which requires restoration and not reconstruction.

I asked fellow Kyiv City Council members to request a criminal investigation into the possibility of fraud creating a fictitiouc homeowners’ assocation and the unlawful withdrawl of property from communal property.

I also appealed to the Interior Ministry, Ministry of Culture, a key Verkhovna Rada chairman, Kyiv Mayor Vitali Klitschko and other high-ranking officials. I got not action on my request.

We constantly tried to stop their illegal work by calling the police.

As a result of this pressure and multiple appeals, as well as roundtable discussions and pickets, I succeeded on Sept. 8, 2015 in filing a request for a criminal investigation into the intentional unlawful destruction of a cultural heritage object or portions of it. But no one investigated. Law enforcers were not interested in protecting this building or in protecting the lives of people in danger.
Although the building was starting to collapse, it operated public catering establishments and offices on the ground floor and in basements. The risks of the building’s collapse or arson posed a threat to the lives of occupants and visitors.

The tragedy finally prompted the city of Kyiv and Shevchenko District to take some action. But nobody was held accountable for the two deaths or the illegal construction. The case simply was never properly investigated. The scandal was silenced and those who committed the crime were never brought to account.

This set the stage for the final and complete destruction of the historical monument. Finally, on Jan. 20, this unique beautiful house was ravaged by flames that lit the sky of Kyiv’s city center.

The outcome — the loss of more of Kyiv’s rich historical and architectural heritage — the the natural result of the indifference and criminal inaction fo officials who, without exception, showed disregard for human life and granted impunity to those who committed the crime.

Until the understanding of the need to protect our architectural heritage is shared by every inhabitant of our city, Old Kyiv will keep being ravaged by fire — the fire of our own indifference.

Olena Terestchenko was born in Kyiv, got a master’s in business administration at New Brunswick University in Canada, a master’s degree in law and a master’s degree of international business management at Kyiv National University of Economics. She is a founder & coordinating board member of All-Ukrainian Union of Non-Governmental Organizations Kyivske Viche, chairperson of Terestchenko Heritage Foundation, president of UWEU Association and a deputy of of the Kyiv City Council.