Local youth build their lives and continue to thrive despite the nearby conflict. 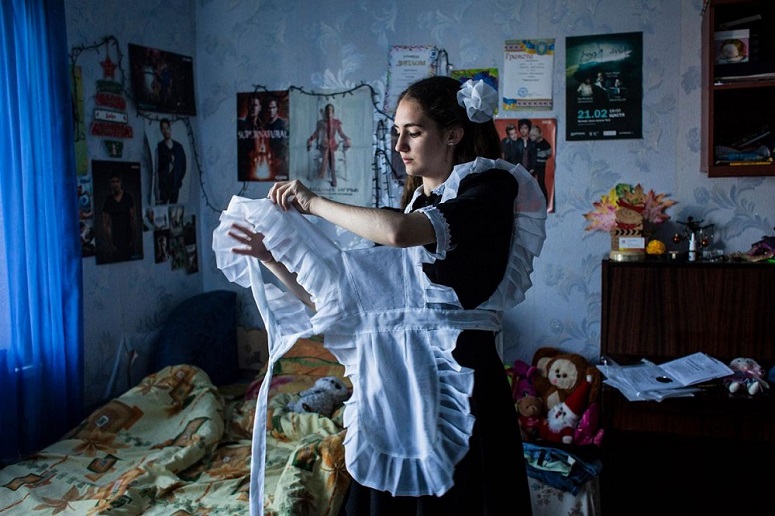 The article was originally published at National Geographic.

It’s normal for photographer Anastasia Vlasova to receive a message like this on her phone: “I’m sitting outside on the street and I hear the shelling really loud. People left the streets. It feels scary.”

The 10th grade girl who wrote the message, Diana Fomenko, lives in Shchastya, a small town in eastern Ukraine caught in the crossfire of the war between the Ukrainian government and pro-Russian rebels. In Shchastya, a town whose name translates to “happiness,” and nearby city Popasna, Vlasova is documenting youth living in the Ukrainian war zone. 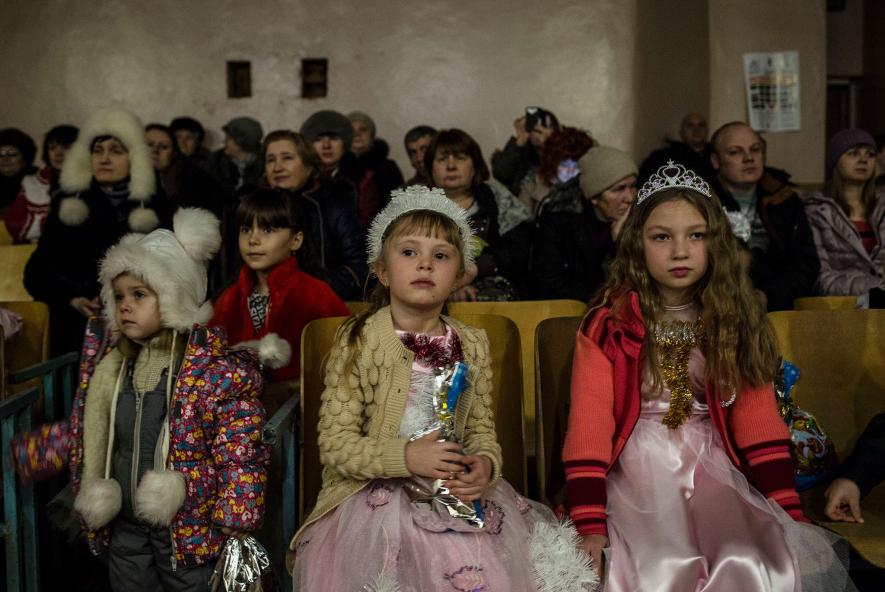 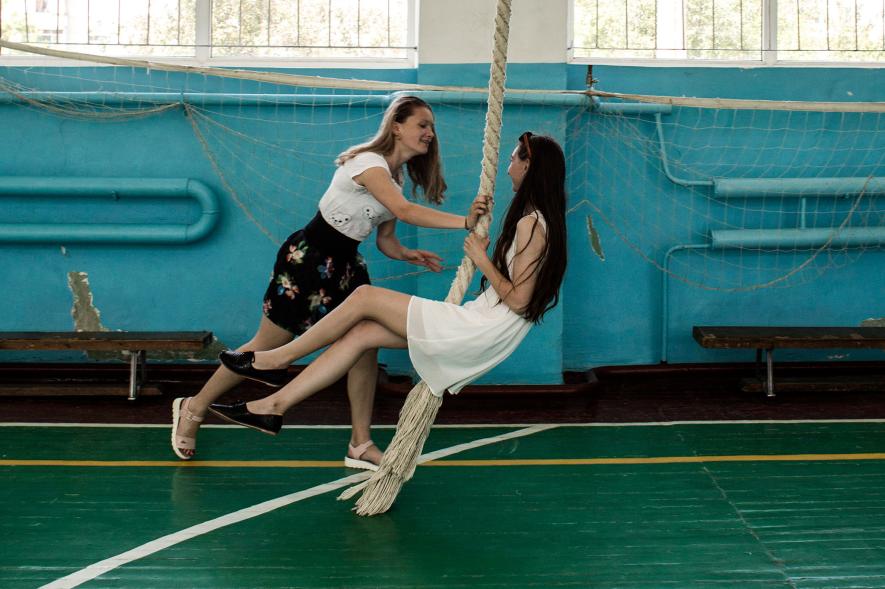 Tatiana Kolesnikova and Oleksandra Kovalyova play on a rope in a school gym in Shchastya, Luhansk area.Photograph by Anastasia Vlasova 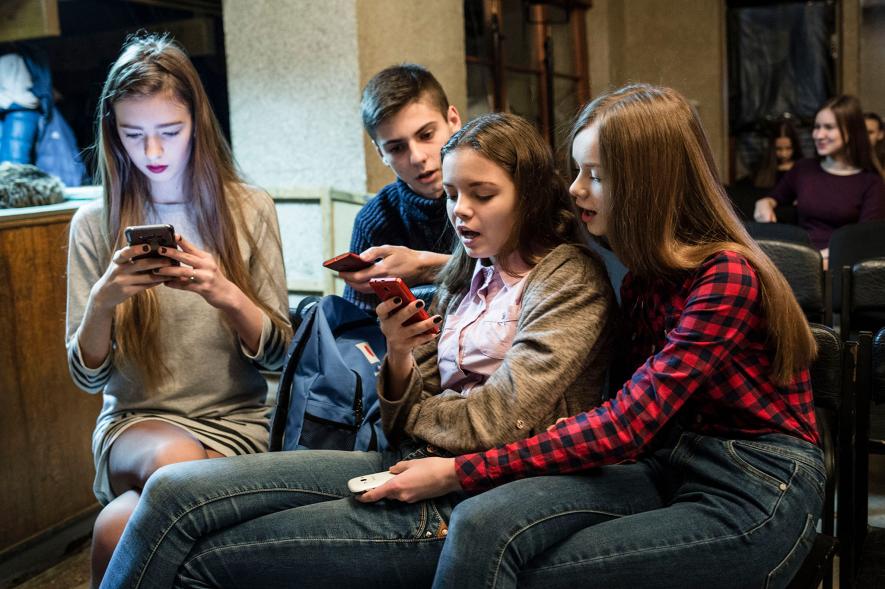 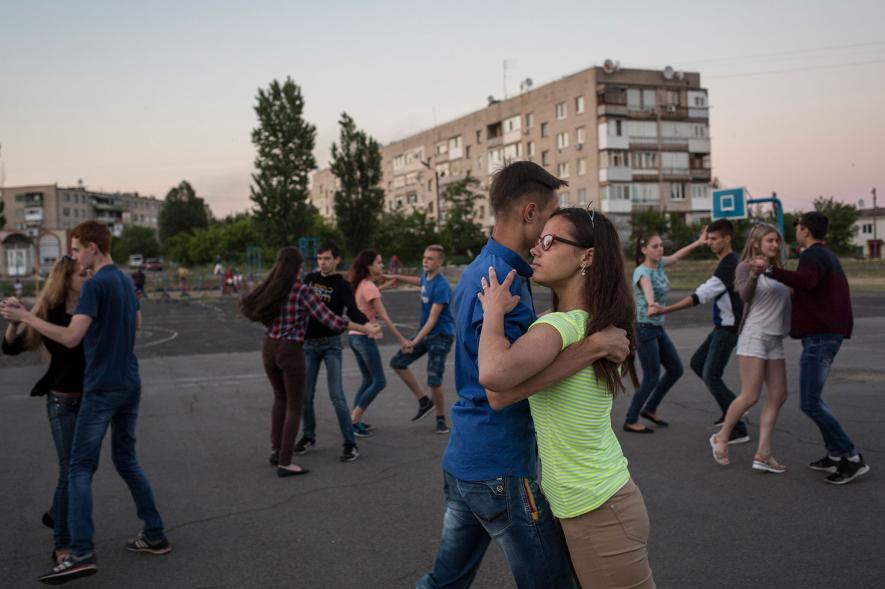 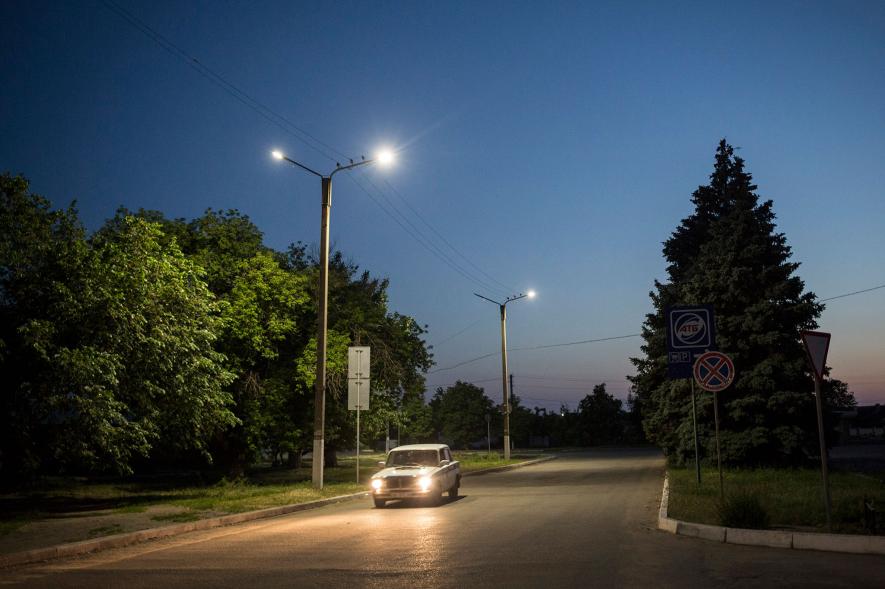 A car drives through the main street in Shchastya, Luhansk area. Photograph by Anastasia Vlasova 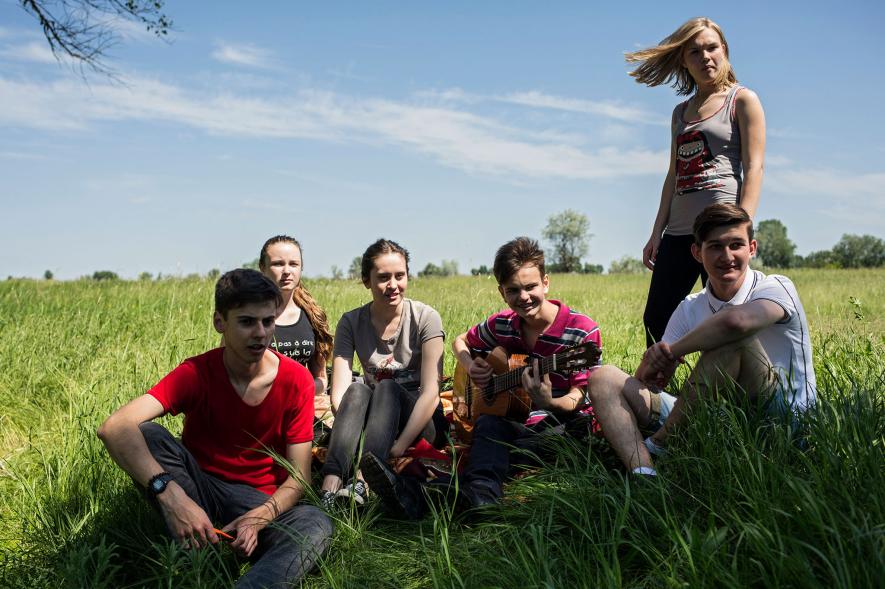 Students have a picnic together and sing to the guitar in Peredilske, near Shchastya, Luhansk area.Photograph by Anastasia Vlasova

“War is not only soldiers and trenches,” says Vlasova, who has covered the front lines since 2014, but grew tired of only photographing the fighting. It’s also local people who need to continue—and in the case of the youth –– build, their lives in the midst of conflict. Vlasova says the teenagers haven’t let the war prevent them from being kids. At the same time, when a balloon suddenly breaks during a school ceremony they all hit the floor, accustomed to dodging anything that mimics the sound of gunfire. 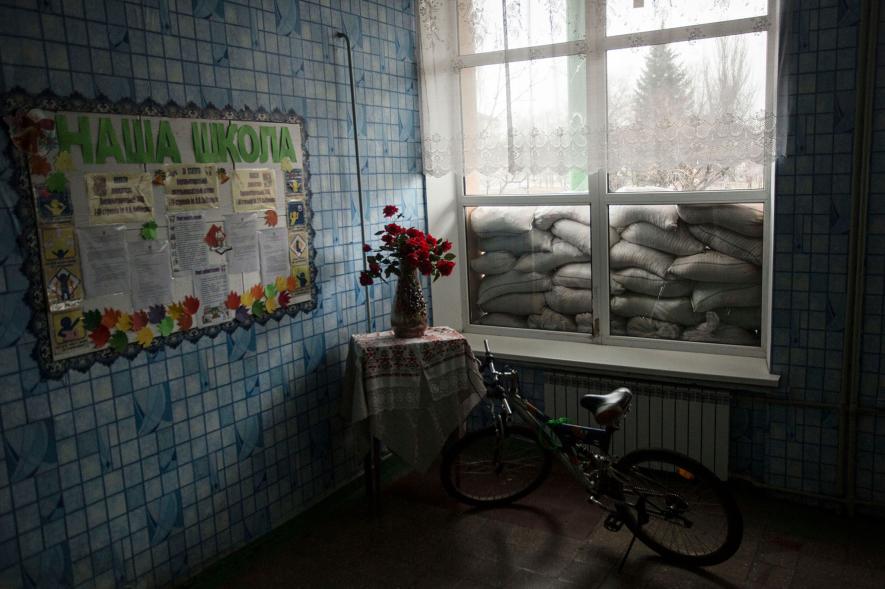 A view of a school window blocked with sandbags in case of shelling in Verkhnyotoretske, Donetsk area. Photograph by Anastasia Vlasova

With only one café, one Wi-Fi place, and not a single cinema, shopping mall, or nightclub, in Shchatya they live like teenagers did 20 years ago, observes Vlasova. They hang out in courtyards, go to their smoking places, dance, sing, and go to high school football games. Cell phone service is spotty and Vlasova doesn’t see the teenagers buried in their phones often. “They’re really speaking to each other,” she says, “for young people I think it’s easier to find happiness in this grim situation because they stick less to the material world.”

They fall in and out of love. Last year aAt summer camp last year 16-year-old Oleh Vilkov fell for a girl from Svitlodarsk, the scene of one of the war’s deadliest battles. To commemorate his love he tattooed her name on his chest. Then, because of the distance between them, he broke up with her.

They worry about what mom thinks, too. Oleh is still waiting for his mom to notice the tattoo so he can stop hiding it. They hold their cigarettes between sticks instead of their fingers so their hands don’t smell when they get home.

Vlasova, who is 24 years old and grew up in Kherson, a small town in southern Ukraine, relates closely to the lives of the teenagers. She didn’t have trouble being welcomed into their group. With teens, she says, you’re either accepted or you’re not. “I just wanted to hang out with them and photograph,” Vlasova says, “I was completely transparent.” This included being clear about when she was acting as a documentarian and acting as a friend, even though the overlap was a challenge. “There were moments I would not photograph at all, especially in the evenings when I would see that they just wanted to hang out and speak to me as a friend and not as a grown up,” she says.

An image of 16-year-old Alyona KryshchenkoElena Krishinka taken on a sunny afternoon encapsulates the emotional complexity Vlasova hopes the series reveals: the beauty of youth and of being a teenager whothat is insecure and courageous all at once. “Her eyes are closed and to me this symbolizes the uncertainty of her future and who she’ll be,” explains Vlasova.

“When you’re young you don’t want to be depressed all the time,” she says the photographer. The reality, though, is that many of the teens take sedatives to sleep. At 15 and 16 years old “they’re supposed to be having typical teenage romances and drama.” And they do, but then you go to a football match and a girl tells you a story of when she was visiting her aunt in Luhansk and a main died in front of her at the boarding crossing from fatigue and overheating, recalls Vlasova. For the teenagers, living in a war zone is a combination of horrible and joyful events and it would be easy to let the anger and grieving consume you, but “they’re choosing life in this situation,” says Vlasova.

Vlasova and the teens keep in touch while she’s away documenting other aspects of the war. When she hears about a shelling in their area, which at the moment is nearly every day, Vlasova gets in touch to make sure they’re safe. “Guys, are you at home, are you safe, are you alright?” she writes in a group chat. “I’m home, it’s quiet now, it’s fine, it’s okay,” she’ll hear back. In Shchastya and Popasna, the bond between Vlasova and the teens is strong and she feels humbled she can be a role model. “Look,” she says to them teens, “I come from a small city and I got my education in Kiev and built a career. I’m on my own and this is what I do. You also can do that, there’s always a chance no matter what messed up situation you come from.”

“I’m really grateful that they’ve allowed me into their lives,” says Vlasova.