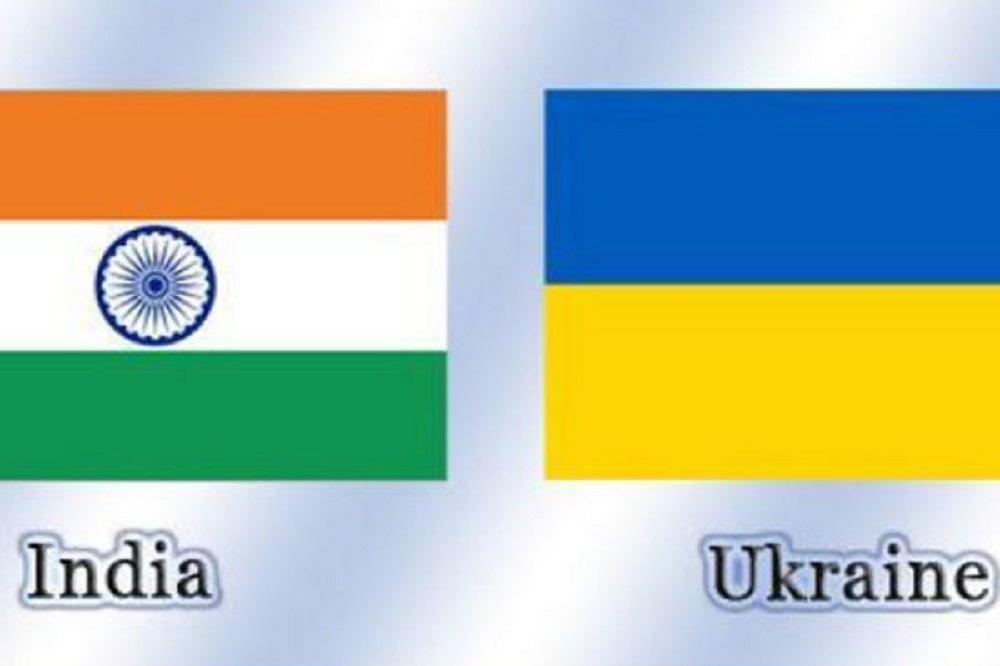 The article is written by UDI Associate Sunil Sharma.

The diplomatic ties between Ukraine and India were established a quarter of century ago. Since then, both nations have moved forward, strengthened their relationship, developed bilateral trade, consolidated people-to-people contact, and ushered new warmth from mutual ties. While more could have been done, overall it is a good start upon which both countries can further evolve. An informative review of the mutual ties, along with likely actions that would deepen the relationship, is presented in the write-up below.

Ukraine attained its independence from the USSR on August 24, 1991. As a free sovereign state Ukraine began the process of initiating and developing diplomatic relations with all the leading nations of the world. From 1991 to 2017, Ukraine has established its diplomatic missions and consular ties in more than 175 countries globally.

Ukraine is celebrating the silver jubilee of its establishment of diplomatic ties with most of its diplomatic partners, and India is one of them. As a matter of fact, India was among the first nations that immediately recognized Ukraine’s independent statehood and welcomed it to the comity of full-fledged free, sovereign nations that could set their own national priorities and meet its international responsibilities without interference or pressure from any third country in the internal matters and external affairs.

The Embassy of India in Kyiv was established in May 1992 and Ukraine opened its Mission in New Delhi in February 1993. Even before independence, Ukraine was valued as a trustworthy partner by India, and its sovereign free status from 1991 further intensified depth to the bilateral relationship.

Let us take a quick look at what all has been gained (pluses) and missed (minuses) in these 25 years of mutual diplomatic relations and ties.

On the political front:

On the trade and economic arena:

On the social-cultural turf

There have been lot of events, happenings and occurrences over these 25 years, especially on the cultural level. Ukraine has more than 50 dance and music clubs or groups throughout the country that are connected and/or related to India–be it teaching and learning Hindi, amateurs dancing to the beats of Indian music, or aficionados enjoying bollywood tunes and movies.

Though bilateral contacts have been established at the highest level, the warmth and closeness that should have come is missing, and one significant dampener in realizing the potential is the Russian invasion, which India finds hard to ward off.

The year 2014 saw change of political guard in both the countries. After the tumultuous Revolution of Dignity, Ukrainians elected Petro Poroshenko as their president, while at almost the same time, Indians brought to power the right-wing nationalist leader Narendra Modi. Almost three years have passed since new leadership took the helm, but neither leader has visited their counterpart’s country. A mutual visit by the head of state would definitely boost, strengthen, and consolidate the bilateral ties between Ukraine and India.

The Indian side has been ambiguous about denouncing Russian invasion of Ukraine and Russia’s occupation of Crimea. Neither has it sided with the international community in enforcing sanctions against Russia. India’s lukewarm reaction and response towards Russian aggression vis-à-vis Ukraine is a big factor impeding further intensification and consolidation of bilateral ties between the two countries.

India should comprehend the reality that Russia has violated Ukraine’s territorial integrity wages war against Ukraine. Russia supports, arms, and provokes the terrorists in launching attacks on Ukraine, which has resulted in the deaths of more than 10,000 soldiers and civilians since hostilities began in early 2014. As a democratic, peace-loving nation, India should be at the forefront of condemning the invasion, and the brutality and torture unleashed by Russia. It should act of its own and not be misguided by false Russian propaganda. It should also side with Western countries in imposing sanctions on Russia in order to stop Russian president Vladimir Putin’s nefarious and sinister goal of destabilizing and disintegrating Ukraine.

The government of India, so far, has been unable to penetrate the Ukrainian market. The Indian business community has restricted trade with Ukraine to a few products, including pharmaceuticals, leather goods, dry fruits, and commodities, whereas much more can be done in this field. India can explore the export of coal, diamonds, gold jewelry, electronics, and electrical items – to name a few products. In the services sector, India might consider banking, insurance, outsourcing, IT training, financial, and capital markets expertise and other similar areas in which India excels and is recognized globally for her talent, skills and prowess. In short, being innovative, adventurous and a little more proactive in the Ukrainian market would handsomely reward Indian companies.

Therefore, it can be inferred that real progress in terms of bringing both countries closer and developing strong relations (preferred ties) between the two is lacking. Contacts at the highest level are far and few and not as consistent and regular as they could be.

It is pretty difficult to obtain a Ukrainian visa for Indians, as the embassy of Ukraine has its own norms and procedures which make visa applications incredibly arduous–if not a complete nightmare. This may be a result of EU pressure, as Ukraine has porous borders with the EU that can be easily  be crossed by immigrants from Asia and India. The heavy-handedness in the issue of visa approval significantly reduces the number of Indian nationals interested in visiting Ukraine for tourism.

Ukraine can engage India more proactively in the manufacture and production of armaments and defense equipment.

The potential for bilateral trade is abysmally low and a more proactive approach from both the sides would do a world of good to the economies of both countries, and would bring both sides closer economically.

There is vast scope in the agricultural sector, services industry (IT, Communications), defense sector, shoes, leather, and in many other sectors.

Some areas in which both countries can gainfully and profitably engage are:

Actions worth taking from the Ukrainian side:

Similarly the following actions should be considered from the Indian side:

Though commercial and business contacts are maintained, they are not closely focused and regular. Both sides should conduct two annual bilateral business forums. One should be held in India and the other after six months in Ukraine. The themes, industry coverage, and topics of discussion should be well planned, specific, and relevant to the growth of commercial ties between the two nations. Participation in such business forums/business summits should be at the highest level with well-defined involvement of officials to ensure the smooth transition of discussions into real projects along with proper resource allocation and time-bound implementation.

In addition, both the sides should work on intensifying and diversifying the people-to-people contact in the social-cultural milieu. The concerts of various artists and performers should be more regularly organized, and should include diversified segments related to ethno-cultural richness, folklore and linguistic treasures of both the countries. Every quarter there can be visits of group of artists/performers, fully supported by the ministry of external affairs and/or ministry of culture of either country.

As the language and culture of both the countries is unique and distinct it would be worthwhile to show and telecast translated/dubbed popular TV serials, sitcoms and other programs from either country regularly. Thousands interested in knowing more about the respective cultures would benefit from such TV shows.

Exhibitions, book fairs, educational seminars, bilateral conferences, visits of parliamentarians, and exchange programs for faculty and students should be actively carried out in both the countries every year.

It won’t be out of place to plan and organize annual youth exchange programs, which would see the immersion of a few dozen or so young people with the respective cultures of both the countries every year.

And finally, an important course of action on the part of Ukrainian government  might be to collaborate with various Indian institutes, colleges, and universities to run Ukrainian language courses. These would offer Indian students the opportunity to learn the language and know more about the distinguishing attributes and splendid features of Ukrainian society, ethnicity and culture.