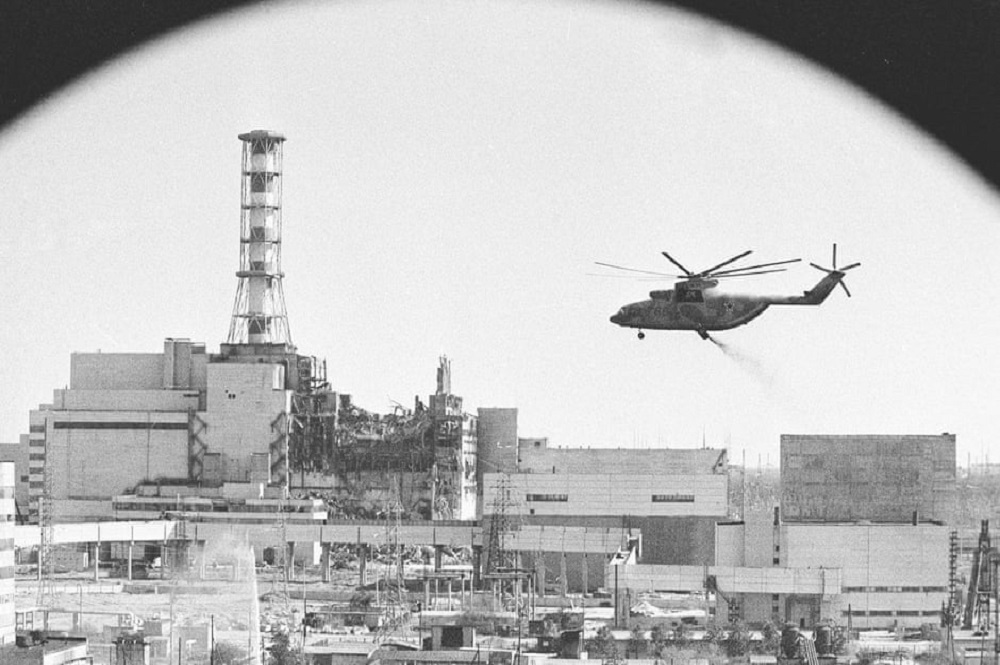 ‘Nuclear is the cleanest energy as long as nothing happens’ … a helicopter ‘bomb run’ on the damaged reactor, one of many during which pilots exposed themselves to high levels of radiation. Photograph: Igor Kostin/RIA News

A Harvard history professor’s “haunting” account of the 1986 Chernobyl nuclear disaster, which delves into the “heartbreaking stories of heroism” from the people who helped to prevent the whole of Europe from becoming uninhabitable, has won the £30,000 Baillie Gifford prize for non-fiction.

The article was originally published by the Guardian.

Serhii Plokhy’s Chernobyl: History of a Tragedy opens as a radiation alarm goes off in a power plant in Sweden, and as staff begin to suspect a Soviet accident. It goes on to lay out what led to the worst nuclear disaster in history, telling the stories of the firefighters, scientists, soldiers, engineers and policemen who worked to extinguish the nuclear inferno in Chernobyl on 26 April 1986. One of more than 200 books submitted for the Baillie Gifford prize, it beat a shortlist that also featured Carl Zimmer’s look at the science of inheritance, She Has Her Mother’s Laugh; Stephen R Platt’s history of the first opium war, Imperial Twilight; and Hannah Fry’s exploration of what it means to be human in the age of the machine, Hello World.

“It is a horror story – of political cynicism and scientific ignorance – in which the world was saved only by heroism and luck … It’s a kind of biblical book – haunting. And it has terrifying lessons for the world,” said the chair of judges, Fiammetta Rocco, the Economist’s culture correspondent. “At the core of it there are heartbreaking stories of heroism – of the firemen, of the people who were sent to close the reactor doors, of doctors, of soldiers – the people on the roof of the reactor who were kicking off burning stuff that had fallen back on it after the explosion. The closer they are to the disaster, the more quickly they die.”

Plokhy, who grew up in Ukraine less than 300 miles (500km) downstream from the damaged reactor, and found in later years that his thyroid showed signs of radiation exposure, writes at the start of his book that “the further we move in time from the disaster, the more it seems like a myth – and the more difficult it becomes to grasp its real-life roots and consequences”.

Announcing its win at the awards ceremony on Wednesday night, Rocco praised the book’s “analysis of the big geopolitical picture, its accretion of dramatic and unforgettable detail, but most of all for its moral imperative”.

Rocco and her fellow judges read 247 books to come up with their eventual winner. “It wasn’t a particularly striking year for political books,” she told the Guardian. “There was lots of technology, lots of algorithms, a lot of memoirs, some straightforward history. Above all, there was a general sense that we are looking to non-fiction to try to explain what is really going on in the world, and what is going to become of our Earth. In that sense, Chernobyl emerged as a very clear winner – it’s about politics, it’s about cynicism, it’s about science, about covering up. It’s about a very close call and it’s about accountability.”

In an interview ahead of the Baillie Gifford awards ceremony, Plokhy stressed that “we have to be super careful with nuclear energy, because it was introduced into the world as the cleanest energy possible.

“Today, with global warming there is an attempt to bring it back as a solution to the problems we have with climate, and the lesson that I learned from looking at Chernobyl is that yes it is the cleanest energy as long as nothing happens. Once it happens, it is the dirtiest energy in the world,” he said.

The other prize judges were the journalist Stephen Bush, the historian Susan Brigden, the mathematician Anne-Marie Imafidon and the philosopher Nigel Warburton.

The Baillie Gifford, formerly the Samuel Johnson prize, has been won in the past by titles including Antony Beevor’s history Stalingrad and Helen Macdonald’s H is for Hawk.