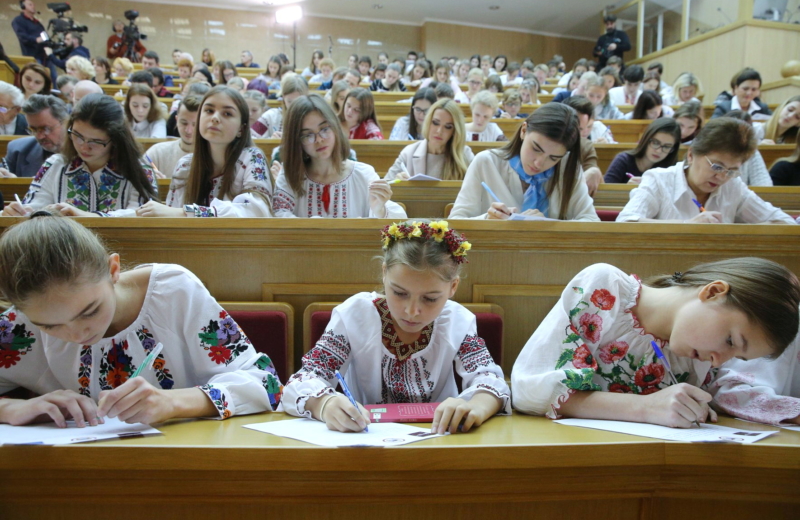 Editor’s Note: This is the second story in the Kyiv Post’s “Honest History” project, a series of stories and videos that aim to debunk myths about Ukrainian history that are used by propagandists. The series is supported by the Black Sea Trust, a project of the German Marshall Fund of the United States. Opinions expressed do not necessarily represent those of the Black Sea Trust, the German Marshall Fund or its partners.

It was rare to hear Ukrainian spoken on the streets of Kyiv when historian Ivan Patrulak, 41, was a child in the mid-1980s. He recalls one incident when he was walking outside, talking to his father in Ukrainian, when they were accosted by a complete stranger. “Why are you teaching your child this useless language,” the stranger growled, in Russian. But today this “useless language” is in daily use by most Ukrainians, and is no longer rarely heard in the capital. According to polls by the Razumkov Center, in 2017 some 68 percent of Ukrainians said Ukrainian was their native language. Only 14 percent consider Russian to be their native language, while 17 percent said they were native speakers of both Ukrainian and Russian.

Yet Russian propaganda likes to misrepresent Ukraine as a country sharply divided geographically, ethnically and politically along linguistic lines: there are ethnic Russians in the east and south and in Ukraine’s Crimea who speak Russian, and ethnic Ukrainians in the west who speak Ukrainian, the story goes.

Nevertheless, Ukrainians and Russians are at the same time “one people,” the Kremlin’s incoherent and false narrative continues.

It is a narrative that is sometimes picked up and lazily repeated by Western media. The real situation is much more complicated than the Kremlin’s propaganda, of course. Many people in the east speak Ukrainian as their native language (mainly in rural areas), and many people in the west speak Russian as their native language (mainly in urban areas).

Surzhyk is most prevalent in east-central Ukraine, but can be heard in all parts of the country, especially in areas adjacent to big Russian-speaking cities. 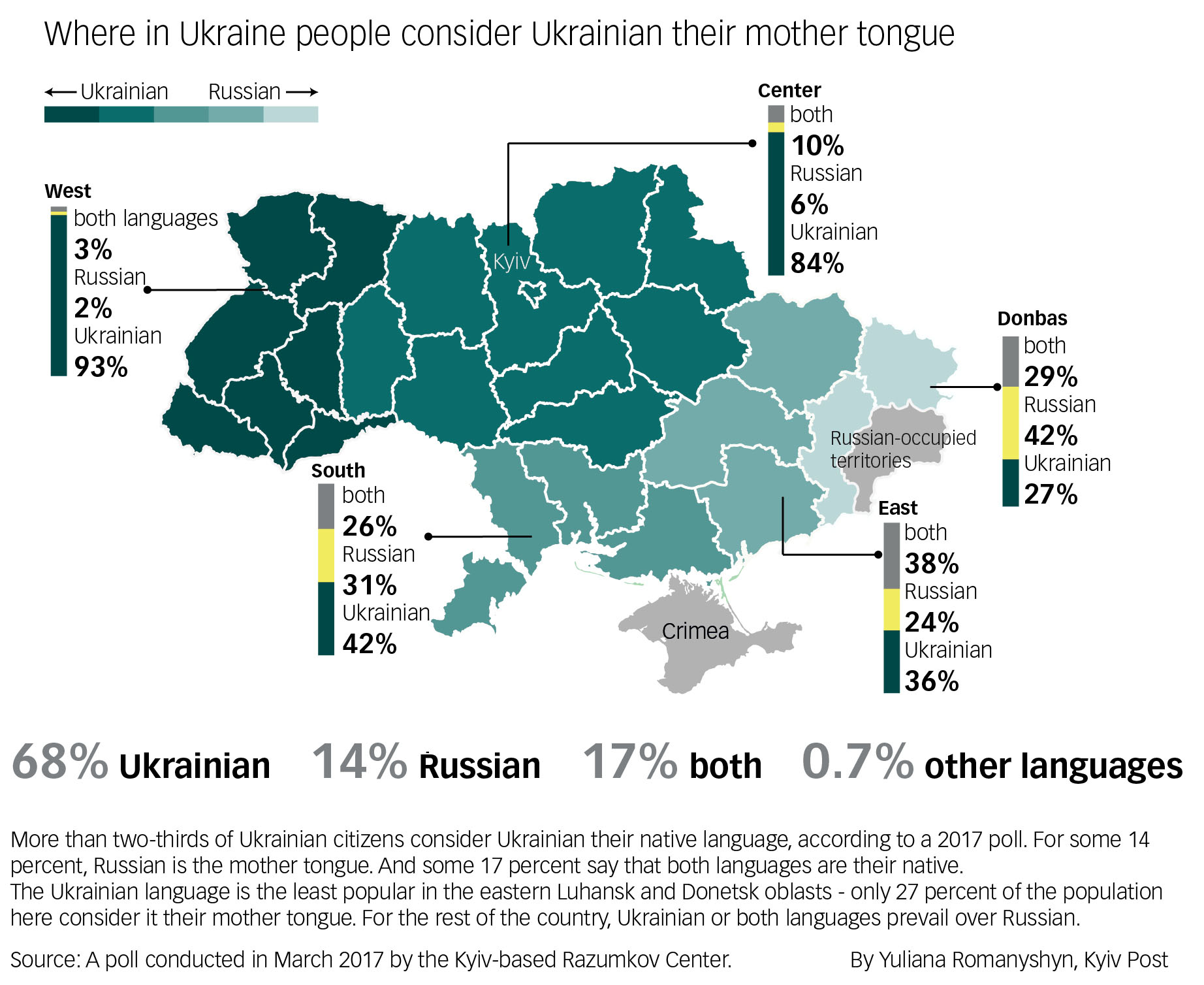 While Ukrainian has been the sole official language of Ukraine since the country declared independence in 1991, Russian is still very widely used, to the extent that some describe Ukraine as a bilingual country, meaning that most Ukrainians speak and understand at least two languages: Russian and Ukrainian.

But Patrulak, now the dean of the history faculty at Kyiv’s Taras Shevchenko National University, disagrees with that description.

“In Ukraine, we don’t have bilingualism — it’s diglossia,” he explains.

Diglossia is a term that describes when two or more languages are used under different conditions within a community, often by the same speakers.

One language is termed “high,” and the second “low” — referring to their status or prestige in society. Patrulak claims that in Kyiv, “Russian is still considered to be prestigious.”

The history of this phenomenon goes back to 1654, when eastern and central Ukraine, including Kyiv, first came under Russia’s influence, and then over the next century gradually lost their autonomy and were absorbed by the Russian Empire.

In the empire, of course, the Russian language was dominant: documents and books had to be written in Russian. If one wanted to get ahead, socially, politically, or careerwise, one had to know Russian. “Russian became the language of educated, rich people, it was proclaimed the ‘high’ language and other people, in particular peasants, should have aspired to speak it,” Patrulyak says.

Meanwhile what is now western Ukraine — Galicia, Bukovina and Zakarpattia — from 1772 to 1795 started to come under the control of the Habsburg Monarchy (later the Austrian Empire and Austro-Hungarian Empire.)

In Galicia, the elites mainly spoke Polish, in Zakarpattia — Hungarian, and in Bukovina — Romanian. And while Ukrainian was still in common use, it was reduced in status to a “low” language, according to Patrulyak.

Linguist Ivan Zilinsky in notes of his impressions of travelling throughout Ukraine in the summer of 1911, says: “Just as in Galicia (western Ukraine) older people are mostly used to speaking Polish at home and switching to Ukrainian in public, eastern Ukrainians speak Ukrainian to each other, but when someone new comes, they switch to the official (Russian) language.”

In the west, the Ukrainian language did not come under as much linguistic pressure as it did in the country’s eastern part, where it was oppressed by the Russian Empire. For the Habsburg Monarchy that held the western Ukrainian territories banning Ukrainian language would mean playing along with the empire’s enemy: Polish nationalists.

However, Polish nobles continued to dominate Galicia both culturally and politically. This was one of the reasons why the Habsburg Monarchy did not ban the Ukrainian language, and in 1787 allowed the start of two-year courses in the Ukrainian language at what is now Ivan Franko National University in Lviv, in a special institute for educating candidates for the Greek-Catholic priesthood.

The Ukrainian language slowly regained prestige, and Ukrainians switched back from using Polish to using Ukrainian. So, while the Ukrainian language was banned in Russian Empire, it encountered fewer obstacles under Austrian and Austro-Hungarian imperial rule, under which western Ukraine remained until 1918.

In east and central Ukraine the situation was much more complicated. On Feb. 9, 1918 Kyiv fell to Bolshevik forces for the first time. Russian General Mykhail Muraviev immediately ordered the execution of Ukrainian nationalists.

Historian Mykola Poletyka in his memoirs writes that Muraviev’s men shot anyone heard speaking Ukrainian. “(Ukrainian author Taras) Shevchenko’s portraits were taken down from the walls and savaged,” he writes. “And Kyiv newspapers every day printed lists of killed Ukrainians. Anyone could be killed on the spot for speaking Ukrainian.”

Mykola Skrypnyk, a Ukrainian Bolshevik leader who was a proponent of the Ukrainian Republic’s independence, recalled how in 1918 people were shot down for carrying Ukrainian-written documents.

“I was almost shot myself but one of the soldiers knew me and that saved my life,” he wrote in his notes, a collection of which was published in 1974. Kyiv was finally taken by Bolsheviks in 1919 resulting in the establishment of the Ukrainian Soviet Socialist Republic.

The price was high: burned down houses, devastated shops and Kyiv streets, filled with corpses of Ukrainian soldiers and civilian Kyivans lying on the ground. In western Ukraine, people weren’t executed on a language basis, but the area went through its own turmoil.

Although Russian was the lingua franca of the Soviet Union, and of course its most prestigious language, by the beginning of 20th century Ukrainians in villages and in the western parts of Ukraine were still mostly speaking Ukrainian.

“But the difference between eastern and western Ukraine is that there are fewer big cities in western Ukraine, and not many factories there, while eastern Ukraine, in particular the Donbas region, became highly industrialized during the Soviet period, with lots of factories and mines,” Patrulyak says.

“This meant that people from all over the Soviet Union came there for work, and all the executives, the people in charge, were of course sent from Russia and spoke Russian.”

Patrulyak says this weighed the scales in favor of Russian: the language became prestigious—the “high” form of speech, while Ukrainian was relegated to the “low” status. Russian started to advance, and Ukrainian to retreat.

Apart from that, the Soviet Union was a multi-lingual empire, and Ukrainians and other citizens of its non-Russian constituent republics used Russian to communicate among themselves.

In western Ukraine, Russian was promoted via schools and educational institutions: Teachers of Russian had 30 percent higher wages in comparison to teachers of Ukrainian, and schools were forced to implement “days of the Russian language.”

Official documents throughout Ukraine had to be in Russian — including academic papers. “However surreal it sounds: we were forced to write academic research about the Ukrainian language in Russian, so that people in Moscow who didn’t speak Ukrainian could evaluate it,” Patrulyak says.

From low to high

That changed with the fall of the Soviet Union and the emergence of independent Ukraine. According to statistics compiled by the Ministry of Education and Science of Ukraine in September 2016, 89.7 percent of schools in Ukraine now conduct lessons in Ukrainian.

Ukrainian language examinations are now compulsory for those wishing to enter higher educational establishments within the country. Russian, once the “high” language of the country, is becoming the “low.”

However, the transition is far from complete, with Russian still widely used in Kyiv and other large cities, especially in the east. Oksana Lebedivna, 23, grew up in Kyiv and went to a Ukrainian-speaking school. She says that although all the classes were conducted in Ukrainian, most of her classmates in their free time preferred to speak Russian.

“People were surprised that I spoke Ukrainian not only during classes but everywhere: it wasn’t common, it wasn’t popular back then,” Lebedivna says. “Thankfully, the situation has changed. Now it is impossible to walk around in Kyiv and not hear Ukrainian.”

The change accelerated with the events of the 2013–2014 EuroMaidan Revolution — a mass, popular uprising against former Ukrainian President Viktor Yanukovych, widely seen as a pro-Russian leader who wanted to keep Ukraine within the Kremlin’s sphere of influence.

According to Dr. Solomiia Kryvenko, a political scientist, in Ukraine language is thus now not only a cultural, but a political issue. It has been made so by Russia’s war on Ukraine in the Donbas — speaking Ukrainian as opposed to Russian may well reflect a person’s political views.

“When the war started, many Russian-speaking people, in particular politicians and social influencers, started to speak Ukrainian in public, and on TV, even if it wasn’t their native language,” Kryvenko says. “By doing so, they are underlining which side they are on: the Ukrainian side.”

It seems that in diglossic Ukraine, Ukrainian is, at last, “high.”