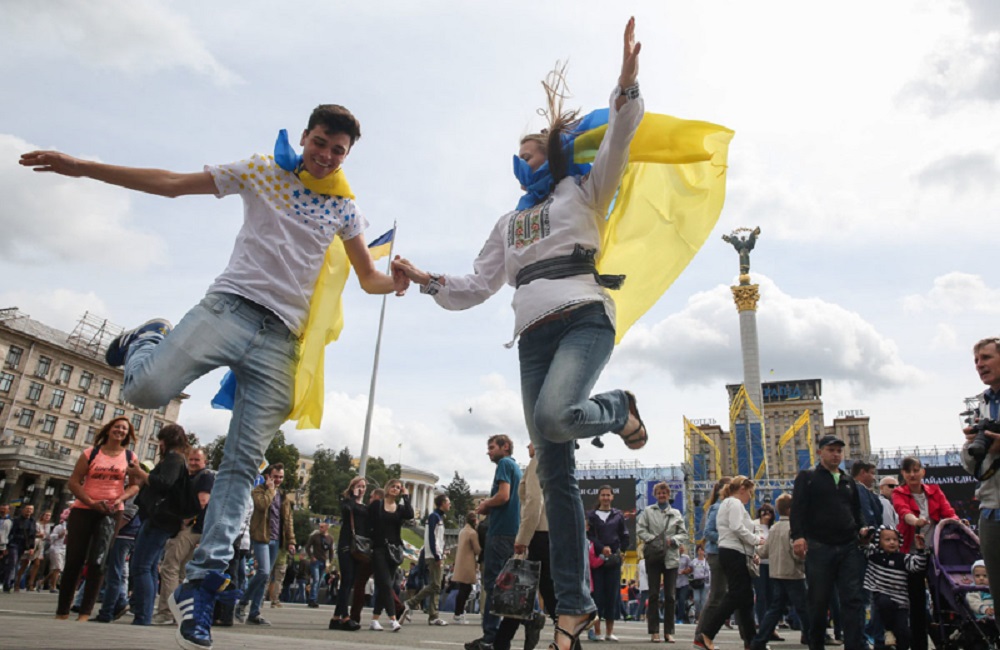 The article was originally published at Kyiv Post. By Olena Goncharova.

EDMONTON, Canada – Which is correct, “Ukraine” or “the Ukraine”?

But there’s one case of article use that Ukrainians never get wrong, while native speakers of English often do: it’s “Ukraine” and not “the Ukraine.”

The erroneous “the Ukraine” can be read in the foreign press, and heard on television and radio. U. S. President Donald Trump even made the error during his meeting with Ukrainian President Petro Poroshenko in 2017. And as recently as on July 2, the White House spokeswoman Sarah Huckabee Sanders said U.S. sanctions “will remain in place until Russia returns Crimea to the Ukraine.”

In fact, saying “the Ukraine” is more than a grammatical mistake — it is inappropriate and disrespectful for Ukraine and Ukrainians. This linguistic bad habit has its roots in both politics and history.

In English, countries, with few exceptions, never take an article. Exceptions occur usually when a country is considered to be made up of distinct parts, such as the United States, the Netherlands, or the United Kingdom — they are plural in grammatical form or sense.

Most counties, like Germany, France, Canada, Spain, Russia and China, don’t take an article, as they are grammatically singular.

The definite article is used when referring to a sub-part or region of a country, however. Thus we have the Fens in England, the Algarve in Portugal, and the Highlands in Scotland. The use of the article in this case carries information about the political nature of the area of land that is being talked about.

The use can thus change as political conditions change over time. For instance, the part of South America where the country of Argentina is now located used to be known as “the Argentine,” meaning, “the place (region) where the silver comes from.” After the region became a fully-fledged country, the correct way to refer to that part of the globe became “Argentina.”

For the same reason, it is incorrect to say “the Ukraine.” Ukraine is no longer a part of another country or empire. After many hard battles, it has become an independent, unitary state.

In February 1917, Ukraine made its first attempt in modern times to become independent, setting up a provisional government within Russia following the overthrow of the Tsar. This move brought Ukrainian political activists one step closer to proclaiming independence, in January 1918.

However, the situation in Europe wasn’t favorable for the nascent country. As World War I raged, Ukraine was seen as an ideal food source for the starving citizens of Germany and Austria. Seizing the opportunity, Germany and Austria brought in troops to Ukraine and forced the departure of occupying Russian troops.

That next period of independence was short-lived though: The Ukrainian government briefly allied itself with Poland, but could not withstand the subsequent Soviet assault. In 1922, Ukraine became one of the first republics of the Union of Soviet Socialist Republics.

It did not regain its independence until the collapse of the Soviet Union in 1991.

The Russian war against Ukraine, which started with the annexation of the Crimean peninsula in 2014, made the issue of the “the Ukraine” grammatical error particularly sensitive.

“In the case of Ukraine, a unitary state, using ‘the’ is inappropriate and incorrect. The continued use of the definite article in front of the name of an independent state — Ukraine — is therefore an indirect (although often unintentional) denial of statehood,” Grod said.

Peter Dickinson, a nonresident fellow of the Atlantic Council explains that the term “the Ukraine” first entered popular usage during the Soviet era, at a time when the Kremlin was particularly eager to counter perceptions of Ukraine as being a separate and distinct nation. Between 1922 and 1991, Ukraine was officially known in English as the Ukrainian Soviet Socialist Republic.

This use of language by Russia to diminish Ukrainian statehood continued after Ukraine gained independence, and in the Russian language as well — specifically in the use of the Russian prepositions “na” (on) and “v” (in).

During the Soviet era, Russians used the construction “na Ukraine,” roughly translated as “in the Ukraine.” Although it was generally accepted as a norm, this wasn’t technically correct even at that time. Ukraine was the only republic in the Soviet Union that this preposition was used with.

One reason why the Russian preposition that means “in the” might have stuck to Ukraine lies in the etymology of the word “Ukraine,” which is believed by many scholars to come from the Old Slavic word “okraina,” which means “the borderland.” This translation often prompted the use of the article.

However, even this is debatable, as different historic schools trace the name “Ukraine” to the same root word, but with a different meaning. It has variously been interpreted to translate as “homeland,” “country,” “land,” “separated piece of land” or “separated part of the tribe.”

After independence in 1991, Ukraine asked Russia to stop referring to it as “na Ukraine” and instead switch to “v Ukraine,” which means “in Ukraine” as opposed to “in the Ukraine.” Russian officials and media — even the liberal ones — nevertheless continue to use the “na Ukraine” construction.

Grod believes that the best way to deal with those who say and write “the Ukraine” is “to correct them and explain why it is both inappropriate and disrespectful to Ukrainians and Ukraine.”

Old bad habits might be tough to break, but since Ukraine gained independence from the Soviet Union, usage of the article has declined steadily. The Ukrainian government has also expressed their preference for dropping it.

The Associated Press style guides (which the Kyiv Post follows) and the UK newspaper the Guardian clearly state that the definite article should not be included when referencing Ukraine.

The issue of whether to place “the” in front of “Ukraine” may appear to be an obscure grammatical point, but it actually carries a lot of meaning, connected to the long and painful history of Ukraine’s struggle for independence.