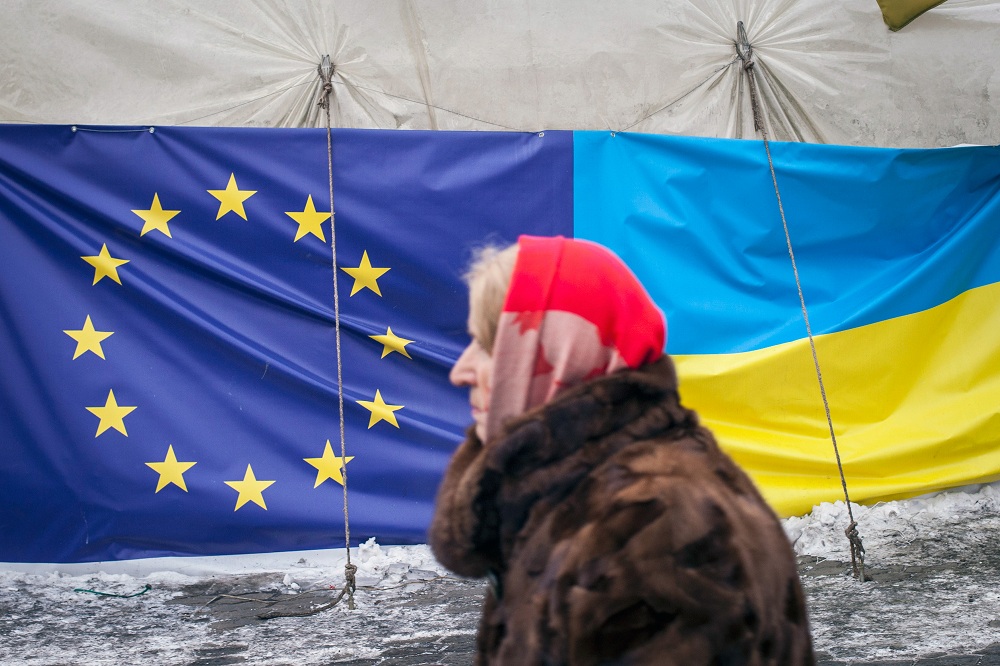 KIEV, UKRAINE – JANUARY 28: A woman walks past a tent displaying the European Union and Ukrainian flags in Independence Square on January 28, 2014 in Kiev, Ukraine. Ukraine’s parliament is holding a special session called over continuing unrest in the country and Prime Minister Mykola Azarov has offered to resign. (Photo by Rob Stothard/Getty Images)

The article was originally published at the New Eastern Europe.

West-Russia relations are approaching a dangerous low point or even point of no return that may be decisive for the further development of Russian-NATO relations, already under severe stress since the beginning of the Ukraine crisis in 2013-2014. It is also clear that the United States-Russia confrontation has become global rather than regional, as the case of Syria clearly shows. This also reverberates on NATO-Russia relations, adding further tensions, especially in the Baltic Sea and in the Black Sea, which have lately become hot spots for possible military confrontations, either spontaneous or through premeditated military incidents.

Ukraine is undergoing radical transformations, though reforms are stalling, and the conflict in Donbas is still costing many casualties among civilians and the military. The window of opportunity for reforms in Ukraine may soon close, provoking a great dissatisfaction in the West and further tensions and political estrangement (“Ukrainian fatigue”) between Kyiv and the Western capitals, especially Washington and Berlin, which are the most committed to Kyiv; politically, economically and also militarily, in particular the US. This might also imply in the future a strong increase of military support to Ukraine by NATO and, again, a renewed burden share row among NATO members.

Russia’s intentions are apparently clear: it is all about the bleeding, the draining of as many as possible of Ukraine’s material and psychological resources, in order to prevent the implementation of  political and administrative reforms and above all to prevent Ukraine from entering NATO and the transatlantic community in general. Nevertheless, on the one hand the waging of the “hybrid war” in Donbas  substantially strengthened the Ukrainian will of resistance and its national unity, to the clear detriment of the aggressor. On the other, Russia has to bear high human and economic costs as well. The Minsk 2 Agreement alone will not be a solution. This will come exclusively from a political settlement of the military and political status of Ukraine, in the framework of new West-Russia relations, which will put a definitive stop to this enduring political and military standoff.

The price to be paid, in terms of Moscow’s probable political conditions, would be: the suspension of political reforms, the federalisation of the eastern Ukrainian regions along with a military neutrality status for Ukraine and a no to the country’s accession to NATO. But the West’s political and economic interests are in large measure opposite and therefore a viable and difficult bargain with Russia must still be found.

The West will keep on supporting Kyiv politically and financially in the forseeable future, at the same time demanding results, in particular from President Poroshenko himself, such as the implementation of reforms, de-oligarchisation, fight against a corruption that deeply pervades the whole country and a reform of the fiscal system, which is also closely and directly connected to the financial needs of the Ukrainian army and its urgent need to upgrade from a Soviet to a NATO standard. Cooperation in this sector could be further enhanced in order to make Ukraine’s defence capabilities viable, self-sustainable and hence capable of effectively repelling any future military aggressions, at least in the medium and long term. In this respect, another very important factor is the transformation of the Ukrainian military industry (Ukroboronprom) to the country’s military needs and not just to its military exports, one of its major sources of income.

It is also essential to put an end to the severe mismanagement and corruption in the Ukrainian military sector, which damages the effectiveness of its military industry and substantially weakens its fighting capabilities. The reestablishment of a Ukrainian military fleet is essential in order to contribute to the control of the Black Sea, whose strategic condition is actually in a flux.

Gregorio Baggiani is a scientific consultant for international organisations and Italian and foreign online reviews. In the past, he worked for the OSCE/ODIHR as Long Term electoral observer in the post-Soviet area. His website is www.spaziopostsovietico.it