Liberals lost most of the arguments this year. They should not feel defeated so much as invigorated 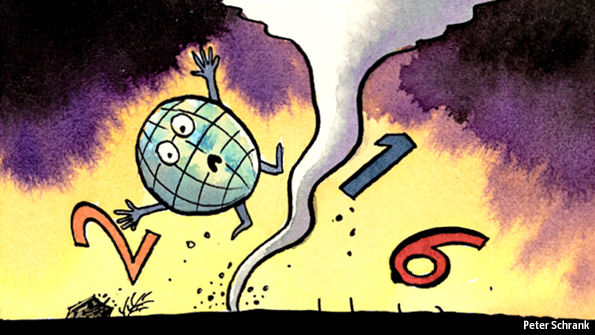 The article was originally published at The Economist.

FOR a certain kind of liberal, 2016 stands as a rebuke. If you believe, as The Economist does, in open economies and open societies, where the free exchange of goods, capital, people and ideas is encouraged and where universal freedoms are protected from state abuse by the rule of law, then this has been a year of setbacks. Not just over Brexit and the election of Donald Trump, but also the tragedy of Syria, abandoned to its suffering, and widespread support—in Hungary, Poland and beyond—for “illiberal democracy”. As globalisation has become a slur, nationalism, and even authoritarianism, have flourished. In Turkey relief at the failure of a coup was overtaken by savage (and popular) reprisals. In the Philippines voters chose a president who not only deployed death squads but bragged about pulling the trigger. All the while Russia, which hacked Western democracy, and China, which just last week set out to taunt America by seizing one of its maritime drones, insist liberalism is merely a cover for Western expansion.

Faced with this litany, many liberals (of the free-market sort) have lost their nerve. Some have written epitaphs for the liberal order and issued warnings about the threat to democracy. Others argue that, with a timid tweak to immigration law or an extra tariff, life will simply return to normal. That is not good enough. The bitter harvest of 2016 has not suddenly destroyed liberalism’s claim to be the best way to confer dignity and bring about prosperity and equity. Rather than ducking the struggle of ideas, liberals should relish it.

In the past quarter-century liberalism has had it too easy. Its dominance following Soviet communism’s collapse decayed into laziness and complacency. Amid growing inequality, society’s winners told themselves that they lived in a meritocracy—and that their success was therefore deserved. The experts recruited to help run large parts of the economy marvelled at their own brilliance. But ordinary people often saw wealth as a cover for privilege and expertise as disguised self-interest.

After so long in charge, liberals, of all people, should have seen the backlash coming. As a set of beliefs that emerged at the start of the 19th century to oppose both the despotism of absolute monarchy and the terror of revolution, liberalism warns that uninterrupted power corrupts. Privilege becomes self-perpetuating. Consensus stifles creativity and initiative. In an ever-shifting world, dispute and argument are not just inevitable; they are welcome because they lead to renewal.

What is more, liberals have something to offer societies struggling with change. In the 19th century, as today, old ways were being upended by relentless technological, economic, social and political forces. People yearned for order. The illiberal solution was to install someone with sufficient power to dictate what was best—by slowing change if they were conservative, or smashing authority if they were revolutionary. You can hear echoes of that in calls to “take back control”, as well as in the mouths of autocrats who, summoning an angry nationalism, promise to hold back the cosmopolitan tide.

Liberals came up with a different answer. Rather than being concentrated, power should be dispersed, using the rule of law, political parties and competitive markets. Rather than putting citizens at the service of a mighty, protecting state, liberalism sees individuals as uniquely able to choose what is best for themselves. Rather than running the world through warfare and strife, countries should embrace trade and treaties.

Such ideas have imprinted themselves on the West—and, despite Mr Trump’s flirtation with protectionism, they will probably endure. But only if liberalism can deal with its other problem: the loss of faith in progress. Liberals believe that change is welcome because, on the whole, it is for the better. Sure enough, they can point to how global poverty, life expectancy, opportunity and peace are all improving, even allowing for strife in the Middle East. Indeed, for most people on Earth there has never been a better time to be alive.

Large parts of the West, however, do not see it that way. For them, progress happens mainly to other people. Wealth does not spread itself, new technologies destroy jobs that never come back, an underclass is beyond help or redemption, and other cultures pose a threat—sometimes a violent one.

If it is to thrive, liberalism must have an answer for the pessimists, too. Yet, during those decades in power, liberals’ solutions have been underwhelming. In the 19th century liberal reformers met change with universal education, a vast programme of public works and the first employment rights. Later, citizens got the vote, health care and a safety net. After the second world war, America built a global liberal order, using bodies such as the UN and the IMF to give form to its vision.

Nothing half so ambitious is coming from the West today. That must change. Liberals must explore the avenues that technology and social needs will open up. Power could be devolved from the state to cities, which act as laboratories for fresh policies. Politics might escape sterile partisanship using new forms of local democracy. The labyrinth of taxation and regulation could be rebuilt rationally. Society could transform education and work so that “college” is something you return to over several careers in brand new industries. The possibilities are as yet unimagined, but a liberal system, in which individual creativity, preferences and enterprise have full expression, is more likely to seize them than any other.

The dream of reason

After 2016, is that dream still possible? Some perspective is in order. This newspaper believes that Brexit and a Trump presidency are likely to prove costly and harmful. We are worried about today’s mix of nationalism, corporatism and popular discontent. However, 2016 also represented a demand for change. Never forget liberals’ capacity for reinvention. Do not underestimate the scope for people, including even a Trump administration and post-Brexit Britain, to think and innovate their way out of trouble. The task is to harness that restless urge, while defending the tolerance and open-mindedness that are the foundation stones of a decent, liberal world.