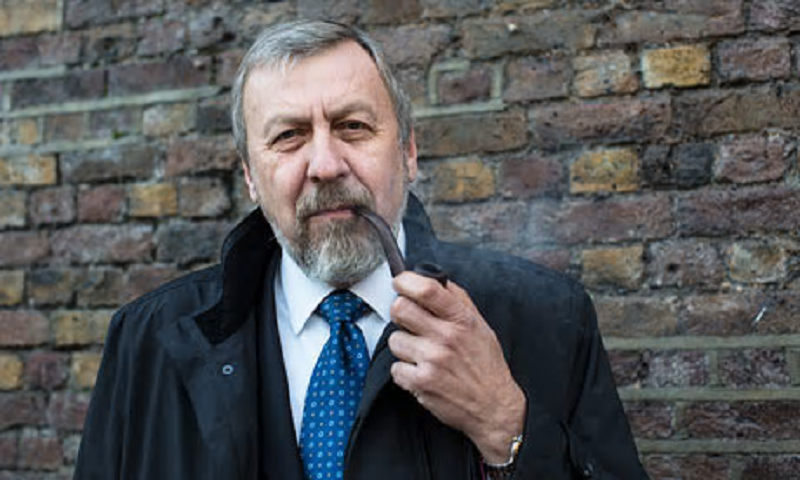 Andrei Sannikov is a former diplomat and Belarus’s most high-profile opposition figure. Photograph: Sean Smith for the Guardian

The article was first published at The New Eastern Europe. By Andrei Sannikov, a Belarusian activist and politician who ran in the 2010 presidential elections and was later imprisoned for his political protest (2010-2012).

On December 8th 1986 at 23:50, in the hospital of a watch factory in the town of Chistopol, Tatar Autonomous Soviet Socialist Republic, Anatoly Marchenko, a Soviet prisoner of conscience, died at the age of 48. He was transferred to this hospital from prison after his health deteriorated dramatically as a result of a hunger strike that he declared in August of the same year and continued for several months. He wrote in his letter, which was published 12 years after his death: “Since August 4th I have been on a hunger strike, demanding a stop to the torture of political prisoners in the Soviet Union and their release.” He was buried unnamed under number 646.

However, that freedom was very short-lived. After the collapse of the Soviet Union 25 years ago, the regimes of the former Soviet republics, now independent states, soon reverted to the repressive practices of the past. Over the years, these practices were perfected and became some of the most effective tools used by autocratic and dictatorial regimes in order to maintain their power indefinitely.

In Belarus events were developing in a very strange and tragic way. In the beginning, of all the former Soviet republics, Belarus was the only parliamentary state. Moreover, it was at the forefront of establishing an internationally recognised democracy. It was the first post-Soviet state to apply for membership in the Council of Europe, as it was understood that this was a necessary step to being recognised as a democracy (today, it is the only European state that is not a member of the Council). Belarus was also one of the first to recognise and adopt the Optional Protocol to the International Covenant on Political and Civil Rights, a taboo in the Soviet Union since it empowered individuals to defend human rights against their own state. During this short period of liberalisation and recognition of international standards in the area of human rights protection, Belarus made a huge contribution to international security in both nuclear and conventional terms. It is yet further proof that only a democratic country can be a real contributor to security, regardless of whether it is based on hard or soft power.

The dangers posed by power-hungry Alyaksandr Lukashenka, who became the first president of Belarus, were underestimated, both inside the country and internationally. He ushered in a new era of ruthless, greedy, internationally irresponsible and unpredictable rulers in the three founding members of the Commonwealth of Independent States, a divorce mechanism established to avoid bloodshed on the territory of the former Soviet Union. The leaders of Belarus, Russia and Ukraine, Stanislav Shushkevich, Boris Yeltsin and Leonid Kravchuk, who dissolved the totalitarian state were long gone from power and their successors were busy reversing the process of democratisation in the former Soviet republics. One exception has been Ukraine, which made a second and more serious attempt to break away from the past and stop the authoritarian tendencies in its politics. It is now trying to build its democratic and independent future.

In Belarus Lukashenka has managed to build a model of a dictatorial state that is quite eagerly and effectively exploited by Vladimir Putin. The same model is also utilised in other former Soviet states and was brought to its logical, aggressive completion by the Kremlin, which started war in Europe against Ukraine. The uncertainty of the 1990s transformed into the consolidation of autocratic and dictatorial regimes that created a true “cooperative of dictators”, consisting of a majority of the former Soviet republics. Their leaders may be at odds with each other on different issues such as economic, social, trade and even political matters, but they always agree and support each other’s contempt for human rights and basic freedoms.

The primary shared attribute of all these regimes is political prisoners, people who are thrown in jail for their political beliefs that do not coincide with the views of a ruling group and who are not afraid to speak up and act publicly against the regimes in their respective countries. It is quite indicative that Belarus was not known for any serious human rights violations in the first few years following the collapse of the Soviet Union. It all started when Lukashenka came to power and since then, the situation has only been getting worse.

One thing should be remembered about political prisoners and political repression in general: it illustrates both the nature and the vulnerabilities of a regime. Repression is directed at the parties a regime considers to be its greatest threat(s). This can even take the form of political assassination, as was the case in Belarus where, in 1999, several opposition leaders were abducted and never seen again, notably Viktar Hanchar and Yuri Zaharenka. In Russia, several opposition politicians have been murdered, including most recently, Boris Nemtsov.

Nevertheless, dictatorial regimes are vulnerable, despite all their demonstrative strength. Firstly, they are not protected by international law. This is the most important factor in both domestic and international fight for freedom and against tyranny. Even though it looks as though dictators are happy to demonstrate their contempt for the international community, especially when it voices concerns or demands respect for human rights, they are in fact closely watching the international reaction to abuses and respond with harsher repressions when the reaction is weak.

It is interesting to note one striking phenomenon. Over the last 10-15 years, there has been a visible increase in the number of human rights organisations, both domestic and international. At the same time, there has been a marked growth in both the number and severity of human rights violations. This is not because of the failure of human right defenders, the majority of whom are committed, courageous and honest. Rather, the failure of the relevant intergovernmental organisations to uphold human rights standards is to blame. In Europe, where Belarus belongs, the relevant organisations include the Council of Europe, the European Union and the Organisation for Security and Co-operation in Europe (OSCE). Their failure to act directly affects the human rights situation in countries like Belarus.

Unfortunately, there is an increasing tendency towards realpolitik practices regarding human rights issues. This tendency was strengthened following the invasion of Ukraine by Russia and pro-Russian forces. European and international organisations that are founded on strong democratic principles have begun diluting these foundations by taking soft positions on human rights abuses, justifying them by referring to “changed geopolitical circumstances”. They increasingly yield to the pressure of dictatorial regimes and their supporters. Geopolitical, economic, and business arguments have begun to prevail in many cases where dictatorial regimes, such as Belarus, are discussed and decisions are made. As a result, human rights have fallen victim to the politics of “new pragmatism”.

This is especially true of the parliamentary bodies in those institutions which tend to overlook human rights abuses and tacitly support repressive governments and pro-government NGOs. There is a tendency to choose or even help create think-tanks that are closely linked to the regimes and base an overall assessment of the situation on their loyal analyses. It has to be stressed that such policies have never been successful and that more often than not, they lead to harsher repressions by a regime, provoke disturbances inside a dictatorship and destabilise the situation in a region. In this time of multiple European and global crises, the need to uphold values has become pressing. The values matter. Placing emphasis on them helps solve geopolitical problems, not vice versa.

It is important to remember that the fate of political prisoners directly and proportionally depends on international attention, solidarity and action. Of course, the key element is domestic solidarity and attention, which in turn leads to international campaigns. When we speak of political prisoners, we refer to non-democratic countries that have no separation of powers and no independent judicial system. In these cases, the international community can act as a democratic judiciary, highlighting human rights violations and demanding an end to them. The absence of international pressure leads to more impunity for the perpetrators, both individual officials and state institutions.

For political prisoners, it is extremely important to know that they are not forgotten and that their sacrifice is being recognised, both in their countries and around the world. I understand this very well based on my own experience, when I was thrown behind bars for running against “the last dictator in Europe” and recognised by the international community as a political prisoner.

There are two kinds of approaches to being in prison. Some argue that in prison, there is life and even freedom: it just depends on the person and his or her perception of reality. Others disagree.

I belong to the latter camp. For me, prison is existence without life. Moreover, I believe that it is dangerous to presume any normality in an abnormal situation when one is deprived of freedom. It is an ordeal that one has to go through in the fight for freedom and principles and try to survive. However, behind bars, it is crucial to have a strong connection with the outside world, because it is outside prison that life and freedom exist. That is why letters of support to political prisoners are so important. Receiving support from people who you do not know is as important as the backing and love of family and friends.

Political prisoners are jailed for their beliefs and principles. They fight for freedom, not just of their countries, but for all of us. They care about freedom and justice, they care about us and that is why we must care about them. Speaking of international attention to the plight of political prisoners, it is important to remember that we cannot create “first class” and “second class” prisoners. It is often the case that attention is focused on better known names, while lesser known individuals are ignored. Tyrannies understand this and apply their repressive practices accordingly. Their purpose is to make repressions invisible to the outside world and ensure they are ignored by the international community. By harassing and jailing less visible activists, they try to achieve two goals simultaneously: to keep society under control and under pressure and to avoid the strong international reaction that would inevitably ensue if more prominent activists are incarcerated.

This is what is currently happening in Belarus, where the regime, under the burden of international pressure, released some well-known political prisoners to placate public opinion but then immediately began to jail other, less “famous” hostages, such as human rights defender Mikhail Zhemchuzhny. European politicians who are eager to improve relations with Lukashenka prefer to ignore these facts, consequently easing pressure on the regime to change. This kind of “new pragmatism” will only lead to new and harsher repressions.

Not long ago in Łódź, I had the opportunity to listen to the famous Chinese dissident, author, musician and poet Liao Yiwu, who spent several years in a communist prison. He impressed me with one very simple thought: “The Berlin Wall would not have fallen if not for the Tiananmen Square protests.” He said in very simple terms that the fight for freedom is universal and has to be supported by the democratic world, in every corner of the world.

Anatoly Marchenko’s tragic sacrifice led to the freedom of many because of the strong reaction it provoked around the world. The attention and reaction of ordinary people, the media, human rights defenders and all those who care about any political prisoner is of great importance, since it really does force politicians to act. That is the power of those who care and that power can make our world a better place.