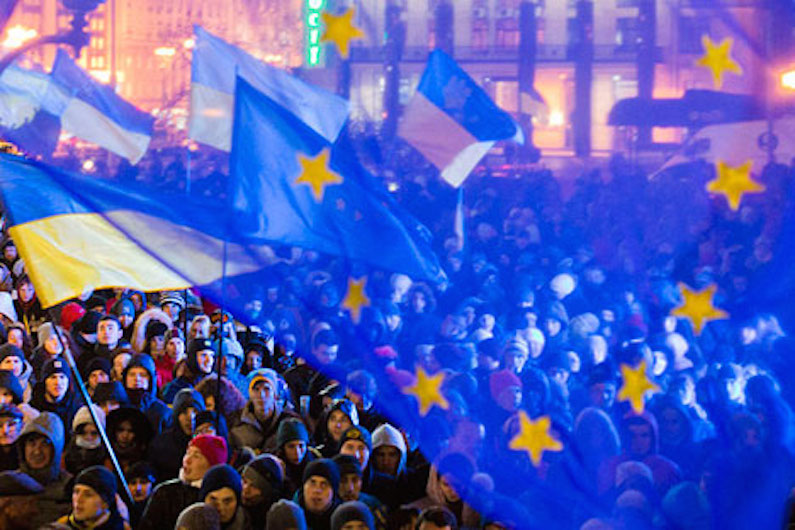 Ukrainian journalist and essayist Mikhail Dubinyansky analyses what is left of the pro-European idealism two years after the victory of the Maidan protests. First published in Eurozine.

Ukraine’s Revolution of Dignity was triggered by the government’s decision to postpone signing the long-awaited Association Agreement with the European Union. Protesters on Kyiv’s streets chanted “Ukraine is Europe!”, and waved EU and Ukrainian flags side-by-side. Two years after the victory of the Maidan protests, what is left of this pro-European idealism? Ukrainian journalist and essayist Mikhail Dubinyansky takes stock.

In 2016, euro-optimists will finally have a good chance to triumph over sceptics and whingers, if at last the EU grants Ukraine a visa-free regime. The long-awaited #перемога (Ukrainian for #victory) will be particularly crucial as our society increasingly equates Europe with #зрад (#betrayal), along with the Lipetsk Confectionary Factory, the Russian arm of president Petro Poroshenko’s candy empire. Frustration with Europe comes in waves, provoked by the humiliating Minsk negotiations, the disturbing news about the forthcoming Dutch referendum on the EU-Ukraine Association Agreement, or Paul Moreira’s controversial documentary Ukraine: The Masks of Revolution, aired by the French Canal+ on 1 February 2016.

If we sum up the issues trending on social media over the past year, there emerges an indictment roughly along the following lines:

– Europe has been infected with the blight of tolerance, allowing aggressive immigrants to multiply freely and now it cannot cope with their numbers;
– Europe underestimates the threat posed by Kremlin, is not prepared to confront Putin and, generally, is teeming with agents of Moscow;
– Europe is mercantile and interested only in its own advantage;
– If Europe hadn’t imposed the shameful Minsk agreement on us, Ukrainian tanks would have long been in Donetsk and Lugansk by now;
– Europe doesn’t repaint Facebook avatars yellow and blue, the Ukrainian national colours, and doesn’t lay flowers in front of Ukrainian embassies;
– Europe doesn’t understand that human rights and freedom of expression ought not to apply to hostile Russian nationalists;
– Europe criticizes Ukrainian radicals who are above criticism because they are all of them heroes and patriots.

The list could go on but it’s hardly necessary to continue; the trend is obvious.

Before the war, supporters of the EU were at loggerheads with proponents of the Eurasian Customs Union, and euroscepticism implied a pro-Russian stance. Vladimir Putin ensured that pro-Russian attitudes in Ukraine have been completely marginalized. However, nature cannot tolerate a vacuum and 2014-2015 saw the emergence of an anti-European discourse that is not connected to Moscow. From this perspective, Europeans are weaklings and dimwits who don’t understand life, yet they think they can lecture Ukraine, a country grown wise and steely through war. Instead of the EU, Israel or Erdogan’s Turkey are currently in trend – now those are countries whose example we should emulate!

So far, this new trend hasn’t managed to dislodge the popular slogan “Ukraine is Europe”. However, we should bear in mind that there aren’t many really convinced supporters of EU integration in Ukraine. Rather, supporters of the EU represent a rather shallow liberal stratum, consisting primarily of individuals who have come to know the EU well through professional, cultural and educational contacts, people who have had an opportunity to experience Europe and imbued the notion of Europe with real substance. For these people, European values are not an abstract array of slogans but a way of life, which they are keen to import into our country, piecemeal if need be.

At the same time, the bulk of pro-European citizens of Ukraine are just fellow travellers. They support rapprochement with the EU because nowadays it is regarded as the right, progressive and patriotic thing to do. But if tomorrow a “third way for Ukraine” were to acquire this status, the same people would happily shed their European ideals. And judging by the complaints about Europe in the Ukrainian media and especially in social networks, there is a growing demand for an alternative national idea.

What makes the idea of a third way so attractive? In attempting to catch up with European standards, Ukraine is condemned to play the role of apprentice and outsider for a long time to come. We are inferior by contemporary European standards: its most backward, poorest, least civilized country. A chasm yawns between us and the developed European nations, which the destructive war has made even deeper. Overcoming this will require years of painstaking effort and a great deal of homework. In this endeavour, the courage and self-sacrifice demonstrated by Ukrainians in military action will be no substitute for routine reforms. On the contrary: the ordinary Dutch citizen voting in the April 2016 referendum on Ukraine’s association with the EU may well be put off by balaclava-wearing louts. Unfortunately, a full belly doesn’t understand an empty one. Likewise, a man at peace doesn’t understand a man at war, however unfair and demeaning this may seem to us.

If, however, we give up on emulating Europe, we will be relieved from this feeling of inferiority. Much of what appears problematic from the European point of view will become a subject of national pride. The Ukrainians may have been forced into war but at least we were the first to fight back against global evil. We may be poor, and the war may have made us even poorer, but that only emphasizes our steadfastness. And even if violence has gone off the scale in our country, at least everyone can see how brave we are. In this worldview an impoverished and fighting Ukraine is not inferior but rather greatly superior to the well-fed and cowardly European Union. And a Ukrainian thug in camouflage is a figure of far greater authority than some clumsy European oaf hung up on tolerance and human rights. They’re the ones who should learn from us, not us from them!

Russia went through a similar process at the turn of the millennium: the second Chechen war, Aleksei Balabanov’s films, discussions about national character and the lack of spirituality abroad, reflected in mantras such as: “it’s war that makes a man out of a boy” or “if you’re in the right you’re stronger.” As soon as the Russians stopped imitating the West and started believing in their own uniqueness, their self-esteem went through the roof. Admittedly, the result is the current theatre of the absurd.

Of course, there is no risk that the Ukrainians will follow their neighbour’s example of self-isolation. Nevertheless, those of us who really care about the European choice have to be prepared for a serious ideological confrontation.

We need to understand that integration with Europe is a legacy of the pre-war period. It may well be our finest inheritance from the Ukraine of old. However, the old dream has clashed with new challenges and euroscepticism is likely to grow among the impassioned sections of society. Anything at all could become a catalyst for radical disillusionment: an unfortunate outcome to the Dutch referendum, groundless delay in introducing visa-free travel, the EU giving up on Donbas, a hypothetical weakening of anti-Russian sanctions, and so on.

This kind of scenario is convenient not just for the Kremlin. In Ukraine itself there will be any number of people happy to jump on the bandwagon of anti-European sentiment, from nationalist populists seeking a new electoral niche to corrupt politicians trying to hide behind patriotic slogans.

It took the European idea over twenty years to finally defeat the “Russian world” in our country. But will it prove sufficiently competitive if pitched against the Ukrainian world?