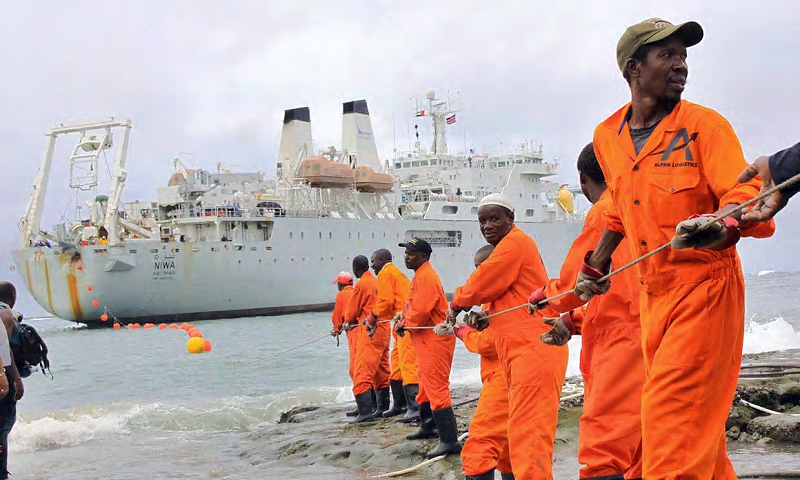 Workers haul part of a fibre optic cable on to the shore at Mombasa, Kenya. ‘Research suggests many African countries are well placed to take advantage of a more open trading environment.’ Photograph: AFP/Getty Images

The article was first published at The Guardian. By Liam Fox

Two hundred and forty years ago, Adam Smith published one of the most important texts ever written. The Wealth of Nations set out his vision of free trade as a pathway to opportunity and prosperity for all; and that in a true open global economy no one need lose out – we all could benefit.

Yesterday I was in Manchester speaking about why I believe his principles are as much alive and relevant today as they were in the 18th century – despite vastly different trading environments.

We stand on the verge of an unprecedented ability to liberate global trade for the benefit of our whole planet with technological advances, such as the internet and e-commerce, dissolving the barriers of time and distance. And because of the brave and historic decision of the British people to leave the European Union, I believe the UK is in a prime position to become a world leader in free trade.

Globalisation represents an acceleration of the trend in which the world has become increasingly compressed, economically, culturally and politically. However, it is becoming increasingly misunderstood and its benefits not championed vigorously enough. While the increased economic activity that globalisation has generated has been broadly welcomed by business, politicians have often worried about how the dissolving concepts of sovereignty will affect their ability to influence events, and many have worried about the effects on the world’s most vulnerable people.

There is no doubt that our increased interdependence can make us more vulnerable to external shocks, with less ability to isolate ourselves from instability in different parts of the global economy. This should not, however, obscure the tremendous benefits that can be brought to those across the globe by a free and fair global trading environment.

According to the World Bank, in the three decades between 1981 and 2010, we witnessed the single greatest decrease in material human deprivation in history. At a time when the population of the developing world has increased by almost 60%, the number of those in extreme poverty (subsisting on less than $1.25 per day) has dropped from around 50% to around 20%.

While this number remains much too high and global poverty is, as Nelson Mandela commented in 2005, an act of man and not an act of nature, we should not be in denial about the potential benefits of globalisation. We should rather try to change the elements within it so that we can produce the biggest positive changes. We must also beware of conflating the drive to eliminate absolute poverty with arguments about relative poverty in already developed nations.

I have always believed that free trade is one of the most powerful tools we have to help those in the greatest need around the world, and that a policy of aid that is combined with punitive tariffs on goods from developing countries is counter-productive at best and downright hypocritical at worst. And as we establish our independent position post-Brexit, we will carry the standard of free and open trade as a badge of honour. Yet free trade by itself will not be enough to be the empowering and liberating tool that many of us want to see.

Research tends to suggest that while trade does indeed reduce poverty, it can only do so effectively with a number of pre-existing conditions. These are: high levels of education, developed financial sectors, and, hugely importantly, good governance and minimal corruption. In a classical Adam Smith analysis, these factors would enable an economy to reallocate resources effectively. The good news is that there are many more developing countries that satisfy the tests.

Back in December 2000, Clare Short, Labour’s international development secretary, said that “globalisation brings with it opportunities and risks. If the poorest people and countries can be included in the global economy on more beneficial terms, it could lead to a rapid reduction in global poverty.”

Research by the World Bank suggests many African countries now meet the necessary conditions and are well placed to take advantage of a more open trading environment. The problem, however, is that while many countries have sufficiently deep financial sectors and sufficiently improved educational systems, many of the institutions and the level of governance still fall below what is required for the poor to benefit fully.

It is not therefore the concept of globalisation, nor the liberalisation of free trade, that should be the target of those who rightly want to see the elimination of the scourge of global poverty but the aims of eliminating corruption and improving governance in many of these developing countries.

Continued focus on good governance, mediated and encouraged by international aid and assistance programmes, combined with increasing attempts to see a more open and liberal trading environment, are our best hope to see grotesque levels of poverty consigned to history.