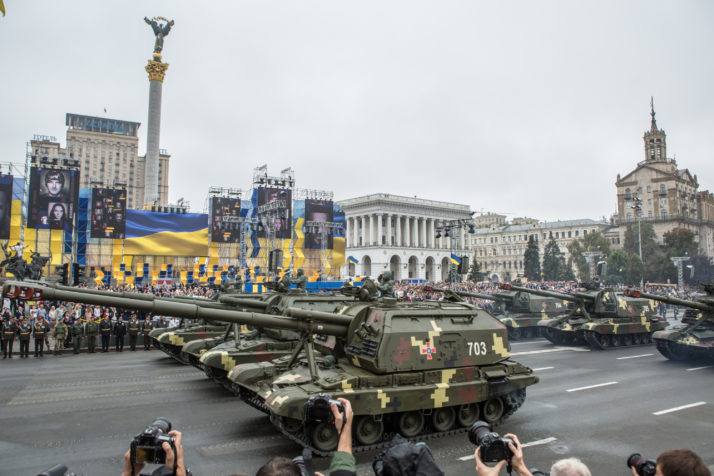 A military parade to celebrate the 25th anniversary of Ukraine’s independence, in August 2016. The fear is that Donald Trump will choose warm ties with Moscow over the exasperation of supporting Ukraine | Brendan Hoffman/Getty Images

The article was first published at Politico. By David Stern

The fear is that the new U.S. president-elect will choose warm ties with Moscow over the exasperation of supporting Ukraine, a country he described during the campaign as a “mess.”

“Biggest loser in the world tonight — Ukraine,” tweeted Michael McFaul, the former U.S. ambassador to Russia. “Your only hope is to get really serious about reform and keep Euros supportive.”

But the EU’s consumed by its own internal problems like Brexit and the rise of its own Trump-like populists, stirring anxiety in Kiev that the bloc is no place to lend a hand.

Ukraine needed to be prepared to go it alone, said Alyona Getmanchuk, director of the Institute of World Policy in Kiev. “Donald Trump’s election is a strong signal that Ukraine should be ready to carry out reforms and resist Russian aggression without U.S. and Western support,” Getmanchuk said. “We’re not in the condition to do this yet, but we need to be ready.”

Faced with the reality of a Trump presidency, Ukrainians clung to the hope that his campaign statements won’t become policy in power.

Trump has a tangled history with Ukraine. His campaign manager, Paul Manafort, was a close associate of Viktor Yanukovych, Ukraine’s deposed pro-Russian president — a link that become so controversial that Manafort was removed from the campaign. Another advisor, Carter Page, has ties to Russian energy giant Gazprom.

Trump was also much less stalwart in Ukraine’s defense than the outgoing administration of President Barack Obama. During a campaign television interview, he equivocated on whether Russia was right to annex Crimea in 2014. “The people of Crimea, from what I’ve heard, would rather be with Russia than where they were,” he said.

During the Republican National Convention, Trump activists were instrumental in changing the party’s platform on Crimea to a position more favorable to Moscow.

Hoping for the best

Faced with the reality of a Trump presidency, Ukrainians clung to the hope that his campaign statements won’t become policy in power. “His answers on Ukraine were an improvisation – he wasn’t prepared for an answer,” said Hanna Hopko, head of the parliament’s foreign affairs committee. “He’s not a traditional politician.”

Ukrainian leaders scrambled to put the best face on the unexpected outcome. “My sincere congratulations to Donald Trump on being elected president of the United States, and to the friendly American nation on their democratic expression of will. This is a symbol of true democracy when nobody knew the results of the elections until the very last moment,” said President Petro Poroshenko.

Others raced to disavow their earlier anti-Trump views. Interior Minister Arsen Avakov scrubbed critical statements from his social media feed, while opposition politician Oleh Lyashko had to walk back a tweet in which he called Trump’s victory “a catastrophe.”

Kiev worries Trump’s apparent warmth toward Russian President Vladimir Putin will be misinterpreted by Moscow. A low-level war against Russian-supported rebels in Ukraine’s east continues to chew up lives and bodies, but the Kremlin has avoided an all-out offensive. That could change if Moscow senses that the threat of tougher U.S. sanctions is receding.

“At the very least, Vladimir Putin will test the situation, the same as he tested President Obama,” said Getmanchuk. “And when he thinks he received carte blanche, he will act even further.”

Hopko said Ukraine’s leaders would need to “work hard” to explain to Trump Ukraine’s position and the threat posed by Russia. “It’s also not in his personal interest to be Putin’s friend — it goes against U.S. interests.”

“We have to respect this new reality,” Hopko added. “We’re afraid to be afraid.”