Ukrainian inner discourses are permanently compromised because most of them are produced by the Russian Federation. The idea of a peacekeeping force by itself exists as if without an alternative, and now there is a discussion about the mandate, number and national composition of peacekeeping troops. But in reality there is no consensus on the hypothetical deployment, and this consensus has never existed. 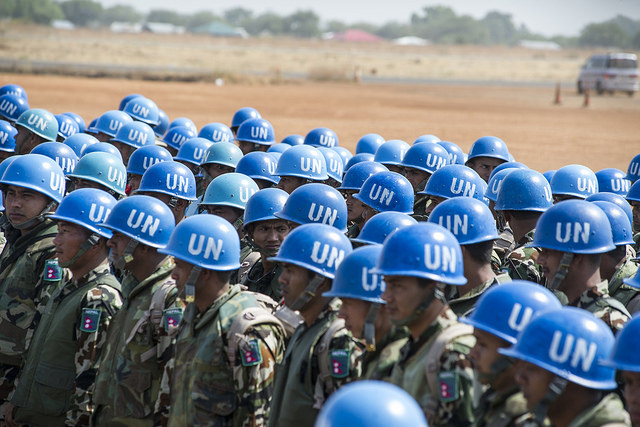 The article was originally published at the New Eastern Europe. By Vitalii Kulyk, Maria Kucherenko from the Center for Civil Society Studies in Ukraine.

If we will turn to history of breaking a lance over this issue, all of these discourses were launched by Putin’s  statement that the UN peacekeeping contingent is a good idea, but only on the line of demarcation and only for “protecting the OSCE”.

Before this, in 2015, when the Ukrainian side approved the appeal to the UN (18.02.2015), and parliament made amendments to the law «About the procedure of admission and conditions of stay of units of the armed forces of other states on the territory of Ukraine», a provision was added that stated the United Nations or the European Union could decide to launch a peacekeeping operation. However, there were no larger debates about the “blue helmets” before Putin’s words.

In fact, in 2015, the rhetoric of the Russian Federation regarding peacekeepers underwent its first changes. Sergei Lavrov, Russia’s Foreign Minister, said that, “Moscow is ready to take part in the discussion regarding peacekeepers in Donbas, if the opposing sides agree to it.” This suggests that the idea of ​​the Russian Federation as a “peacemaker”, emphasizing its status of a “parliamentarian” and an “observer”, was quite possible, taking into account the Russian cult around the “political part of the Minsk agreements”, the repetition of appeals, which we saw in the speech of Lavrov at the Munich conference. And all this time between the Ukrainian initiative (2015) and Putin’s initiative (2017) could have been used to initiate a serious public discussion, to have an opportunity not to proceed from the conditions dictated by Russia in 2017.

But the agenda was formed.  The ways of interpreting this path as without alternative is still influential – through the line of the negotiations between Kurt Volker (US special representative for Ukraine negotiations) and Vladislav Surkov (his Russian counterpart).

Peacekeeping a real or abstract solution?

For some reason, many experts and politicians began to favor a potential contingent attached to Surkov’s statements. This contingent implied that if peacekeeping troops were to be deployed, a “blue helmet transfer in exchange for the political component of the Minsk agreements” would be necessary. Therefore, they are invited to combine all the hypothetical stages of deploying a contingent into one resolution – “so that the Russian Federation does not block the movement of peacekeepers to the Ukrainian-Russian border.” The resolution proposes:

1) Deployment of peacekeeping forces on the demarcation line;

2) Their deployment in the territory occupied by the Russian and pro-Russian militants;

3) Relocation of the peacekeeping contingent to the officially recognized Ukraine-Russia border.

The supporters of such a concept do not see anything wrong with Surkov’s proposals, where they are talking about something looking like Putin’s preferred solution (placing the contingent on the line of demarcation as the OSCE’s “armed guard”), only burdened by a connection to the Minsk agreements in their political part. Surkov directly linked the “phased deployment of the peacekeeping mission” with “the embodiment of the political part of Minsk agreements.” Yes, the Russian special envoy in the talks on Ukraine first made his statement based on the results of the talks with Volker, and therefore the remarks sounded clearer and were replicated by all possible resources, including Ukrainian.

But this approach appears unorthodox: why should representatives of Ukraine repeat Surkov’s thoughts, when the negotiations had a second side, offering a slightly less traumatic option?

Below is the complete and unchanged text transcripts of telephone briefing Kurt Volker had after talks with Surkov, published on the Ukrainian State Department website:

“So the proposal that we put forward last summer was to have a UN-mandated peacekeeping force that would be able to provide security in the area if the Russians were to withdraw. That would create a secure environment, and in that environment it would create the conditions where Ukraine could implement political steps required by the Minsk Agreements. And then once that’s completed, you would have elections, local elections, and the territory would then be restored to Ukraine.

So we see it largely as an implementation mechanism or a transmission mechanism, getting from the current situation to one where the territory is restored to Ukrainian control and the Minsk Agreement is fully implemented.

Russia proposed something very different in September. They proposed a protection force for the monitors that operated only along the line of conflict and did not provide any real security and did not control the Ukrainian side of the Russian border and so forth. So we went over that again in our meeting in Dubai and we talked about how to get from one to the other. How do you start from the situation where we are today, where Russia is occupying and there’s no peace; to one where there is a full peacekeeping force throughout the territory that provides peace and security, and to have that also take place with Ukraine and implementing political steps as required under the Minsk Agreements.

The Russian side I think, as we talked through how to get this done, how it would actually play out, how you would implement that. I think they were more open this time, and I think we had a good conversation and we are now waiting to hear back from the Russian side with their ideas on more specifics, and we’ll see when that happens”.

No return to status quo ante

For Volker, the conflict in Ukraine requires a typical peace settlement: first, the achievement of a permanent ceasefire, then a peacekeeping operation throughout the conflict zone, which, will lead to a transitional administration for the occupied territories of Donetsk and Lugansk, and end with the transferring of power to Ukraine.

Of course, this option is not a panacea. For example, the UNTAES administration for Croatian Eastern Slavonia, Branja and Western Sirmium is enough to understand that under the slogan of “neutrality” and “impartiality” things will be extremely painful for the local population. This can lead to a great amnesty for collaborators and “the administration’s unwillingness to play along with none of the parties,” which is gradually followed by a blurring of understanding of the roles of the parties of the conflict. But the scenario offered by Volcker at least has analogies in situations around the world and is based on some meaningful experience, in contrast to Surkov’s version.

And here a question arises: why choose between a bad and a very bad option, is it necessary to choose the worst? Why did Ukraine not propose that the discussion be held in the framework of a binary opposition?

Debating about “reconciliation” does not make any sense until withdrawal of Russian occupation forces and pro-Russian and Russian paramilitary units, the disarmament of militants, and the total de-separatisation of the region. All players inside and outside the country should avoid illusions: there can be no return to the Ukraine of 2013. No one will forgive and forget.

The recent event in Kiev with the participation of retired Major General Yaakko Oksanen, a UN expert, adds confidence that such statements by Ukrainian experts are a component of preparing the public for the deployment of peacekeepers, which will not solve the existing problems, but will form the status quo in the region for the foreseeable future.

For example, the expert stated that more than 20,000 peacekeepers will not be deployed in the Donbas at all, while even Richard Gowan’s report gives an example of the direct dependence of the number of peacekeepers from the territories occupied by them – according to the expert’s materials, Ukraine offers up to 20.000 people for 17,486 km2 of the territory, while in Kosovo 40,000 (1999) for 10,908 km2, and attention to this violation of the logic of processes is emphasised by Gowan himself.

Oksanen also said that the national composition of the hypothetical peacekeeping mission does not matter, because peacekeepers must be neutral, and in his memory, there are no precedents of violation of the principle of neutrality. Yes, indeed, this condition – the neutrality of the peacekeepers – is directly spelled out by the UN. But, nevertheless, history shows that this principle has been regularly violated, especially by Russian peacekeepers. During the Bosnian war, Rusbat in UNPROFOR known by joint boozes with RVD-2 (a so-called “Russian volunteer detachment” comprised of Russian mercenaries, including the notorious Igor Girkin), which is confirmed by the combatants of RVD-2 themselves. It seems doubtful that such a qualified expert does not know about the violations of the principle of neutrality in practice.

The fact that Gowan’s report (which was discussed in both Munich and Ukraine as a draft of the mandate of the future mission) can be comparable with the activities of the UN assessment mission, seems equally doubtful. The representatives of the assessment mission must firstly visit the conflict zone for a comprehensive assessment of the damage, the alignment of forces, the political situation, etc., in order to understand the future mandate or its necessity.

In other words, it is impossible to get working recipes for peacekeeping, in the Russian-Ukrainian war. All discussions about the proposed deployment of the “blue helmets”, which are currently conducted inside and outside Ukraine, could be useful if, in fact, there was a working agreement on a sustainable ceasefire. As far as we can see now, Minsk agreements cannot follow through with this scenario.

Peacekeepers will not prevent new escalation. During this war we saw that Russia used its territory as a firing point and we don’t have any guarantees that Russia will not repeat such attempts to destabilise the situation. Here in Ukraine there is an issue with understanding the word “peacekeeper”: the Ukrainian equivalent is “peace-creator”. That’s why a lot of people and even experts believe that UN forces will force Russia to pursue peace. Most UN missions are peacekeeping missions. There is an experience of “peace enforcement” missions, but this will not be utilised in the Ukrainian case. Nobody intends to win this war for Ukraine. Those who call for an end to ”the rhetoric of war” simply provoke the further development of this war itself. After all, if the victim of an attack renounces the war, it means that he will refuse to defend himself, thereby giving the attacker the “green light” for the further advance of the occupation troops.

Inflated expectations and misinterpretation of the purpose of such missions will generate not only an increase in frustration and distrust of international institutions and organizations, but also will result in new victims.