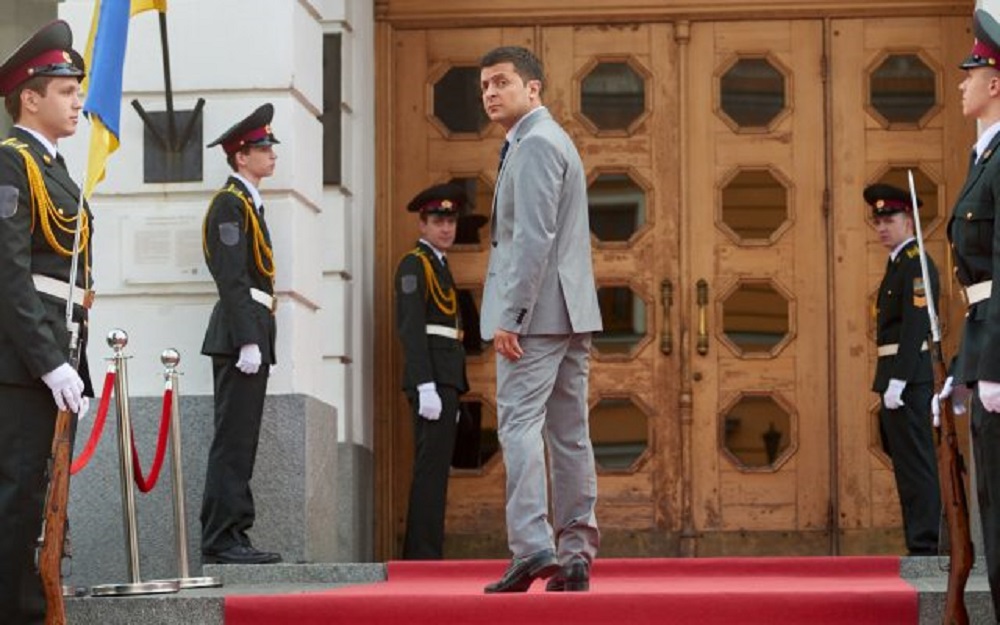 The article was originally published at Dahrendorf Forum.

Ukrainian politics has been dominated by debates over whether to align with Russia or the EU, but Elena Korosteleva says the latest election proves that might be changing.*

The first of April, commonly known as an April Fools’ Day, produced some surprising election results, even by Ukrainian standards. Out of 39 registered presidential hopefuls only two came forth: the stand-up comedian Volodymyr Zelenskiy (30 percent), and the former president Petro Poroshenko (16 percent), with the former prime minister, Yulia Tymoshenko, left behind with only 13 percent of the vote. Some say Zelenskiy has not just won the first round of the election, but also slapped the establishment in the face, taking twice as many votes as the best-known politicians in the country and reducing a pro-Russian candidate Yuriy Boyko to a negligible 11.7 percent. What does this tell us about Ukrainian politics?

Born in the east of Ukraine, Zelenskiy is often simplistically described as a comic “better known for his genital humour” who has no experience of public office. More cynical accounts would link him directly to the controversial Ukrainian tycoon Ihor Kolomoyskiy, who had to flee the country under Poroshenko’s presidency after being accused of dubious financial dealings. Lately, Zelenskiy has also been chastised on patriotically minded social platforms for his criticism of the incumbent and for politically incorrect jokes about Ukraine’s allegiance swinging between the EU and Russia. While there may be some truth to all these accusations, what his victory has come to embody is much bigger than a one-off success of a self-styled Jack-in-the-box entertainer. Zelenskiy reveals a series of symptoms that are likely to define the Ukrainian political landscape for many years to come.

Zelenskiy’s victory may symbolise a closure of the (post-)Maidan spirit, which was ripped apart by the West/East ideological divide in Ukraine. While the Revolution of Dignity may have thrashed out a preference for the EU course in the western part of Ukraine, its aftermath—associated with failure, war, and pervasive corruption—strongly demanded new faces and new mobilising slogans for Ukrainian politics.

During post-Maidan infighting, the young pro-European activists burned off their political capital by supporting the currently incapacitated establishment (Poroshenko’s administration included), while the US-trained radical reformers, led by Anatoliy Hrytsenko, ended up with single-digit support in the presidential race. In contrast, Zelenskiy—an unlikely politician, who mentioned a pro-European course only in passing and repeatedly spoke about the national interests of Ukraine—swooped in with the largest share of votes in the first round of election by simply focusing on Ukraine itself. He seems to have re-articulated the centrality of the country itself, giving its people some hope or at least a glimpse of it.

Somehow, Zelenskiy—an owner of a massive entertainment empire including theatres and weekly shows on TV, and a vocal critic of anything foreign—struck a distinct cord in the hearts of many Ukrainians. He appealed to those who were disappointed with the ‘pro-European elites’ accused of orchestrating painful reforms at high social and economic cost, and presently limited benefits. He equally wooed frustrated pro-Russians, fed up with the ongoing war and a continuing blame-game. In fact, many candidates, regardless of their geopolitical orientation, spoke in their campaign about the hardship and deprivation unleashed on the people by the crisis, but only Zelenskiy succeeded in channelling rising public frustration into his electoral victory, using mockery and self-deprecation.

In addition to his criticism of anything foreign, Zelenskiy is seen as poignantly anti-establishment. In his most popular movie, Zelenskiy’s main character, a school-teacher named Vasily Holoborodko, an accidental president of Ukraine, tells representatives of the International Monetary Fund to “get the fuck out of Ukraine”, ‘reclaiming sovereignty’ for his country.

One could argue that his celebrity status gave him a serious advantage. Although he officially announced his candidacy for the presidential office on New Year’s Eve, his electoral campaign started a decade ago. His show had a clear political message, churning out mockery of the establishment. Without engaging in active political life, Zelenskiy has spent the past ten years or so ridiculing Ukrainian political elites, exposing parochialism of ethno-nationalist western Ukraine, and corruption and authoritarianism of the eastern ’red directors’.

Interestingly, Zelenskiy says he never intended to pursue a political career, but the circumstances lent him an opportunity to express public angst for real change, and that’s what he did—through mockery and entertainment, and without taking any responsibility. Zelenskiy appealed to the people who were frustrated by the exuberant spending of President Poroshenko and his broken promise to put an end to corruption. He equally attracted those who were simply tired of infighting and incessant war. His most recent movie, “A Servant of the People”, revived a forgotten aspiration for ‘the good life’—a fairy tale for adults about the role of a ‘small person in power’ who could change the world.

Deploying mockery through entertainment, Zelenskiy skilfully harnessed the frustration of the Ukrainian public. While Poroshenko, using patriotic narratives, appealed mainly to a segment of western Ukrainians and the Ukrainian diaspora in Europe and the US, Zelenskiy’s electoral programme was a ‘broad church’ of promises to the disillusioned. He avoided the trappings of traditional politics and instead brought his mockery of the system onto an international stage, turning politics into entertainment, similarly to Trump. He succeeded in forcing the former president to do a blood and urine test in public and commit to a stadium debate with a comedian, while requesting that the losing candidate Yulia Tymoshenko host it.

Through these almost surreal demands he represented the left-out ‘other’ Ukraine, with its apolitical and cynical attitude to politics, wallowing in corruption and broken promises. His mockery overcame the West-East dichotomy and a standoff between the pro-European and a pro-Russian projects of the establishment. Instead, he brought entertainment into politics, and his political campaign made Ukraine central again.

What we see today in Ukraine, exposed by this presidential race, is emblematic of a wider trend in global politics: disillusionment with the establishment, rejection of aspirationalism, and mistrust of progress. While western democracies may suffer some hiccups on the way to stabilising their otherwise-functioning systems (though this is now questionable too), Ukraine presents a different case. Devastated by war and hardship, corrupt and losing faith in its politicians, what future could it offer to its increasingly disenfranchised people? One only hopes it is not going to be of external making. It is high time for Ukraine to become resilient and reinvent itself.

*The author wishes to thank Dr Samokhvalov for sharing his ideas in the process of writing this article.

Elena Korosteleva is Professor of International Politics and Jean Monnet Chair of European Politics, at the School of Politics and International Relations, University of Kent. She is the Principal Investigator of the GCRF COMPASS project, and LSE Ideas Visiting Professor.